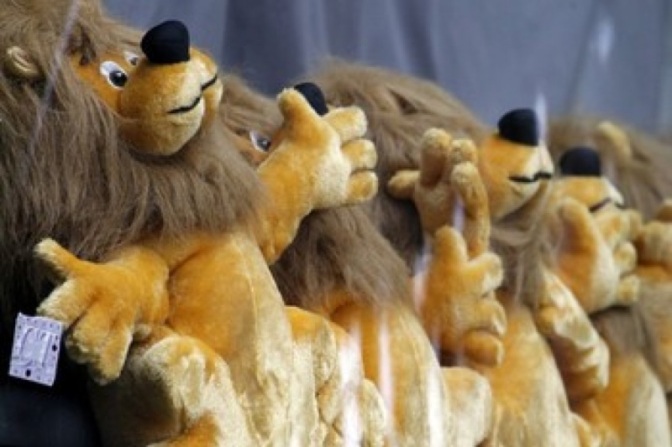 A = Alpe d’Huez. The legendary Alpine climb with its 21 hairpin turns will be climbed twice in one day for the first time in Tour history this year. (It has appeared twice in the same Tour once before, in 1979.) It last appeared in 2011, when Europcar’s Pierre Rolland won the stage. END_OF_DOCUMENT_TOKEN_TO_BE_REPLACED

Just three years after David Brailsford of Team Sky stated his team’s intention to win the Tour de France with a British rider within five years (a statement that was received with a mixture of mirth and scorn at the time), Bradley Wiggins has fulfilled that dream. In fact, not only has he become the first British rider to win the Tour de France, but this year’s runner-up, Chris Froome, is also British and another potential future Grand Tour winner for Sky.

Wiggins, who placed a surprising fourth in the 2009 Tour, started this year’s Tour with impeccable credentials, winning Paris-Nice, Tour de Romandie and Criterium du Dauphine. No one, not even the insatiable Eddy Merckx, has won all those races and the Tour de France in the same year. And the season’s not yet over, Wiggins is hoping to add to his already impressive Olympic track medal tally – 3 gold, 1 silver, 1 bronze  – with a gold for the individual time-trial at London 2012.

After crashing out early in last year’s edition, Wiggins started this year’s Tour as odds-on favourite – the first genuine British contender for overall victory since Tom Simpson in the 1960s. He was determined to seize the chance to cement his place in cycling’s hall of fame, as he explained: 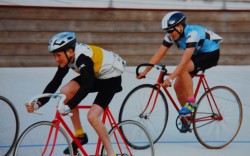 Since I was 12, I always thought about winning the Tour, but never maybe thought that it would be a reality. The team’s preparation has been perfectly managed and our form this season gives us a great chance of being successful. I’ve been waiting for this moment for a long time and I’ll do everything I can to win the Tour de France.

When Wiggins took the leader’s jersey on stage seven he joined a short, but illustrious list of British cyclists who have worn the yellow jersey: Tom Simpson, Sean Yates, Chris Boardman and David Millar. But their tenure in yellow was fleeting and none came close to triumphing in Paris. Indeed, Wiggins started rewriting the history books by stage 14, when he surpassed Boardman’s previous British record of six days in yellow. An avid fan of cycling history, it’s possible Wiggins has drawn inspiration from Simpson, one of his childhood idols and the first British rider to claim the race leader’s jersey in 1962. Simpson’s achievements paved the way for English-speaking competitors in a sport previously dominated by Europeans. 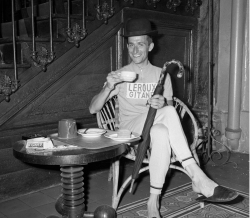 Simpson’s name will forever be associated with the tragic events that unfolded five years later in the fierce Provencal heat on Mont Ventoux, where he collapsed and died. However, it was Simpson’s bold and impulsive riding style – panache as the French would say – as well as his charm and charisma off the bike that catapulted “Major Tom” to fame both in Continental Europe and at home.

Narrowly missing out on the yellow jersey on his Tour debut in 1960, Simpson cemented his reputation with the fans and the press as a potential Tour winner. Having abandoned injured in 1961, he arrived for the start of the 1962 Tour in mint condition, physically and mentally, newly signed to the experienced French Gitane Leroux team. On 5 July, he became the first British cyclist ever to wear the maillot jaune, after the first high mountain stage of the Tour. Although he wasn’t a dynamic climber, he managed to stay with the leading group, which was enough for him to ride into the history books. That evening, former rider-turned-journalist Jean Bobet declared:

This is an historic day for cycling, even more so for English cycling!

Although he lost the jersey the following day, it instilled in him a belief that he might one day stand on the podium in Paris. But Simpson’s fundamental problem was his impulsive, almost reckless instinct to attack and push himself to his limits. However, the sport’s most demanding event is won by a cyclist who can sustain a controlled pace, and who knows when to attack his nearest rivals and, perhaps more importantly, when not to attack. [That sounds familiar – Ed]

In his 1966 autobiography, Simpson said something that must surely resonate with Wiggins:

I would like to win the Tour de France, but I cannot afford to have any bad luck, such as in the past attempts. If I fail it will not have been for the want of trying. As I look back now, all the sacrifice, aches and disappointments seem worth it, although I sometimes wonder if I could go through it again. Disappointments are always hard to bear at the time but common sense tells you that there is always another day tomorrow for you to have another go. 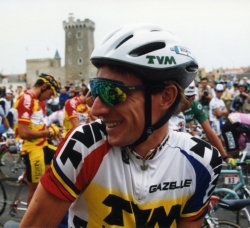 In 2009, Wiggins finished the Tour in fourth place much to the surprise of many. In so doing, he matched the feat of Scotland’s Robert Millar, who recorded a similar result in the 1984 Tour as well as winning King of the Mountains. Millar wore the polka-dot jersey the previous year when he’d won a stage not unlike this year’s stage 18 from Pau to Bagneres du Luchon. He managed to outdistance more celebrated climbers over those fearsome, famous Pyrenean climbs to take the stage, and become the first British rider to wear the polka-dot jersey, albeit for a few days.

Millar loved the Pyrenees and this is where he won all three of his Tour stages, his last being in 1989. Although Millar’s stage win in 1983 represented the first won by a Scot, it was the fourth stage win by a Brit, with Barry Hoban, Brian Robinson and Michael Wright winning stages in previous years. But Britain’s cycling heritage goes back even further.

Rolling back the years 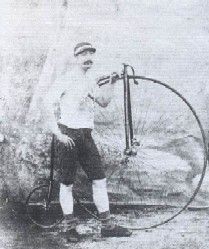 Britain’s James Moore (who shares my birthday) was the winner of the world’s first official cycle race,  held in 1868 at St Cloud, Paris; he followed this up with a win in 1869 in the world’s first road race, Paris-Rouen, covering the 113 km distance in 10 hours and 25 minutes. He would become one of the first cycling superstars, dominating competitions for many years.

The first British rider to take part in the Tour de France was Charles Holland (a fellow Brummie), who started the 1937 Tour as a member of the British Empire team with Londoner Bill Burl and French-Canadian Pierre Gachon. The latter abandoned on the first day while the former was eliminated on day two for being too far behind. The French took a liking to “Rosbif” Holland, calling him Sir Holland and providing him with accommodation and mechanical assistance. But he was forced to abandon the race after 15 days when, in the mountains, he suffered a series of punctures and mechanical problems that left him stranded.

The British returned to the Tour post-war in 1955. Two of the riders from a British team sponsored by Hercules, the Birmingham-based bicycle manufacturer, made it to Paris, which, given their relative inexperience was an impressive feat. Robinson placed a very respectable 29th while Tony Hoar was Britain’s first Lanterne Rouge. Consequently, you could legitimately claim that Robinson was the first Briton to finish the Tour.

Within weeks of the Tour, however, the Hercules team had imploded and the following year Robinson rode for an international team, finishing 14th, his best overall result. In 1957, he rode for St Raphael and the following year became the first Briton to win a stage of the Tour de France, after having attacked just 50km into stage 7 to Brest, with Arrigo Padovan. Although Padovan actually won the stage, he was disqualified for unsportsmanlike conduct, thus handing the victory to Robinson. Robinson followed this up with another stage win in the 1958 tour while riding for a Luxembourg-Mixed nationality team. Again, he attacked early, this time on his own, and went on to win by more than 20 minutes.

Back to the future

More recently, most of Britain’s stage wins – Sean Yates, 1988; Chris Boardman, 1994, 1997 and 1998; and David Millar, 2000 and 2003 – came in prologues or time-trials. Millar, however, also won two road stages, one from a breakaway in 2002 and the latest, also from a breakaway, on stage 12 in this year’s Tour. It was his fourth Tour victory and came after three other British stage wins, by Froome, Wiggins and Cavendish. GB’s haul increased to seven overall with wins on the last three stages – another national record.

On this year’s final weekend at the Tour, Mark Cavendish was named the best sprinter in Tour history, an accolade one would imagine being handed out at the end of someone’s career, not part way through it. By the end of the Tour this year, he has totalled 23 stage wins and he is surely the rider most likely to break Merckx’s career record of 34 Tour stage wins. His fourth consecutive win on the Champs Elysees represented the first time that stage has been won by the current World Champion.

Now, it’s only left to wonder who will be the second British winner of the Tour – and when?!

Are we on the verge of a golden era of British road cycling? While Mark Cavendish, Chris Froome and Bradley Wiggins grab the headlines and the attention of casual fans, it is the strength in depth of British riders which is raising eyebrows among the cognoscenti. While Cavendish was winning a brace of stages at the Tour of Qatar last week, 21-year old Andrew Fenn (Omega Pharma-Quick Step) bagged a double at the Mallorca Challenge, while Endura’s Jonathan Tiernan-Locke won two stages plus the overall classification at the Tour Mediterraneen. It was an unprecedented week of success for British cycling.
END_OF_DOCUMENT_TOKEN_TO_BE_REPLACED