March sees the European racing season really hit its stride with one big race after another throughout the month. All the big names will come out to play, with two major stage races early in the month followed by the first two of the Monuments, the five most prestigious one-day Classics on the calendar. Nearly a quarter of the 2013 WorldTour events (seven out of 29) take place in this month alone. Here’s a quick preview of March’s key dates.

Let’s kick off with the seven WorldTour races this month. After January’s little amuse-bouche of the Tour Down Under, March brings us the two biggest stage races of the spring, each of which represents a key stepping stone ahead of the Grand Tours. Last year the winners of these two events both finished on the Tour de France podium: Paris-Nice (3rd-10th) was the first of Bradley Wiggins’ four stage race victories, the last being his Tour triumph, while Tirreno-Adriatico (6th-12th) was won by Vincenzo Nibali, who went on to add podium finishes at Milan-San Remo and Liège-Bastogne-Liège en route to a third-place finish in Paris.

Milan-San Remo (17th), of course, is the first of the five Monuments. The so-called ‘Sprinters’ Classic’ will also be targeted by stage racers and puncheurs – Nibali and Fabian Cancellara were third and second respectively last year – with the late climbs of the Cipressa and Poggio offering big attacking opportunities. Peter Sagan has openly stated this race is his main target for the spring, but watch out also for previous winners Simon Gerrans (2012), Matt Goss (2011) and Mark Cavendish (2009), as well as rising sprint star John Degenkolb.

From the Friday after Milan-San Remo to the Sunday of the following week comes the trio of Flandrian Classics which were all won by Tom Boonen in 2012: E3 Harelbeke (22nd), Gent-Wevelgem (24th) and the Ronde van Vlaanderen, or Tour of Flanders (31st). Each of these offers a testing combination of cobbles and punchy climbs which favours those who can best combine power, speed and sheer guts, or those brave enough to seize an unexpected opportunity with both hands.

In between we also have Spain’s second-most important stage race. The Volta a Catalunya (18th-24th) is a daunting, mountainous event which is generally won by a climber.

Outside of the WorldTour events the calendar is brimming with races – the UCI Europe Tour alone has 35 races in March. The key one-day races to look out for are everyone’s favourite nouveau-Classic, Strade Bianche (2nd), with its iconic images of the peloton kicking up clouds of dirt from the white gravel sterrati which give the race its name, and Dwars door Vlaanderen (20th), the warm-up act before the three major Flanders races. There is also the two-day, three-stage Criterium International (23rd-24th) – held on Corsica, where the 2013 Tour de France will kick off – and the Three Days of De Panne (26th-28th). The winners of these four races in 2012 were, respectively, Fabian Cancellara, Niki Terpstra, Cadel Evans and Sylvain Chavanel, which provides an indication of how prestigious each of these events is despite lacking WorldTour or Monument status.

For some reason, March is a relatively barren month in terms of rider birthdays, with several teams requiring no cakes and candles whatsoever until April. Indeed, many of the more notable birthday boys are of the climbing rather than sprinting persuasion. Make of that what you will. 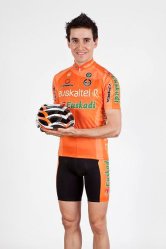 We’ll start with perennial Vuelta and Ardennes Classics contender Igor Anton (Euskaltel-Euskadi), who turns 30 tomorrow, the 2nd. He shares his birthday with Sylvester Szmyd (Movistar), one of the most feared climbing domestiques in the business, who will be 35. Add to that Szmyd’s teammate Benat Intxausti, who was tenth in last year’s Vuelta and will be 27 on the 20th, and 2012 Tour of Luxembourg winner Jakob Fuglsang (Astana), who will be celebrating his 28th birthday on the 22nd and you already have the makings of a formidable fantasy cycling mountain train.

March also sees the birthdays of a couple of notable stage winners from the 2012 Vuelta. BMC’s Steve Cummings won one of the few non-summit finishes with a gritty late solo breakaway, while Dario Cataldo (Sky) won the punishing finish at the top of Cuitu Negru. The pair will turn 32 and 28 respectively on the 19th and 17th of the month.

Also celebrating this month will be two men who are more comfortable on flat roads than sloping ones. Europcar’s Sebastien Chavanel – younger brother of Sylvain and husband of VeloVoices guest columnist Sophie – will be blowing out 32 candles on the 21st. Meanwhile Lampre sprinter Roberto Ferrari, who was as well-known for causing a major crash at last year’s Giro as he was for later winning a stage, marks the big three-oh on the 9th.

Oh, and lest Kitty thinks I’ve forgotten, some fella named Fabian Cancellara (RadioShack-Leopard) will be 32 on the 18th. He’s won a race or two in his time, apparently.

Happy birthday one and all!

We know how obsessive cyclists can be about their food, so later this month Sheree will be starting up a new weekly recipe column, The Musette, packed full of healthy and delicious dishes.

This adds to our stable of regular features. Every fortnight(-ish) brings our VeloVoices podcast on Mondays and AntBanter on Thursdays, in addition to Kitty’s Tweets of the Week (every Tuesday) and Tim’s Talking Tactics (every Wednesday). Plus, of course, there’s our weekly Friday Feature, where we aim to bring you the best in interviews, photography and other exclusive content. The month kicks off with an interview with photographer Rhode Van Elsen, available later today.

And we’ll continue to keep you up to date with the very best race reviews, analysis and opinion, with coverage of all seven WorldTour races plus selected others, starting with Strade Bianche tomorrow (Saturday).

Whether serious or light-hearted, VeloVoices is the place to come for all the latest cycling news and views! Pro cycling for fans, by fans.

The 95th Giro d’Italia starts tomorrow (Saturday) without the man who won last year’s race ‘on the road’: Alberto Contador. Indeed, the race begins with only the newly crowned Michele Scarponi present of the three current Grand Tour champions – the 2011 winners of the Tour de France (Cadel Evans) and Vuelta a Espana (Juan Jose Cobo) are also absent. END_OF_DOCUMENT_TOKEN_TO_BE_REPLACED

Pocket rocket Domenico Pozzovivo (Colnago-CSF Inox) took the biggest win of his career  – his first for two years – and recorded a prestigious victory and welcome boost for his ProContinental team ahead of the Giro d’Italia, when he emerged victorious to win the 36th edition of the Giro del Trentino. In addition, he won both the third stage and the mountains classification.

With the exception of the team time trial on stage one, won by BMC, this really was a race for diminutive mountain goats – the more diminutive the better.  On the queen stage three, we were treated to that rare spectacle, riders in 34×29 granny gears, moving as if in slow motion, up the 15% average gradient along little more than a track to Punta Veleno. Runner-up Damiano Cunego (Lampre-ISD) said it was even worse than the Zoncolan! Sylvester Szymd (Liquigas-Cannondale) rewarded his team’s efforts by hanging onto third place overall. END_OF_DOCUMENT_TOKEN_TO_BE_REPLACED