All of Belgium and indeed cycling fans everywhere are #ReadyToRonde. The Ronde van Vlaanderen (Tour of Flanders) is one of the sport’s biggest and most iconic races. This year, like most of the Spring Classics so far, the bitter winter weather could be a competitor that takes a few riders out of the running. However, two men who might just be stronger than snow and ice are Fabian Cancellara and Peter Sagan, the overwhelming favourites for the race.

The Ronde is one of the hardest one-day races in the cycling calendar – many say the hardest – and is one of the five Monuments. It has acquired legendary status among both riders and spectators throughout its 97 starts – Belgians love their cycling races and this, in particular, holds a passionate place in their hearts. With its gruelling parcours and its iconic cobbled climbs, come rain or snow, sun or sub-zero temperatures, fans take to the roadside to cheer on the riders. It is, quite simply, a race like no other.

Winners in the last five years:

Tom Boonen continued his Spring 2012 Domination Campaign™ by taking on the new parcours and taming it under his wheels. Once Cancellara had been felled by a stray bidon, riders started to zero in on Boonen. After an audacious attack by Alessandro Ballan (BMC) on the Paterberg that put the Belgian under pressure, the two riders broke from the group with just Filippo Pozzato (Farnese Vini) for company. Under the flamme rouge, the three played cat and mouse, with Boonen sweeping past both men to take a hard-fought race in a straight sprint to take the third Ronde of his career. By the way, just check out who came in fifth …

Click here for our full review of last year’s race.

This year’s race takes on the same parcours as last year, with the Kapelmuur and Bosberg once again taken out of the equation. Brugge is the starting point for the 255km race and Oudenaarde its finish. In between, the riders have 17 climbs of varying gradients to get over and 18 cobbled sections of varying lengths to negotiate. The last 75km consists of three circuits that include the Oude Kwaremont and the Paterberg, which are the final two climbs of the race before the road flattens out and smooths over in time for a sprinting shootout if a rider hasn’t ridden away from the bunch before then. Last year, Ballan almost slipped away on the final climb of the Paterberg with Boonen nearly on the limit, while the Kwaremont was the launch pad for Cancellara’s solo win in E3 a week ago so the strong riders will want their teams to pummel their competition on the climbs and cobbles before the final circuit so the killer blow can be dealt on the final ascents.

Just as last year saw two favourites head and shoulders above the rest (Boonen and RadioShack-Leopard’s Fabian Cancellara) so it is this year – this time with Cannondale’s Peter Sagan replacing Boonen in that duo. Boonen has put in some strong rides during the Three Days of De Panne this week, but his various injuries throughout the run-up to this race means that his preparation has not been as comprehensive as that of his main rivals.

With both Cancellara and Sagan victorious last week, Boonen will have his work cut out for him on Sunday. That said, if the two favourites mark each other out, there could be a Belgian national jersey swooping past for the win.

But there aren’t just two men riding this race. So who might be quietly wheeling themselves into a potential winning position while the peloton watches and waits for the dynamic duo? French national champion Sylvain Chavanel (Omega Pharma-Quick Step) is fresh off his win in the overall at Three Days of De Panne and with his confidence up and nonchalance in the face of cold conditions, the peloton would be foolish to ignore him.

Astana rider Borut Bozic finished second in both Dwars door Vlaanderen and Gent-Wevelgem so he’ll be tackling this race with gusto. BMC are again fielding Thor Hushovd with Gent-Wevelgem’s third-place finisher Greg Van Avermaet and Marcus Burghardt on the team, but no PhilGil or Taylor Phinney. Gilbert has bowed out due to a cold and the fact that he’s targetting the Ardennes Classics in April while Phinney is nursing a nagging knee injury and has opted to rest up to be fresh for next week’s Paris-Roubaix.

Lotto Belisol are fielding Lars Bak and Jurgen Roelandts, who might make a splash, while Orica-GreenEDGE have hardman Stuart O’Grady on the roster along with Matt Goss. Can the experienced O’Grady win this with a bit of well-timed cunning and guile? It’d be heartening to see. 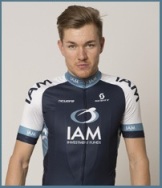 Sky are fielding a team not unlike last weekend’s, with Edvald Boasson Hagen, Bernie Eisel, Ian Stannard and team leader Geraint Thomas looking to chalk up a victory in what has been a disappointing Classics season so far for the team. Heinrich Haussler (IAM) and Juan Antonio Flecha (Vacansoleil) have been noticeable in the peloton the past few weeks but ultimately with nothing to show for it so don’t be surprised if Flecha launches an attack joined by Haussler. With the timing of an attack especially crucial in this race, they might just pull it off.

And last but not least, Oscar Gatto (Vini Fantini), this year’s Dwars door Vlaanderen winner, could pull off the biggest win of his career if he was in the right place at the right time. My, my, the Fantini would Glow for days … 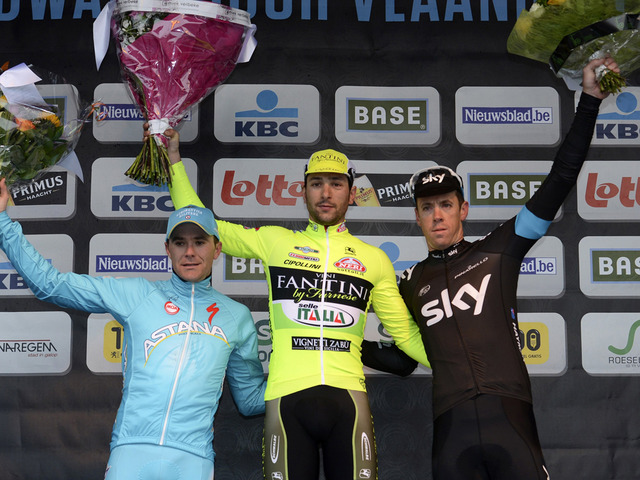 Oscar Gatto timed his finish to perfection, sprinting past a tiring Thomas Voeckler and taking him just metres before the line in Waregem. Slovenian Borut Bozic and Aussie Mattew Hayman were second and third as a devastated Voeckler faded to fifth.

While not quite as thrilling as Sunday’s epic Milan-San Remo, it did reinforce the ambitions of a number of teams and riders. And it’s yet another race won by a ProConti team: Kitty’s beloved glow sticks, Vini Fantini. I thought it appropriate that, despite the cold and wet weather, the Italian victor was wearing just a short-sleeved jersey and shorts. I wonder if the spectators were chanting “Are you Belgian in disguise?” 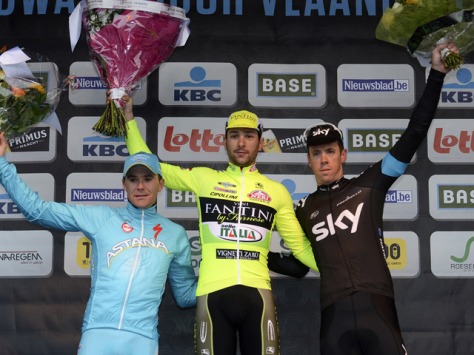 Dwars door Vlaanderen is a race of two halves: the first one flat, the second hilly and cobbled. It’s one of the warm-up events – a semi-Classic – for the forthcoming cobbled Belgian Classics. Niki Terpstra (Omega Pharma-Quick Step) was back wearing the number one bib and with plenty of firepower on his team to help defend his title.  Not so a number of other one-day specialists who, still suffering from the exigencies of Milan-San Remo, had opted out of competing in the cold, wet conditions so typical in Belgium at this time of year. 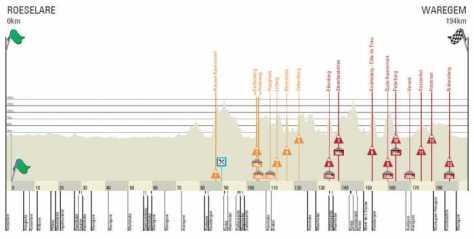 Probably in an effort to keep warm, the attacks came thick and fast in the opening kilometres of the race. Initially 13 riders, all from different teams, made the initial break but the peloton was in no mood to let anyone off the leash. A number of those riders persisted and eventually a group of 14 slipped the reins on the Nieuw Kwaremont.

Cofidis’ Romain Zingle led solo over the Berendries, then a group from the original break including Gert Steegmans (Omega Pharma-Quick Step), Aleksejs Saramotins (IAM) and Mathew Hayman (Sky) – bridged, steadily buiulding an advantage of around 90 seconds with 70km left to ride. With no one taking control of the bunch and its pace disrupted by a number of minor crashes, a couple of counter-attacking salvos were fired, largely by Europcar.

Hayman took a flyer from the leading trio and built a small advantage on to the Oude Kwaremount with 25km to go. Behind him, Maxim Iglinskiy (Astana), showing no after-effects from his endeavours at the weekend, had launched an attack from the chasing bunch and was followed by a group including Gatto, Borut Bozic (Astana), Thomas Voeckler (Europcar), Stijn Vandenbergh (OPQS), Ian ‘Hard as Nails’ Stannard (Sky) – another protagonist from Sunday – and Jens Keukeleire (Orica-GreenEDGE). Vandenbergh took charge of the pace-setting only to end up pursuing Hayman on his own as riders were shelled out the back of this chasing group.

With teammate Hayman up front, Stannard initially tried to block the chase but finally led the small chasing pack in pursuit of the leading duo who were soon to be joined firstly by Gatto, then the remaining seven riders making it a ten-man leading pack with 14km still to race and only a 30-second advantage over the peloton.

After the final climb, the Nokereberg, both Keukeleire and Stannard tried unsuccessfully to distance the others. Finally, Voeckler launched one of his trademark attacks amid much face-pulling and he managed to gain just under 20 seconds on the hotly pursuing nine-man pack with only 3km on the flat remaining. Was Tommy home and dry? Vandenbergh and Stannard had other ideas. They slowly whittled away at his lead, providing Gatto, Bozic and Hayman with the perfect launchpad in the dying metres.

After the race, the victor Gatto admitted:

Coming into the last kilometre, I thought Voeckler would make it, to be honest. I took Stannard’s wheel because I had seen how strong he was at Milan-San Remo on Sunday. He went to the front inside the final kilometre which meant that I had to launch my sprint from a long way out.

While a disappointed Voeckler explained:

I started getting cramps in the last 100 metres. I thought I was going to make it, but I could see Stannard pulling in the last kilometre. It’s a pity but that’s racing.

Indeed it is, Tommy!

This is typically one of those races where a rider who’ll be expected to ride in support of his team leader in the upcoming Classics is given an opportunity to ride for himself. Coming so close after an epic Milan-San Remo, and also held in inclement conditions, is it any wonder that the hard men of the peloton prevailed? While it was something of a war of attrition, the podium did feature a rider (Hayman) who had been in the break for most of the day. The other two had remained alert to the possibilities and joined what was to prove the decisive break engineered by Iglinskiy. Many of those who animated the race also figured prominently at the weekend and one would have to conclude they’re in fine form for the forthcoming challenges. Bring on more of those cobbles!

Decisive attack led by Maxim Iglinskiy. Look out for him in forthcoming races (image courtesy of Astana)

Formerly known as the tongue-twister that was E3 Prijs Vlaanderen-Harelbeke, this year’s E3 Harelbeke is the 55th edition – but the first as a WorldTour event. This – and Sunday’s Gent-Wevelgem – is seen as a warm-up event for the brutality of the Ronde van Vlaanderen (Tour of Flanders) and Paris-Roubaix later in the month.

Defending champion Fabian Cancellara will be back to defend the title he won with a dramatic solo ride last year.
END_OF_DOCUMENT_TOKEN_TO_BE_REPLACED