The second half of the Tour of Britain demonstrated that you don’t need 2,000-metre hors catégorie mountains to produce exciting racing. A combination of short, sharp climbs, undulating terrain and testing winds proved more than sufficient to shatter the peloton repeatedly. It was a situation in which Endura’a Jonathan Tiernan-Locke thrived, seizing the gold jersey on stage six and defending it with verve all the way to the finish in Guildford to take his fourth overall GC victory of 2012.

UnitedHealthcare’s Marc de Maar, the national champion of Curacao, reaped the rewards of a well-timed solo attack to take victory as Sky’s challenge for the gold jersey imploded on an undulating stage which shredded the peloton.

As always, the Stoke stage resulted in a lively day’s racing. Eight men, including the omnipresent Kristian House (Rapha Condor) went clear ahead of the first climb of the day. House gained a useful four points for third place at the summit to consolidate his lead in the King of the Mountains competition.

Ivan Basso (Liquigas-Cannondale) and Bernard Sulzberger (Raleigh) subsequently broke clear, before Basso decided to briefly go it alone before being hauled back in at 40km. By this time, race leader Mark Cavendish (Sky) and several others had been distanced in the windy conditions over the rolling hills, leading to Bradley Wiggins sitting up to wait for him. However, Cavendish was much further behind than first thought. Stranded, the pair would eventually roll in nearly 12 minutes down, and Wiggins would then abandon overnight with a stomach bug.

By the time the race reached the final categorised climb, the cat 1 Gun Hill, the lead group was down to 27 and was stressed even further when Jonathan Tiernan-Locke (Endura) attacked on the ascent. The leaders regrouped, but then De Maar, Paul Voss (Endura) and Jeremie Galland (Saur-Sojasun) overcooked a right-hander with 9km to go. Galland crashed heavily, fracturing his collarbone, but De Maar was able to quickly chase back on and then launch a solo attack just inside 7km. With the group seemingly happy to cut him some slack he emptied the tank, establishing an 18-second lead and winning with ease. Sep Vanmarcke (Garmin-Sharp) won the sprint for second 15 seconds later ahead of De Maar’s teammate Boy Van Poppel, to move up to third and second overall respectively. Howard finished immediately behind them to reclaim the gold jersey by seven seconds.

After the stage, De Maar explained how he had nearly abandoned the race after an eventful opening couple of days:

I started off in crashes on the first two days so I kind of lost my motivation because I came here to do something in the GC. Luckily my team director coached me through the last few days as I was almost thinking of going home but luckily I didn’t as I won a stage today.

It took some effort to stay away but as soon as the finish came closer I started to believe in it and all of a sudden I had some extra percentage to put on my pedal. I am really proud of myself. Still can’t believe it, too much excitement going on but I am sure we’ll get back to the hotel and realise what is going on.

The queen stage of this year’s race featured four first-category climbs in the back half, including two ascents of Caerphilly Mountain close to the finish. Endura’s Jonathan Tiernan-Locke, fifth last year, lost out in the sprint for stage victory to NetApp’s Leopold Koenig, but achieved his primary objective of wresting the gold jersey off the back of Leigh Howard. 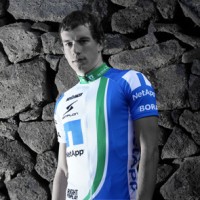 Koenig clinched his second win of 2012 (image courtesy of NetApp)

Kristian House yet again featured in the day’s six-man break, snaffling the ten points available on each of the first two climbs of the day without being challenged to extend his King of the Mountains lead over Pablo Urtasun (Euskaltel-Euskadi) to a near-unassailable 42 points. The escape’s lead stretched out beyond seven minutes but the peloton always had the chase well under control despite Sky and Endura forcing a split inside the last 60km.

On the first loop up Caerphilly Mountain the lead group quickly disintegrated to leave just House and Graham Briggs (Raleigh) out front. Behind them, Tiernan-Locke stretched his legs and eased away from the chasing group, moving into the lead near the summit with 12km to go. Koenig sat on his wheel all the way up the climb second time around before easing ahead on the downhill finish and sprinting clear to take the win. Garmin-Sharp’s Nathan Haas won the sprint for third from an 11-man group some 19 seconds back, while the top two overnight, Howard and Boy Van Poppel, were gapped on the run-in and finished at 33 seconds.

The net result was that Tiernan-Locke jumped from sixth to first overall, 13 seconds ahead of Howard, with Haas now third, a further five seconds behind.

Euskaltel-Euskadi’s Pablo Urtasun claimed both the stage win and enough points to keep his slim King of the Mountains hopes alive as race leader Jonathan Tiernan-Locke consolidated his position at the top of the standings ahead of Sunday’s final stage.

Urtasun had been part of a high-profile five-man breakaway which slipped away after the first climb of the day. Joining him in the escape were teammate Samuel Sanchez, Ivan Basso (Liquigas-Cannondale), Jerome Coppel (Saur-Sojasun) and stage five winner Marc de Maar. They were subsequently joined by five other riders, with Urtasun taking maximum points over the day’s two first-category climbs, but ultimately it was the original quintet who would contest the finish.

Coppel yo-yoed on and off the back of the group before being finally dislodged with 6km to go. Sanchez, too, fell away only to regain touch in time to support his teammate on the descent to the line. The former Olympic champion led out the sprint, Urtasun sat on De Maar’s wheel and came around him in the closing metres to take the win. Basso was third, Sanchez fourth.

Behind them, Tiernan-Locke led the chase off the front of the peloton, eventually splitting off the front with a small group which included third and fifth-placed Nathan Haas and Damiano Caruso (Liquigas) but not Leigh Howard or Boy Van Poppel, second and fourth overnight. With the race leader setting an impressive tempo to lead the chase without help, they would finish just 46 seconds behind the winner, with NetApp’s Leopold Koenig eight seconds in front of them after a late and unsuccessful effort to bridge across to the leaders. The Englishman extended his race lead to 18 seconds over Haas, with Caruso at 23 seconds the only other genuine threat for overall victory.

The final stage gave British fans four good reasons to celebrate as home riders secured three jerseys and the stage win. Node4-Giordana’s Pete Williams started the ball rolling by getting into the four-man breakaway, which effectively confirmed him as the winner of the sprints classification. Similarly, with Pablo Urtasun missing out on the break, Rapha Condor’s Kristian House clinched the King of the Mountains competition. The break built a three-minute lead – helped by the peloton being delayed at a railway crossing – but their cause was always going to be a forlorn one.

They were briefly given hope inside the final 50km when NetApp’s determined pace-setting – in an effort to gap Mark Cavendish and set up something for Leopold Koenig – fractured the peloton on the final cat 1 climb, which featured sections of up to 20%. But with both the reformed peloton and an intervening chase group closing in, Jack Bobridge (Orica-GreenEDGE) soloed off the front with 32km remaining and quickly pulled out a gap of around 20 seconds. However, with Sky measuring their effort carefully, he was reeled back in at the 12km mark. Solo counter-attacks by Gediminas Bagdonas (An Post-Sean Kelly) and Urtasun proved short-lived, and Sky brought the race back together with 6km to set up the bunch finish.

Luke Rowe opened up the lead-out in the final 500 metres on the uphill, cobbled drag of Guildford’s high street. As he had done before, Cavendish eased off to find more wheels to follow – in this case Endura’s Russell Downing and Liquigas’ Fabio Sabatini – before exploding out of the Italian’s wheel just after the 200-metre board to win by four lengths over UnitedHealthcare’s Boy Van Poppel, with Sabatini third. It was the Manxman’s third win of the race, and a fine way to sign off his year as reigning world champion.

Three seconds later Tiernan-Locke, who had been alert in responding immediately to every possible threat throughout the stage, finished safely in the main pack to defend his 18-second advantage over Nathan Haas and claim overall victory. Between himself, Cavendish, House and Williams, British riders almost locked out the day’s podium. Only the Dutchman Van Poppel, winner of the points competition, ruined the all-British party.

With cycling fever at its peak after the Tour de France, Olympics and Paralympics, British interest in cycling has never been so high. Every stage of the race was well attended despite inclement weather at times, with the crowds on Saturday’s climbs and on the final day often five or six deep. With Bradley Wiggins taking a back seat – and then an early exit – fans still had several British successes to cheer on, with Sky’s Mark Cavendish and Luke Rowe accounting for four wins and Jonathan Tiernan-Locke becoming the first British winner of the race since Robert Millar won the Kellogg’s Tour in 1989. And we should not, of course, forget Kristian House and Pete Williams, winners of the mountains and sprint competitions.

Tiernan-Locke was particularly impressive. His climbing talent was already well-known, but here he demonstrated his tactical ability. Without the aid of race radios, his judgement of when to attack, when to follow and when to sit tight was exemplary. He will surely step up to a WorldTour team next season, with Sky likely front-runners for his signature.

Finally, the parcours proved to be excellent. While there was plenty to encourage the sprinters, routine flat stages were few and far between, and most offered ample opportunities for both climbers and breakaway specialists to challenge for victory. Although perhaps too many of the earlier stages featured their key climbs too early in the day to really bare their teeth, the later ones had suitably undulating Classics-style profiles which, when combined with windy conditions, led to plenty of aggressive racing and splits in the bunch. Is the race deserving of an upgrade in status and perhaps an extension to nine or ten days, which would help smooth out one of its biggest bugbears: the high number of long-distance transfers? Maybe not yet, but with interest in the sport at an all-time high it is surely worthy of consideration.