In the longest men’s individual time trial the Worlds has ever seen (57.9km), Germany’s Tony Martin defended the rainbow jersey, but it was the fight between Fabian Cancellara and Bradley Wiggins that held the most drama, with Wiggins taking silver by 2.25 seconds.

END_OF_DOCUMENT_TOKEN_TO_BE_REPLACED

The individual time trials take place over a similar route to that of the trade team time trials. The men’s under-23 and junior girls’ events took place yesterday, the junior boys and elite women today (Tuesday) and the blue-riband men’s race wraps up proceedings on Wednesday. END_OF_DOCUMENT_TOKEN_TO_BE_REPLACED 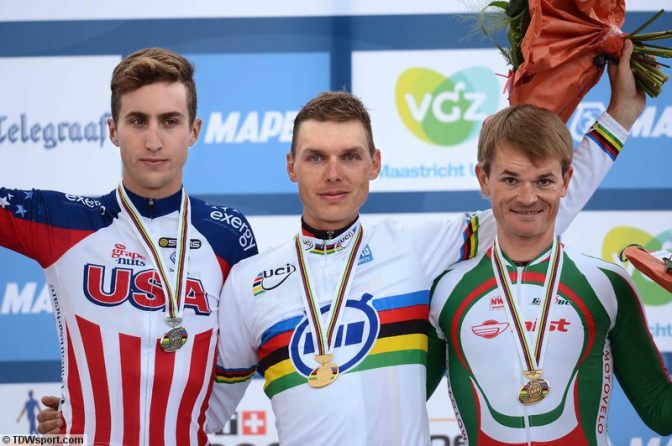 Germany’s Tony Martin rescued his season when he just managed to retain the rainbow jersey in the individual time trial, having already won one gold medal with Omega Pharma-Quick Step in the trade team time trial on Sunday. He mirrored the feat of compatriot Judith Arndt, who had triumphed the day before in the elite women’s event.

Beforehand Martin said the man he feared the most was the precociously talented young American and former under-23 world time-trial champion Taylor Phinney. He was right. Phinney finished before Martin and was only five seconds behind in the end. Maybe that slender advantage was down to Martin overtaking his two-minute man, Spain’s Alberto Contador, although Phinney also had his two-minute man in the crosshairs – Vuelta time trial winner, Fredrik Kessiakoff (Sweden).

How the race unfolded

The first rider rolled out of the start gate in Heerlen in near-perfect conditions to complete the 45.7km course with its 36 bends and three challenging climbs. But at the finish we were already experiencing the first of a couple of cloudbursts and  by the time the 15th rider had set off, the storm clouds had gathered and rain was falling, making the course precarious. The first rider to post a meaningful time, Chile’s Carlos Oyarzun, finally finished 32nd but ahead of riders of the calibre of former world champion Bert Grabsch (Germany), Jakob Fuglsang (Denmark), Rein Taaramae (Estonia) and Peter Velits (Slovakia). The wet conditions definitely adversely affected the performance of  the middle order of riders.

Oyarzun was ejected from the hot seat firstly by Austria’s Riccardo Zoidl and then by Kazakh national champion Dimitriy Gruzdev who himself was supplanted by Vasil Kiryienka (Belarus), the only rider from that middle order able to deal with the testing combination of wet and dry conditions. Kiryienka’s time was ultimately good enough for the bronze medal.

As the rain stopped and the roads started to dry out, it was apparent that the race would only be contested by the better exponents of the art of time-trialling but in the end it came down to a two-horse race between Phinney and Martin. Contador, who was expected to challenge, faded early and finished in ninth place. Sadly, Italy’s Marco Pinotti fell heavily on his left side on a left hand-turn and was forced to retire shortly thereafter.

Third from last to start, Phinney left the start gate like a rocket and was the fastest rider at the first check point while Martin, last to leave, was slower. By the second check, Martin had turned a four-second disadvantage into a 13-second advantage. Phinney had clawed time back by the third checkpoint, 38.4km into the race but significantly before the final climb. He was now only eight seconds down and even managed to take back more time on Martin before the finish.

After Phinney had completed his ride – the first rider to go under an hour –  it was an anxious wait both for him and the crowd near the finish line where German flags were fluttering and Martin’s family, plus his many supporters, were willing him to victory. Phinney didn’t lack for support either as he’d been urged on by the vociferous American co-commentator Richard Fries. The clock was ticking down as necks strained to see Martin appear in the distance thundering toward the finish line with the crowd urging him on by banging on the hoardings. He did it with only a handful of seconds to spare before collapsing to the ground, completely spent and victorious.

After the race, Martin confirmed:

I am super happy that after all the ups and downs this season, this is a super-nice finish now. I have to thank my team, my staff, my family and my girlfriend. They are always there behind me, even in the really bad times. The victory is really for them.

Look closely at the podium photograph. What do you see? Martin is quietly proud, Kiryienka is shyly delighted while Phinney is frankly pissed off. This was his second silver medal this week after having had to settle for silver in Sunday’s team time trial with BMC in a similarly close duel.

In the post-race press conference Martin confirmed that it had been a relief to retain his crown after a year filled with mechanicals, punctures and crashes. He’d been under a significant amount of pressure, it had been a very difficult ride and he complimented Phinney on his efforts.

Kiryienka said that winning a bronze medal was a dream come true after the work he’d done on both the individual and team time trial since his last race in France. He’ll be going to Sky for the next three years proud to have something to demonstrate his abilities to his new teammates.

Phinney honestly declared that he had been pissed off on the podium with his season of near misses – he also finished fourth in both the Olympic road race and time trial – although he would have settled for a silver before the race. He’d trained really hard all summer at the longer discipline learning how to endure the pain cave for more than an hour. He said this result would give him the motivation to step up a level. Next year may be an entirely different matter as the World Championships will be taking place in Florence, not far from where Phinney lives and trains. Martin has been warned.

Big congrats to Tony Martin...a deserving champion! Looking forward to more exciting battles in the future. I love this sport.