So many stories have come out of this year’s Giro, some of which we’ve covered in our stage reviews, some of which we didn’t have room for. So this A to Z has been constructed to try to redress the balance a bit. Part 1, we start with Andrey Amador, meet some parents, say a Hail Mary, and finally Make do … Part 2 to follow.

A is for Amador

His one and only day in pink : Amador signs in (©Getty Images/AFP/Luk Benies)

It was Costa Rica’s first ever maglia rosa and it came courtesy of our favourite Movistarlet, Andrey Amador. He wore it after stage 13 and relinquished it after stage 14 to Steven Kruijswijk. Pink sunnies, helmet, jersey, handlebar tape – I think the nasal strips should have been hot pink as well. Amador ended the Giro in 8th place overall.

B is for Brambilla

Etixx-QuickStep rider Gianluca Brambilla won stage 8, the sterrato stage, taking the pink jersey from Tom Dumoulin, keeping the jersey into the rest day by riding the time trial of his life. His teammate Bob Jungels was a mere second behind him in the GC.

C is for Mr & Mrs Chaves

If you ever wondered where Esteban Chaves gets his down-to-earth disposition, graciousness and generosity of spirit, look no further than his parents. For me, this is the moment of the Giro, when Mr and Mrs Chaves were the first to congratulate Vincenzo Nibali for winning the Giro, which took the maglia rosa from their son. Both their reaction and his are priceless.

D is for Dutch treats

It was an amazing opening weekend of the Giro d’Italia, hosted by the Netherlands. The crowds were massive, the weather was gorgeous, the racing was great. What more could you ask for? Oh, a Dutch rider winning the first stage and donning the maglia rosa? You got it – step right up Tom Dumoulin! They damn near top and tailed the entire race with a Dutch maglia rosa, if not for one badly placed snowbank …

E is for Etixx elan

Contrast the Etixx team performance in the Giro with the underwhelming (some may say disastrous) Classics team and you have to wonder what happened? What indeed! Etixx stormed the Giro, putting the pink jersey on the shoulders of three riders: Marcel Kittel, Gianluca Brambilla and Bob Jungels; winning four stages (Kittel x 2, Brambilla and Matteo Trentin); winning the white jersey (Jungels – who finished an amazing 6th overall) and generally mixing it up every single day. What was different? The esprit de corps of the riders – everyone riding for Kittel, Brambilla working hard in pink to ensure that Jungels would get it at the end of stage 10, Brambilla setting up Trentin’s win – they worked as a team. Something that didn’t seem apparent in the Classics.

F is for the future

G is for German sprints

The bunch sprints were dominated by German riders this year: two sprint wins by Marcel Kittel, three by Andre Greipel (making him the winningest German in Giro history) and the final (controversial) sprint won by Nikias Arndt. Should be an interesting Tour de France on the flats.

H is for Hail Mary

In American football, a Hail Mary is that long long long pass that the quarterback throws when there’s no time on the clock and he’s not even sure there’s a receiver at the end of it to catch it for the win. Well, it felt like BMC’s Darwin Atapuma was performing the cycling equivalent of a Hail Mary in the mountains. He was always in the break, always just thisclose to victory but not to be. But he showed his grit, his guts, his heart in those attacks and we love him for it (and he finished 9th overall)! Long may El Puma stalk the mountain sides …

I is for IAM not done yet!

The Giro route planners tried to give the sprinters something to stay in for during the last week with a few flat stages before the final big mountain set pieces, but one Roger Kluge ruined the sprinters parade on stage 17. It was one of those performances fuelled by pride, as it had been announced the week before that IAM will be no more at the end of this season. Kluge held off a storming peloton to make sure that beautiful IAM kit was seen one last time in the Giro.

The other hurler of the Hail Mary was Cannondale’s Joe Dombrowski. Like Atapuma, Dombro was constantly up the road (except when he was called back for domestique duties or when he made a mistake and carpet bombed the TV mics with f-bombs) and animated the front of the mountain stages in a way that put his name on everyone’s twitter feed.

K is for Krystle

We’ve seen this shoulders in Italy this month …

Nicknames … Midge and I have decided that Steven Kruijswijk‘s nickname is Krystle. As in Carrington. As in Dynasty. As in massive shoulder pads.

L is for Landa

It’s a shame that Mikel Landa couldn’t live up to the pre-Giro hype. Touted as Sky’s answer to the question of ‘can they win a Grand Tour without the word France in it’, everyone had high hopes for the maverick former Astana rider. But illness through almost all of the spring season didn’t help the Basque rider’s chances, and he climbed off his bike after losing 7min in the first 50km on Stage 10 due to intestinal problems. Team Sky really don’t seem to have much luck with this grand tour, although Rigoberto Uran‘s second place finish in the 2013 edition is nothing to sneeze at. But he did that on the back of being set free once their protected rider, Bradley Wiggins, decided to pack it in after a miserable time. Last year’s Richie Porte Campervan Campaign™ was full of controversy (wheelgate anyone?) but light on performance and he abandoned on the second rest day. The campervan was never seen again.

M is for Making do

Orica-GreenEDGE quite simply have the best YouTube channel ever. Here is just one of the many fabulous films they put out during the three weeks. It was another week in the Giro – there was an historic first maglia rosa, a lot of hair, a Giro donkey, and a little kangaroo who could. Over in California, we had pirates, cookies and Cav.  END_OF_DOCUMENT_TOKEN_TO_BE_REPLACED 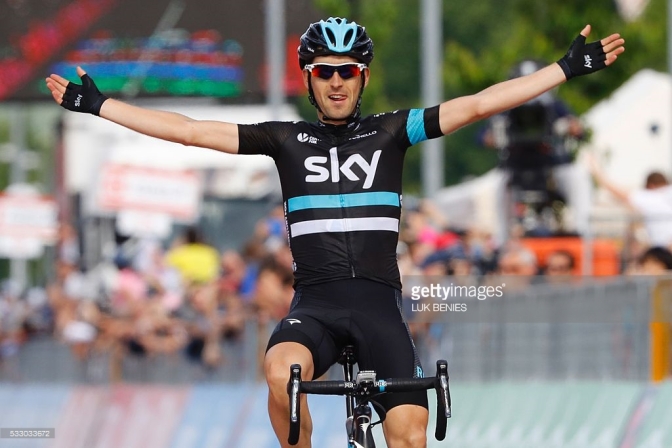 Mikel Nieve saved Team Sky’s Giro by holding off Giovani Visconti (Movistar) and an energised mob of favourites, to take a fine solo win. The elite group probed for signs of weaknesses on every type of slope. They distanced Bob Jungels (Etixx-Quick Step), but they couldn’t shake Movistar’s Andrey Amador who rode himself into the maglia rosa. Vincenzo Nibali (Astana) out-sprinted Alejandro Valverde to grab the bonus seconds for third place and move onto the GC podium.