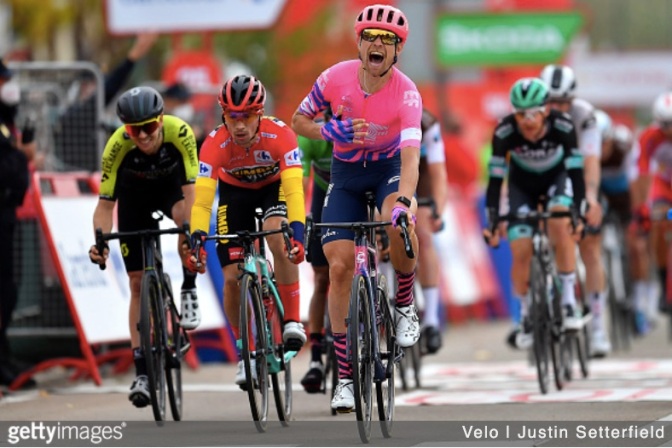 Stage 16 of Vuelta 2020 was 162km to get finished before the big final mountain stage tomorrow, that wasn’t supposed to have any surprises so the breakaway thought they had a real chance. They almost did, until Ineos decided to shred the peloton, in an effort to drop Primoz Roglic and get some precious time for Richard Carapaz. Remy Cavagna (Quickstep) fought valiantly to stay out front but he was caught with a heartbreaking two kilometres to go. Then, it was a knockdown drag-out fight of a sprint between UAE’s Rui Costa and Movistar’s Alejandro Valverde … that almost produced a winner, but Magnus Cort decided to rain on their parade, taking EF’s third Vuelta stage. So Valverde and Costa were second and third. Nope, a surprise second went to a stealth Roglic and third went to Mitchelton-Scott’s Dion Smith.

How the sprint was won

Fast and furious and full of surprises.

It was a popular win today – with both fans and riders alike.

Vuelta Stage 16: Winner Magnus Cort: “I think I timed my sprint pretty well. I came into the last corner not too far to the front. I was looking for an opening and I found it with about 200m to go, maybe a bit less. From there, I just went with everything I had"@PhotoGomezSport pic.twitter.com/tg0wOjHNQE

No rider gives me as much frustration and joy as @MagnusCort 😅

He can sit in the back of the bunch and have you screaming "Get to the front!"

And then sometimes he does this instead 🇩🇰❤️ What a win! #LaVuelta20

But what happened to Costa and Valverde?

Rui Costa was relegated to last in group, got -5 pts in points classification and received a 200 CHF fine for irregular sprint, deviation from the chosen line that obstructs and endangers another rider

Valverde was good but he did 22 sec of sprint. How ws the Rui Costa sprint different from what Démare did in the Giro? if something, Démare was more blatant

It was a stealth move by Roglic to take second, gaining another 6sec on Carapaz. And he has a sense of humour as well. What more could we want?

Primoz Roglic about himself taking 6'' bonifications: "Leader of the sprint classification should be able to sprint, right?"

Ineos wanted to make a statement and wanted to break Roglic.

The statement became a question and Roglic didn’t break.

I didn't understand much from Ineos tactics either. Carapaz didn't make any move and now he will have less helpers than Rogla and Mas in case the wind splits the peloton… #LaVuelta

Ineos falling on the sword now…..may as well go down swinging I guess.

These were Froome’s thoughts on Roglic the other day. Today makes me think Roglic didn’t get the memo.

#LaVuelta20 – 2nd place for Roglic that increases his leading of 6''

…. thanks to INEOS and Movistar work all the day#LFRLive

Roglic took 6 seconds today thanks to Ineos' bad move. It would be a shame if those 6 seconds happened to be the time between Roglic and Carapaz in Madrid 🤔

The pox is out of reach now

As long as Guillaume Martin rides across the finish line in Madrid on Sunday, the pox is his to keep. In seemingly every break, his name is well and truly known now.

Vuelta: Stage 16 & Guillaume Martin wins KoM jersey "I went for many breakaways & I’ll keep going. It’s a pleasure [to win the KOM standings]. It’s a tradition within the Cofidis team, with David Moncoutié,& Nicolas Edet. I’m very proud to have this jersey”

I’m ahead? Stop the racing! I won Roubaix! pic.twitter.com/nG7wOZy0XF