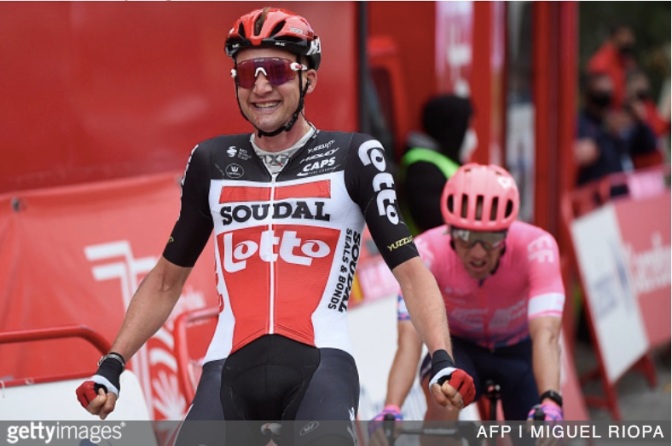 After the high drama of the Angliru and yesterday’s time trial, the Vuelta’s stage 14 turned the excitement dial down a notch. The main break of the day stayed away to content the win with Tim Wellens of Lotto-Soudal pipping Michael Woods (EF) to the line and getting his second win of this Vuelta. QuickStep’s Zdenek Stybar rounded out the podium in Ourense. All the main GC contenders rolled in together nearly four minutes behind, meaning Primoz Roglic (Jumbo) easily holds on to the race lead.

The stage might have been fairly straightforward but the final KM, with six strong riders going head-to-head, was pretty enthralling to watch.

It started with a break …

That break had a 5-minute advantage with 90 kilometres to go. There was some huffing and puffing in the peloton behind but suffice to say as they went under the flamme rouge, we had six riders in contention. It was Tim Wellens v Michael Woods v Marc Soler v Zdenek Stybar vs Dylan van Baarle (Ineos) v Thymen Arensman (Sunweb).

Wellens first hit the front with 500 metres to go but the strength of this group was obvious and they are all back together as they passed the 200 metres marker. At this point, Wellens kicks on again and only Michael Woods could grind up with him.

As it’s the Vuelta, nothing is straightforward and today’s finish line was just around a blind corner, cos Vuelta. Wellens had the inside line on that bend while Woods had to go round the long way. That difference was enough to give the Belgian his second stage win of this race.

Look how tight that last corner is!

🎙️"It wasn't easy to win. I think it was good to start the sprint first"

What went on behind?

Well, with Quickstep, Ineos, EF and Movistar all having riders in the break, they weren’t going to bring it back. And with no riders in the break to threaten the GC top ten, no one else was much minded to do the work either – except for some.

First Astana hit the front in a sea of light blue.

Think it's a classic move from old school: you have to get into breakaway, you miss it, you are punished by DS being put to relay all the day.

When that did nothing to reel in the break, Total Direct Energie decided they could succeed where Astana had failed.

You know what? They got close. They had the gap down to less than two minutes at one point. You know what else? I loved these moves. They had hope, they had optimism and they had confidence.

Primoz Roglic notched up his 596th bike change of the Vuelta. That’s a new post-war record.

Trek are determined to finish the Vuelta as they finished the Giro. That is, with not very many riders left.

#lavuelta20
Unfortunately, one of our Grand Tour rookies @AlexanderKamp1 abandoned in stage 14 due to fatigue. We may be down to 5 but we will keep on battling 100% to Madrid. pic.twitter.com/ixF8rAg7hK

The Vuelta last came to Ourense in 1995. When cycling looked a hell of a lot different!

➡️Stage finish host for the 10th time, Jalabert won the last time the race reached Ourense… and he won the GC too!#LaVuelta20 pic.twitter.com/RBWVfp9pL5

There’s snow in the forecast atop Saturday’s summit. I believe there’s something in Roglic’s background that might make him feel right at home. That’s assuming it doesn’t get so bad that the race has to go for plan B.

La Covatilla snow-free at the moment, but significant snowfall forecast for Saturday morning, the day of the Vuelta's final summit finish pic.twitter.com/MXXmjFJ0aB