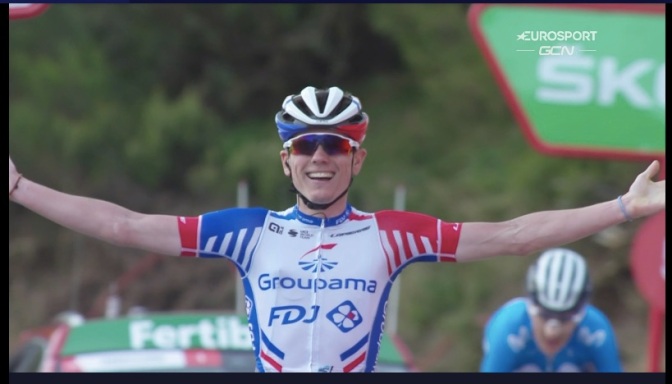 It’s the weekend and the start of a double header of pain. Today’s stage 11 of the Vuelta a Espana, in beautifully scenic Asturias, took in four Cat. 1 climbs and finished with breakmates David Gaudu (FDJ) and Marc Soler (Movistar) going mano-a-mano in the last 5km, with the former easily getting the upper hand in the final 125 metres. Gaudu soloed across the line to take his maiden Grand Tour victory while runner-up Soler catapulted up the GC standings from 10th to sixth. Another break-mate, Michael Storer (Sunweb) rounded out the podium. That aside, the top ten on general classification remained generally unchanged.

With the Angliru waiting in the wings, today was most unlikely to be a balls-to-the-walls kinda day. Instead we had a GC stalemate with the main contenders keeping their powder dry for tomorrow.

The winning break began in the valley between the Alto de la Campa and the Alto de la Colladona with Cofidis driving the peloton to enable Guillaume Martin to defend his polka-dot jersey with those four Cat. 1 climbs ahead. A quintet escaped at the summit only to be joined by two more on the descent, including young stage winner, Gaudu.

Jumbo-Visma and INEOS worked together to keep the break’s advantage under 2 minutes ahead of the third ascent of the day, Alto de la Cobertoria. At which point, Movistarlet Soler saw his chance and joined the merry band of breakaways. Martin passed the summit and collected 10 KOM points.

Onto the next climb where Martin collected 10 more KOM points while the break fell apart. Soler accelerated 5.2km from the summit and Gaudu was the only attacker able to follow.

It started the heat up on all parts of the climb

Vingegaard has done a tremendous job. Now Sepp and George have taken over with 2 km to go. Looks like the breakaway will make it for the stage win.

Amador has gone backwards now. 3.9km to go; Carapaz could be isolated, while Roglic is ensconced in the Bee Hive. #Vuelta2020

Gaudu and Soler making their own race up front.

Attacks coming from the breakaway. David Gaudu and Marc Soler have dropped their companions and have a good chance of contesting the victory at #LaVuelta20.

The two attackers work together all the way to the final hundred metres, where Gaudu makes the most of his punchy abilities (and fresher legs) to take his first Grand Tour stage victory. I’m pretty sure I heard Marc Madiot (Groupama-FDJ’s  General Manager) shouting encouragement to Gaudu, particularly during those long final 500 metres.

Gaudu looks so fresh, I think it's his big day today. The peloton lost time on them so far. #LaVuelta

Meanwhile, back down the climb …

Despite group being big, Carapaz is now isolated vs 5 Jumbo-Visma.#LFRLive

Jumbo-Visma had plenty of helping hands to control the last ascent for race leader Primoz Roglic while the other GC contenders were on their lonesome. Aleksandr Vlasov (Astana) attacked from the GC group inside the last 2km while Dan Martin (Israel Start-Up) accelerated in the final kilometre only to be followed by Enric Mas (Movistar), Richard Carapaz (INEOS) and Roglic. Result: stalemate.

There's nothing to separate the top contenders after a heavy day of climbing at #LaVuelta20.

Richie and Roglic finish alongside each other to remain locked together atop the GC.

The row about who’s in red rumbled on …

Chris Froome (INEOS) led a brief rider protest before the start of today’s stage over the confusion as to whether time splits awarded on the previous day’s stage, which saw his teammate Richard Carapaz lose the race leader’s jersey, should be for a sprint stage or a summit finish. Initially, all the front riders were given the same time, meaning Carapaz would have retained the lead. The UCI jury then decided that the mountain top rule applied and there was enough space between the finishing riders to count, thereby handing the jersey to Jumbo-Visma’s Primoz Roglic.

Controversy at #LaVuelta20 after the organisation changed the time gaps definition after the stage yesterday. Riders and teams protesting. At the start line we still don't know who is the official leader

Amazing scenes as Enric Mas starts to roll out for stage 11 of Vuelta…& Chris Froome calls him back. Start then delayed for several minutes while Froome debates how time gaps were calculated at finish yesterday with race chief Javier Guillén, (which led to Carapaz losing red). pic.twitter.com/6jObzssM7F

Overheard from someone in the peloton as the debate over who should be in red dragged on & the race still wasn’t leaving: ‘We were already going to be finishing in the dark today before this….’

see @searchhhh time line, the Vuelta sent out a notice of a change to the rulebook the day before the race started, changing yesterday's stage from 3 second rule to the normal 1 second rule

Despite the protest and confusion, the times stood and Roglic started today’s stage tied with Carapaz, and defended the red jersey going into Sunday’s key stage finishing atop the Angliru.

I don’t know which manufacturer is responsible for Cofidis’ kit but now that Guillaume Martin has 50 points in the KOM competition could you possibly spring for some matching all-blue shorts?

I am, quite simply, disturbed by that Blue Pox and Red Bibs combo. #Vuelta2020 pic.twitter.com/lQTf2gaY3Z

At last, something we all agreed upon

I just want to jump on the bandwagon and say the scenery today in @lavuelta is incredibly stunning!!

The Vuelta is so fabulously beautiful in late October. Every bit as photogenic as the Tour—if not even more so. So unlike the inferno of early September. I wish it could always be now, well after Worlds.