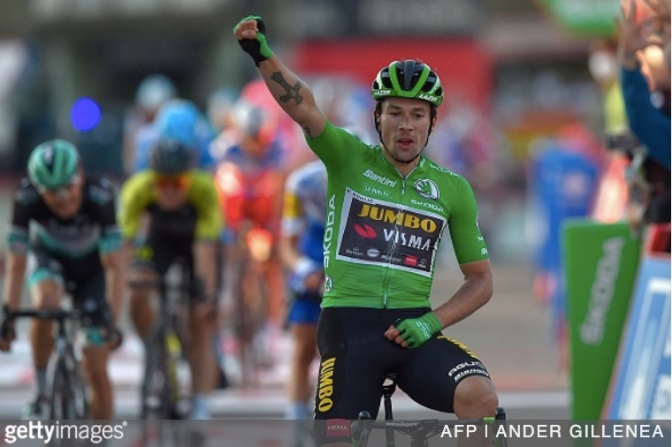 A pleasant ride in the sunshine with panoramic shots of sandy Cantabrian seashores, sweeping cliffs and verdant countryside, finished with a 2km climb. Primoz Roglic (Jumbo-Visma), scenting bonus seconds going begging, his third stage victory and quite possibly the red leader’s jersey, attacked the leading bunch to solo across the line just ahead of the other GC contenders. Felix Grossschartner (BORA) and Andrea Bagioli (QuickStep) finished respectively second and third on the stage. Crucially for Roglic, his 10 bonus seconds and three-second advantage put him on the same time as former race leader Richard Carapaz (INEOS) who, on count back, now sits in second spot. That aside, the top ten on general classification remained unchanged.

Not one for the sprinters

Conventional wisdom had this stage as one for the break, the puncheurs or maybe even the sprinters. Ahead of this weekend’s dastardly double-header, few had considered the GC contenders.

Today's finish in Suances is not straightforward for the sprinters. Some tight turns and an uphill finish. Check out the profile of the final 9kms.#lavuelta20 | @lavuelta pic.twitter.com/39zicUNojt

To be honest, it was a slow boil and I was almost tempted to copy yesterday’s stage review and just change a few of the names.

Today's Vuelta stage, so far, has been one for the purists.

Yes, it was that thrilling until the final 12km when a number of riders livened things up by launching what were ultimately unsuccessful attacks.

#LaVuelta20
Into the final 9kms and attacks are making this a thrilling finish as the peloton heads into an uphill, punchy finish for the last kilometer.

INEOS lead the much-reduced bunch screaming and streaming into the final obstacle.

This
Is
Not
A
Sprint!

The race was red-hot in the final 500 metres as KOM Guillaume Martin (Cofidis) fired off the front, stringing out the bunch but, much to the despair of the French commentary team, the Frenchman was slowly reeled in as the gradient increased, before Roglic came flying through, leaving everyone flailing in his wake. He had enough time to check behind him before lifting his arms as he crossed the line for his third stage win and took back the red jersey from Carapaz.

" – That was an incredible victory from Primoz, is there anything this guy can't do?"
" – On the bike I wouldn't say no, maybe there are others things, but on the bike he's actually quite good."#LaVuelta20 pic.twitter.com/I4o1v4GF62

Initially Roglic and Carapaz, who finished 14th, were given the same times for the stage but this was quickly corrected.

Primoz Roglic wins again. His THIRD! Takes another ten bonus seconds and gets awfully close to Carapaz in GC!

Same time for Roglic and Carapaz? You're having a laugh… What happened to the initial three-second gap? Primoz should be primo and in red tonight #LaVuelta

Roglic is in red because his sum of positions in each stage is lower than Carapaz one.#LaVuelta20

“This must be a day for the GC men”
WINNER: P. Roglic

“This could be a stage for the breakaway!”
WINNER: P. Roglic

“This is a great chance for the sprinters”
WINNER: P. Roglic#LaVuelta20 #LaVuelta2020

After his victory, the Slovenian stage winner said:

I’m super happy. It’s never easy but I had the legs and this is really really nice. I’m one year older [after turning 31 years old on Thursday] so I’m stronger. It’s like wine, the older the better. I’m back in red. It doesn’t really change things for my team. We need to keep the momentum going. We have a weekend in the mountains. It will be fun to watch and we’ll do our best.

One thought on “Vuelta a Espana 2020: Stage 10 – Roglic’s third triumph sees him take back lead”