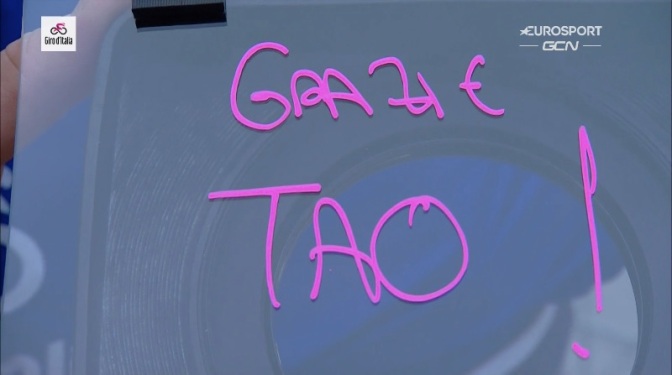 After the high drama in the high mountains this last week, it came down to a time trial to settle the maglia rosa. It should come as no surprise to anyone that the winner of the stage – by a smackdown 32sec – was Filippo Ganna (Ineos). And, as much as there were people out there who wanted a Jai Hindley win (although you wouldn’t know if you were listening to Eurosport), it was no surprise that Tao Geoghegan Hart unseated the Sunweb rider to raise the beautiful Trofeo Senza Fine. Wilco Kelderman took the third step of the podium.

Two races in one

First up, the stage win. Filippo Ganna sped through the parcours, a perfect combination of power and technique, even catching the rider who started in front of him near the finish line. His final winning margin was 32sec (on a 15km parcours!) and ended this Giro by winning all three time trial stages and a normal stage, just for good measure.

The action doesn’t stop! Get ready to watch the Last Km of today’ Stage winner, @GannaFilippo! 🚀

"@GannaFilippo has gone supersonic yet again!" 😱

What a Giro d'Italia it was for the @INEOSGrenadiers rider in his home nation! 🇮🇹pic.twitter.com/oXHVAYyCkf

Ganna looks so relaxed on the hot seat he could probably have a wee nap.

Filippo Ganna is the first rider in 25 years to win three individual time trials in a Grand Tour.

While Fabs – I mean, Ganna – was in the hot seat, it was down to the last two riders out of the start house to determine the winner after three weeks.

Some great sportsmanship between @JaiHindley and Geoghegan Hart before they settle the #Giro🇮🇹 title out on the road.👏🏻 pic.twitter.com/0GDlBCnOWT

Really hope they both do a good ride. Don't care who wins really, just hope neither loses by coming off or making a mistake. Fantastic stuff this @giroditalia

What are the bets on Jai Hindley heading out on his TT later and Rohan Dennis just riding past him to sit on the front? #Giro pic.twitter.com/cZt9LPEj5O

By the time Jai rolled in, he had lost the maglia rosa to TGH by 39sec. TGH also took the white jersey for best young rider home as well.

"During the ITT my DS told me I was faster than Hindley. When my DS told me not to take risks in the final part I understood I was close to the victory".

What a contrast of emotions in Milan. A very deserving Giro d'Italia champion in Tao Geoghegan Hart, and at the same time you can't help but feel for Jai Hindley. Incredible how these two young domestiques unexpectedly thrust themselves into the battle for the maglia rosa. #Giro

Incredible 3 weeks for Jai Hindley. He'll be massively disappointed with today, but what a race for him. Nobody predicted he'd be in this position and he's ridden like a seasoned grand tour specialist the whole way. Chapeau! #Giro103

🗣"I think when I look back, I’ll be super proud with how the team and I rode the past three weeks."

Get reaction from @JaiHindley and @W1lcokelderman after their fantastic double GC podium for us at the #Giro🇮🇹.👇🏻

How the legend gets written

Sunday’s for me will always be playing football on the marshes and going to Brick Lane market with my old man & brother. Today is just another Sunday. I haven’t seen my family in 10months, but they are always with me ⭕️. pic.twitter.com/XmkmY2n2up

Wow, he's only gone and blown the bloody #giro apart, well ridden Tao Geoghegan Hart on a quite stunning victory in Italy. And he went to school at end of our road, Hackney rejoices!!!

Ineos now have five Grand Tour winners on their roster in Froome, Thomas, Carapaz, Bernal, Geoghegan Hart. Can't imagine that has ever happened before, right? Another one for @irishpeloton 😉 #Giro

They should leave their leader at home more often, they really coloured this giro and what a fantastic result. Still feel sorry for Thomas but holy shit were they fun to watch

Before they started on their Plan B for the GC, INEOS went all in for stage wins. They got them and then went on to take the overall win as well.

RIP to the belief that a team needs a fully GC-focused roster to win a Grand Tour overall? Or is this just 2020 being 2020?#Giro

The KOM jersey went to Ruben Guerreiro from EF Cycling.

Most Combative of the Giro was Thomas De Gendt (Lotto Soudal)

Ineos took the Team Classification, much to the chagrin of Movistar, no doubt

I’ve loved the @giroditalia this year. With all the shit going on in the world right now, being able to escape into bike racing has been a salvation. Congratulations to @taogeoghegan and also to @JaiHindley for 3 weeks of inspiration 🙏