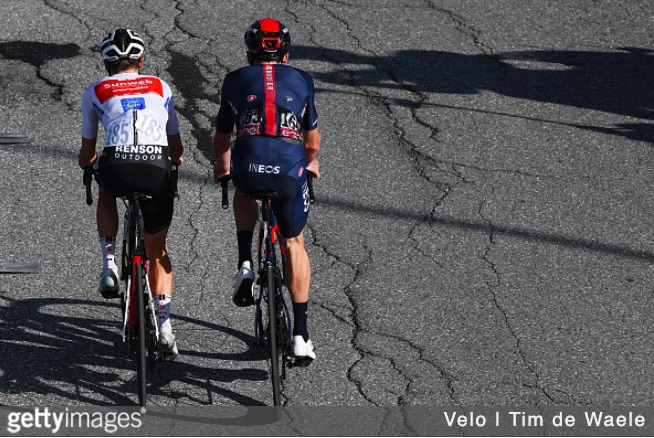 We knew it was going to be close. Three weeks of racing in the 2020 Giro d’Italia – chills and spills and thrills – and we have the maglia rosa decided on the final day. It is all up for grabs. At the end of Stage 20, it was mano a mano between Tao Geoghegan Hart from Ineos and Jai Hindley from Sunweb. Jai took some intermediate sprint seconds and TGH won the stage. And it is now a dead heat going into tomorrow’s ITT.

So what the hell happened today?

Today’s stage wasn’t as originally planned, in that France said ‘Non’ to the peloton riding up and down their mountains, so they settled on three times up Sestriere. The received wisdom from the pundits was that Wilco Kelderman would keep the maglia rosa and that Tao Geoghegan Hart and Jai Hindley would arrive at the line with the leader and it will all be decided in the time trial. That last bit was right.

No more than 15" separate the top three in both the Giro and the Vuelta today, something we'd expect on stage 5, quite a bit more thrilling on stage 20.

🎙 What the key riders have said before the race. @W1lcokelderman – @TeamSunweb

🎙 What the key riders have said before the race. @JaiHindley – @TeamSunweb

🎙 What the key riders have said before the race. @taogeoghegan – @INEOSGrenadiers

Kelderman loses the maglia rosa, it’s down to TGH and Hindley.

#Giro🇮🇹 @JaiHindley continues to follow the Ineos duo as they go inside 10km to go on the stage. @W1lcokelderman is riding valiantly to honour the pink jersey, 1'20" behind Jai's group. pic.twitter.com/rzttR7OOUO

Hindley tried but couldn’t shake Ineos off. They went to the line together

📽️The Last Km of an incredible stage. Tao vs Jai! What a show!

Highlights of the stage

#Giro d’Italia 2020 where everything can happen!
Watch now the Highlights of Stage 20!

Another instalment of Guys in Cars Yelling

Absolute PANDEMONIUM in the Grenadiers team car as @taogeoghegan got the win today – our sixth of this #Giro (📽️ @VelonCC) pic.twitter.com/DeAxpZsumw

A beautiful moment for two British teammates. @taogeoghegan and @swiftybswift after stage 20. What a team effort this fightback has been! #Giro pic.twitter.com/bzrn2Dcqda

“It’s extremely close.” Obviously, TGH has had training in the understatement department.

"This is bike racing, everything can happen".

A tiny frisson of doubt in this tweet as to if the TT will be held in Milan at all … not sure what that’s about, but this year, I wouldn’t be surprised.

Ineos riders have now won 6 stages at 2020 Giro d'Italia and that equals team's record – 6 stage wins also in 2012 Tour de France. With all probability they will collect 7th tomorrow if ITT can be held in Milano. #Giro103

The idea that Ineos might accidentally win a GT whilst going for consolation stage wins from breaks genuinely makes me laugh every time I think of it.

Obviously they've focussed on it now, but it's been a fun journey watching them do it.

"To wear the leader jersey in a GT is an incredible privilege".

Cycling🚴‍♂️ – For the first time ever 2 riders will enter the final day of a Grand Tour with the exact same time in the general classification. #Giro #Giro103

Phantom of the Stage

Rohan Dennis picked up where he left off on the Stelvio – ripping the legs off everyone but TGH and Hindley.

With Ganna, Puccio and Castro doing their turns, now it's Rohan Dennis who hits the front with 30km to go.

Just like on the Stelvio, the peloton has disintegrated #Giro 😯 pic.twitter.com/lem7XclA6D

Incredible days racing here at the @giroditalia Magnificent old school battle between Hindley & Geoghegan Hart but you have to credit Rohan Dennis with essentially carving out this late narrative, by his sheer raw strength today and on the Stelvio. #Giro

Hats off for INEOS and the way they took on this stage to set up Tao.

Hindley did what he could to gain time before the ITT but Rohan Dennis made the difference once again. The way he came back after Hindley’s first attack.. Puff… #Giro pic.twitter.com/c7Y4LVB8QI

Rohan Dennis is like some sort of stage phantom. You think he's gone, he was only hovering all along, back he comes, whooooooo 👻

What Hindley saw when he turned round to see Rohan Dennis up in his grill. #Giro2020 pic.twitter.com/Ag6fC6pIBU

Without Rohan Dennis in the race, Wilco Kelderman would have won this Giro. 100%. When I will ever think about this Giro edition, this thing will always pop in my mind. #Giro pic.twitter.com/lr02Ztdc8X

Rohan Dennis was feeling 'a little bit average' with 45km to go after over-fuelling, 'burping and bringing some stuff up'. Quite the turnaround for when it mattered. https://t.co/XYRxHkWndJ

Prediction. Rohan Dennis will be the best domestique Jai Hindley has ever had.

Let’s talk about Ineos’s budget in a bit and see if there really needs to be a whip round for beers.

I hope Jai Hindley & Tao Geoghegan Hart have put a little kitty together to buy Dennis a beer or ten. #Giro

Mavis, I think you might have let the secret out of the bag.

Wonderful, congratulations @taogeoghegan and I have to say I’m secretly in love with this guy #Rohan what a team player @INEOSGrenadiers pic.twitter.com/ShUAcOUgK7

This might just be where the budget of Ineos Grenadiers (in the zillions) puts a few extra seconds on TGH’s finishing time.

I understand Ineos Grenadiers have laid on helicopters for tonight’s transfer to the hotel. Not so Team Sunweb, who’ll have a 2.5-3 hour journey on the team bus. #giro

And I betcha dollars to donuts that they will be greeted at their hotel by a waiter with a tray of Ferrero Rocher.

Will it come down to a skinsuit?

Jai Hindley has the Maglia Rosa and Maglia Bianca,
but Tao will wear the Maglia Bianca tomorrow, so neither will be wearing team-issue skin suits. https://t.co/DDELrpSqM2

Presumably Castelli have all Tao's measurements so can make a made-to-measure one based on his Ineos kit, but Jai will end up with an off the peg one with some alterations?

Possibly the funniest tweet exchange of the day. Possibly.

Well if he was trying to put a skinsuit on while climbing the Stelvio, no wonder he got into difficulty!

Anyone got a crystal ball?

A lot of dull people with spreadsheets will now spend 24 hours trying to tell you the exact result of the TT to make themselves feel good. A reminder not one of them predicted the happenings on the TDF final TT. It’s sport, spreadsheets don’t count. Tomorrow will be 🔥

The received wisdom is that TGH will win this tomorrow. He might. But then again, let us not forget …

For the people who think that Tao has the Giro trophy in the bag. #Giro pic.twitter.com/dRB7AIIGWx

Incredible scenario at Giro d'Italia: Two 24yr old riders who arrived at race in support role battling for maglia rosa. Normally Tao Geoghegan Hart will take 1sec/km from Jai Hindley in time trial; his biggest obstacle may be the pressure of knowing it's his race to lose #Giro103

I never want to have another season like this again but man the threat of every stage being the last has delivered some proper, tactically offensive racing.

What a beautiful, beautiful ride. The tension, the stretching shadows, the sprint for the line. Truly wonderful.#Giro