Tadej Pogacar (UAE-Team Emirates) grabbed his second stage victory after a brutal finish atop the Grand Colombier on a tense stage 15 of the Tour de France. The young Slovenian held off Primoz Roglic (Jumbo Visma) with Richie Porte (Trek Segafredo) putting in a brilliant performance to claim third. Roglic remains in yellow after a dominating performance from his team. Defending champion Egan Bernal (Ineos Grenadiers) tumbles from 3rd to 13th.

The second week of Le Tour ended atop a huge -and I mean HUGE- lump of rock known as the Grand Colombier, not to be confused with the Col de la Colombiere.

Unlike it’s sound-a-like ascent, it is, in fact, part of the Jura range

Your stage profile – categorised as OUCH! The riders tackled the same mountain three times by different routes: two Cat 1 efforts (the first with insane 22% ramps near the top) before the final, HC summit assault.

Cycling fans were abuzz with excitement for the potential GC battle royale. The riders, well …

Uran at start —> "The Slovenians are strong, but so are the Colombians"

The eagle eyed among you will remember an identical stage at Tour de l’Ain this year. Where a swarm of climbing Jumbo Bees ripped the legs from the peloton and Roglic secured victory.

A slightly shorter version of today's @LeTour stage featured as the final stage of the Tour de l'Ain last month. Roglic won from Bernal by four seconds on the Grand Colombier, with Nario Quintana just behind. That gave Roglic overall victory from Bernal by 18 seconds. #TDF2020

We really should have expected what was to come today. Let’s go through it

Everyone wants to be in the breakaway

With a 100km of flat road before the climbing showdown the battle for the break was fierce and protracted. Many teams tried and failed and in the chaos of one attempt, EF Pro Cycling’s  Sergio Higuita crashed hard after a collision with Bob Jungels (Deceuninck Quickstep). News came through that he crashed a second time, quickly followed by an update that he was forced to abandon the race. It was tough to watch…

Heart breaking images of Higuita having to surrender to the pain after his two crashes today. Such a shame as he finally seemed to have found the right legs again after difficult start. One quick moment it's all over.. #TDF2020

Thankfully not the head injury many feared

To update everyone: Sergio is fine. Broken hand/or finger(s). X-rays will reveal the exact nature of injury. No head injury. Second crash was due to not being able to grab brakes properly. Very sad to see him leave like this, however, the important part is he’s ok.

I sincerely want to apologize to Sergio Higuita and @EFprocycling for my move at the beginning of the race.
It was not my intention to cause this crash but I am absolutely at fault and I hope that Sergio is okay given the circumstances.

"The ambulance ran me over from behind."

Bob Jungels was in the thick of it today at #TdF2020

We also got a resumption of the green jersey battle. Peter Sagan (BORA-hansgrohe) tried to get into the break, but Sam Bennett was VERY alert to the danger.

Sam Bennett sticking to Peter Sagan like glue on today's stage 15 at the Tour de France; the Irish rider making sure Sagan is not going in a breakaway for the intermediate sprint – excellent old-school racing, with Bennett coming out on top so far on this race #TdF2020 pic.twitter.com/mo6WruEjuV

FINALLY the right riders hit the right break, and YES Rolland made it!

Bennett beats Sagan in yet another intermediate sprint. And Morkov beats Sagan too. Again. This has to be driving Sagan crazy. #TDF2020

Jumbo-Visma very definitely had a game plan, and that did not include giving the break any breathing space at all. The yellow train kept the break to within 4:30 mins on the flatlands.

The break blew apart as the slopes of the Montee de la Selle de Fromentel began to bite. Jesus Herrada (Cofidis) Pierre Rolland and best beard in the peloton, Simon Geschke (CCC), struck out with NTT’s Michael Gogl in pursuit.

If I were on CCC, I’d swear by Geshcke’s beard regularly. Stuff like, “Great Geschke’s beard that’s good pasta!” 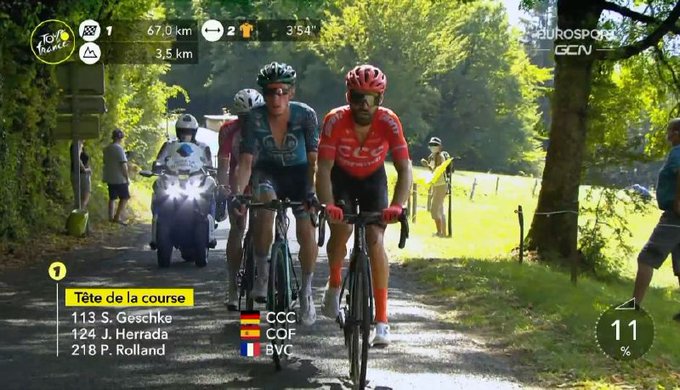 Just watching Geschke attack and thinking ‘he has a mask on!’ … just full beard and dark image 😂

The 22% ramps produced a rare sighting of the ZIG-ZAG climbing technique as demonstrated by Gogl.

Michael Gogl is zig-zagging on the incline to try and limit the effects of the slope 🥴#TdF2020 pic.twitter.com/kbgwWaLuFz

Got to hand it to the Austrian, he was tenacious in his pursuit of the three out front. Catching them just before the summit and then attacking on the descent to zoom into the lead. Back with the GC riders, the equally tenacious Jumbo Bees winnowed the group to around 40 riders, and there were already signs that Ineos Grenadiers had problems.

Jumbo still on the front with UAE (well, UAE has two people, Bees has a hive full)

Sounds like INEOS are struggling – Kwiatkowski and Sivakov possibly the only ones around Bernal at this point. Amador dropped! Carapaz dropped!

Right at the back of the action, the non climbers waved the white flag and settled in for a long day.

One of the amazing facts I learned today from Mr Millar on the ITV commentary is that the riders actually shout ‘gruppetto’. I love this.

Onto the Col de la Biche for more pain. A phalanx of yellow Jumbo-Visma lined out the GC favourites behind them, shedding the weakest as they went.

Out front, Rolland bridged up to Gogl. They made a very strong pairing who could have battled for stage victory if circumstances had been different.

This morning, Rolland said a break would need six minutes at the bottom of the final climb to make it. Looks like he shifted focus to the KOM as soon as he realized Jumbo-Visma didn't want to let them get away for good. #TDF2020

4km to the Colombier for Rolland and Gogl. #TDF2020

Jumbo are stringing the group out. Bernal and co down a bit in the string.

Goodness me, that is some face … pic.twitter.com/OGy4CEa9hK

As it was they hit the final climb with 1.30 on the yellow jersey group.

There were no fans at the side of the road for the final HC climb. To be honest, I didn’t notice as the action was TENSE in ALL CAPS. Not tense in the sense of watching all out, balls-to-the-walls attacking, but tense in that I didn’t know who the Jumbo train would drop next.

Rolland dropped Gogl early on in the climb, the Frenchman continuing solo until he was chased down by the GC group. That effort enough to earn his podium time as the Most Combative rider

“What a stage. Big battle at the start but not enough of a lead to hope for victory at the Grand Colombier.”

Gogl also deserves a round of applause

Smiles at the finish line from @MichaelGogl.

What a great ride today, spending the majority of the day in the front. 💪💪#BicyclesChangeLives pic.twitter.com/e5a30M55mB

Jumbo-Visma rode onto the Grand Colombier with five riders surrounding their leader, it only took four of them to deliver him victory. When Robert Gesink gave way to Wout Van Aert what followed was a show of strength that left me open-mouthed. For the next eight kilometres, the Belgian set a ferocious pace that put Grand Tour winners in a whole world of trouble.

Wout is at the tip of the spear which means carnage is happening at the back. #TDF2020

With 13km still to go

The pain and frustration went on over the lacets. Those sinuous bends, so pretty to watch so brutal to ride

Beautiful scenes on the #TDF2020. Unless you're Egan Bernal… #GrandColombier pic.twitter.com/uzSHwYUiPW

One minute ballooned into four, five, six and there was nothing the defending champion could do about it.

I actually feel sorry for Bernal

One of those things where you think maybe he won his first Tour too young and now he has all this on his shoulders. #TDF2020 pic.twitter.com/V3b28RCKej

Wout dropping Bernal is not the story I expected.

Before that last tweet, I asked my producer if he knew where exactly van Aert is from. With a thick, Dutch accent, he points North Eastwards and says "van Aert, he's from…another planet".

YATES ATTACKS!@AdamYates7 launches an audacious move 7km from the finish 🙌

Tom Dumoulin snuffed the Yates move out and kept the tempo fierce enough that no one else tried, it would have been tactical suicide to attempt it.

Into the last 500m and 12 riders were heading for a climbers sprint. I didn’t expect this…

Richie Porte (Trek-Segafredo) launched with 350m to go, Roglic, Pogacar and Miguel Angel Lopez (Astana) responded and these four went clear of the rest. Richie attacked AGAIN and for one spellbinding moment I thought he had it until Pogacar spun it up and sailed over the line to grab his second victory. Roglic claimed second with Porte in third.

The Slovenian got a second stage win today ahead of fellow countryman @rogla to help keep the GC race alive! 💛

The GC is turned upside down. Bernal tumbles from 3rd to 13th. Quintana down to 9th.

He fought all the way to the line. @eganbernal finishes 7'20" back on stage winner Pogacar #TDF2020 pic.twitter.com/QF2yuqzCeZ

"I wanted to give my best, not just for me, but for the team and for the respect I have for the race."

Hear @EganBernal’s assessment of a tough stage 15 which saw him battle to the line in order to limit his GC losses.

Possibility is the thing that keeps us going. Not the guarantee. Noone is a winner for life. That’s the beauty of sport. We will bouce back. So will @Eganbernal 💪🏻 #TDF2020 @INEOSGrenadiers
📷 @GettySport pic.twitter.com/7CoZIefynL

“After arriving at the Grand Colombier, Nairo Quintana is 9th in the general classification. Difficult day following his fall on Friday. Warren Barguil was with Nairo to accompany and help him, all day.”

Jumbo-Visma laid down a show of strength that was as impressive as anything Team Sky did at the height of their pomp. They rode at pace for the whole stage, and didn’t even use birthday boy Sepp Kuss in the finale. I still can’t get over the show that Wout Van Aert gave us. He made it look ridiculously easy and managed to stalk  Bernal all the way to the finish line.

Supreme trolling by Wout van Aert, riding in with Bernal.

Roglic remains in yellow and looks all set to remain there with the team performing like clockwork.

Pogacar is only 40secs in arrears, but that is a lot when the two Slovenians are so closely matched. We all know what the younger Slovenian is capable of. Is it too much to ask – especially when he will operating solo in the finales?

I suspect the most intense battle will be for the third step of the podium in Paris. Who knows, maybe Porte will hold on. He’s riding with such passion – chapeau to another performance I did not expect.

Pogacar doesn't have much of a team left, but it doesn't seem to matter as long as he can just benefit from the one of his Slovenian countryman. Roglic still in pole position though.

Hats off for Porte.

Beyond mind-blown by Van Aert. No words left. #TDF2020

Sign me up for the Slovenian duel in this final week. #tdf2020

Most Combative of the Stage: Stefan Küng (Groupama-FDJ)