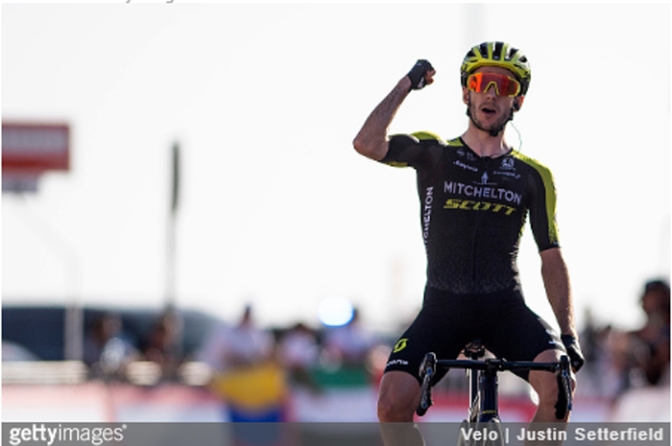 Adam Yates runs riot on the slopes of Jebel Hafeet on first day in the mountains at the UAE Tour.

Adam Yates (Mitchelton-Scott) tested his legs with 6km to go and pulled out a winning margin of over a minute in solo ride to victory. Tadej Pogacar (UAE-Team Emirates) and Alexey Lutsenko (Astana) chased hard but could not get back on terms, finishing second and third respectively. Yates now holds the race lead by a walloping 1:07mins to Pogacar.

It’s my first race of the season, so it’s difficult to know how everyone’s going. I just really wanted to test my legs and see where I am, so I attacked maybe a little too early, but in the end I felt good. – Adam Yates

"Behind me I could see that they organised themselves. I just went for it then." – @AdamYates7 🎙#UAETour 🇦🇪https://t.co/qkNLuRPSIf

Adam Yates wins the first Jebel Hafeet mountain top finish of the week, totally destroying the competition. 😲 Never seen Adam so strong on a long climb before, that was hugely impressive. 👏 Check those gaps! #UAETour2020 pic.twitter.com/5szSvQy4Qp

Uff… Can’t imagine a climbing in that climate

Jump inside the peloton and feel the tension as the riders take on the steep mountain top finish on Jebel Hafeet in @UAE_Tour.
____________#UAETour pic.twitter.com/QYMHwdql3M

Stage 3 #UAETour was a torrid affair with the temps hitting 38.ºc as the peloton tamed the mighty Jebel Hafeet climb.

Scenes from the summit 📸👇 pic.twitter.com/ZJtT0EVo17