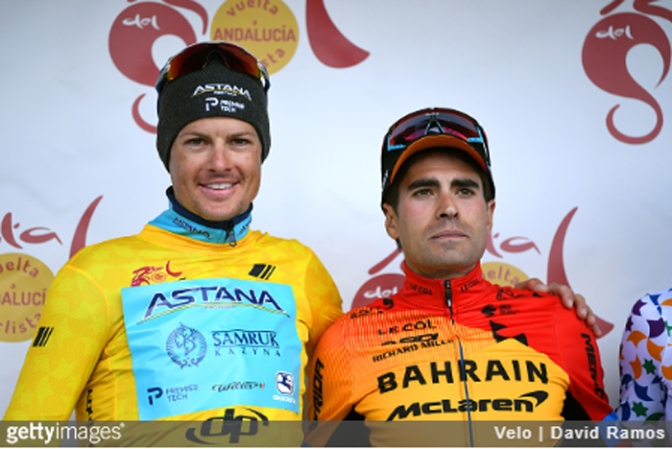 Racing from Portugal and Spain, riders with points to prove and a Beatles song.

If this stage were a song, I’d be singing in mop-top style : It was a hard day’s race and they working like a dog. Attacks aplenty all race long which tested the sprint trains mettle, but didn’t stop the fastmen having their fun at the end. In just a few powerful pedal strokes Fabio Jakobsen caught and passed Elia Viviani (Cofidis) to claim his second win of the season. Matteo (yes he’s at CCC now Midge, KEEP UP) Trentin rounded out the podium.

Will spectators please stop running across the road in front of a full bore sprint, it’s giving me conniptions.

Quicksteppers 9th victory of the year.

It takes an extremely powerful sprinter to make Vivz look like he is going backwards. Elia is always classy and I know  Cofidis will get this right and those wins will come.

No win in the opening stage of Vuelta ao Algarve because I found someone faster than me 😅 Anyway this 2nd place is a small step forward for me and @TeamCOFIDIS.

Congrats to @FabioJakobsen for the victory 👏 Photo: Russ Ellis pic.twitter.com/dOCiO2TgyQ

And he celebrated with an attack – of course.

Last minute instructions and music to get the heart racing. I am especially impressed with the effort to get those cycling shoes dazzling white.

Gather close and listen to tale of a Basque and a Dane and the day they grabbed the race by the scruff of the neck and made it their own. Mikel Landa (Bahrain-McLaren) launched a race defining attack on the Cat 1 Puerto de las Palomas and was joined by defending champion Jakob Fuglsang (Astana). The duo cooperated well on the ascent and twisty descent to build just over a minute on their frankly disbelieving rivals behind them. On a Strade Bianche-esque finishing ramp through the cobbled streets of Grazalema, Fuglsang played it tactically smart and then powered away from Landa to take stage and the first jersey. He holds 6secs on Landa and 25secs to third placed Dylan Teuns (CCC).

Check out all of the explosive action from the first stage of the Ruta del Sol – a mountainous first day in the south of Spain. Highlights on GCN Racing nowhttps://t.co/36qqmNLabG pic.twitter.com/IOlUYCbDOJ

Both riders had something to prove today.

After a largely anonymous year at Movistar in 2019 and less than a month after an accident while training, who doesn’t love to see Mikel Landa doing his thing?

That shout of triumph from the Dane after all the off season rumours swirling around.

Strong ride, Jakob we are so proud of you! #AstanaProTeam #66RdS pic.twitter.com/ZeLSbtaGjR

It’s not a bad way to start to racing calendar

1st race day of 2020 and 1st victory 🥇 Super happy to start the season in this way and to get confirmation that all the hard work over the winter pay off. Still 4 more days to go but my team mates are motivated and racing as defending champion of Vuelta a Andalucia and now also as leader of the 2020 edition is a huge motivation for me.