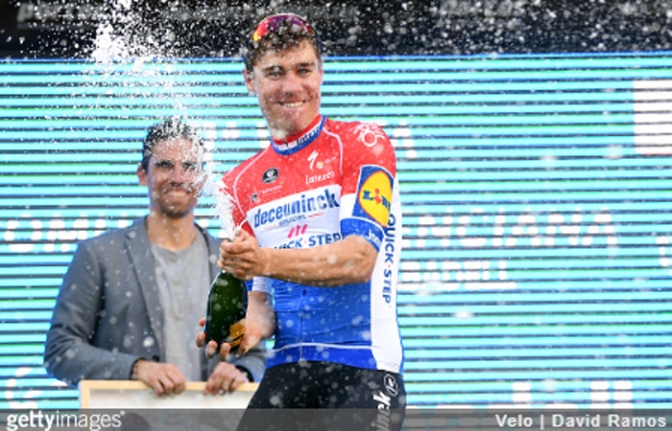 The 50th edition of Etoile finished with the traditional Ales TT  – complete with a leg-breaker of an uphill finish. Alberto Betiol (EF Pro Cycling) left everything on the road to take victory in the final time trial, beating his teammate and points jersey winner Magnus Cort by 9secs. Benoit Cosnefroy (AG2R La Mondiale) did more than enough to retain his race lead, Bettiol moved to second place with Alexys Brunel (Groupama FDJ) securing third step of the podium and the best young rider jersey. Georg Zimmerman (CCC) went home with the polkadots.

The men in pink had a successful week, here’s the news from one of their own.

First race of the season and with @efprocycling is done and dusted. What a race we had as a team. And a big thanks to all my teammates and staff for the help and a very nice week. We won 2 stages and 2 second places and a third place on a stage as well. Second in GC, winner of teams classification and the points jersey. I Finish second on the ITT yesterday behind my teammate @albertobettio , it is never a good feeling to be second but I must also be happy that I did my best ITT ever. But it is unfortunately not all good this week, there was never any Doping control at this race!!! I don’t understand how it is even allowed to have a race on this level with 7 world tour teams on the start line without doping control? I my opinion that is simply not okay @uci_cycling photo credit: Katrine Junique and photosirotti #cycling #cannondale #itishardtobeacyclist #ITT #nocontrol #notgoodenough #etoilebesseges #NoDopingControl #stepitup #rapha #poc #vision #vittoria

It's a collective performance for the team on this ITT. 3 riders are in the top 8 of the stage. #allezALM pic.twitter.com/UqUdmssetM

We were treated to a thrilling sprint finish in stage five of #VCV2020 with the @deceuninck_qst rider coming out on top 💪 pic.twitter.com/gHDWscD0XG

Third time’s the charm for Fabio…

A perfect @Lotto_Soudal teamwork today and as result the first podium of the season. Thanks guys. #dege #dgnklb pic.twitter.com/hmSWfzZI2C

Delight on the podium

🎙@TamauPogi : “This win means a lot to me, especially after all the hard work we did in the winter to prepare.”

REPORT 📰 "I am super happy to come away with second on GC, it is probably a better result than we even expected." – @jackhaig93 🎙#VCV2020 🇪🇸https://t.co/yaQhppKNjl

"It's a pleasant surprise and a nice start to the year to build on."

We've added reaction from @taogeoghegan to our #VCV2020 report.

.@ashleighcycling overjoyed with the double. 😃

🗨️ "It's great that I will be able to show the South African colours both in the time trial and on the road."