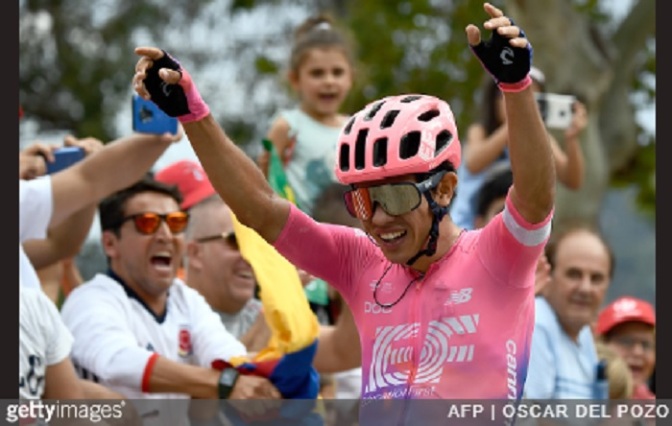 Stage 18 at La Vuelta served up a spice laden attack fest, a gutsy solo victory and a switcheroo on GC. Stage winning honours went to Sergio Higuita of EF Education First. The young Grand Tour debutant attacked out of the breakaway on the penultimate descent with FIFTY kilometres to go. Tenaciously holding his advantage over an elite chasing foursome all the way to the line. Primoz Roglic (Jumbo-Visma) outsprinted Alejandro Valverde for second on the stage to strengthen his hold on red. The rainbow clad Spaniard regained second place overall from his Movistar teammate Nairo Quintana. Miguel Angel Lopez (Astana) never stopped attacking, his fourth place on the stage enough to regain fourth on GC and the Young Rider’s jersey from Tadej Pogacar (UAE Team Emirates).

Today’s route featured two category one mountains each ridden twice. Behind the ride for stage glory, the GC battle lit up on the penultimate climb and raged all the way to the finish line.

Once again Astana blazed to the front of the GC group riding a fearsome pace on the second ascent of the Morcuera to set their leader up. This time however, their effort was not wasted as Lopez made his attack stick, pulling out and advantage and eventually bridging up to teammate Omar Fraile who had been in the breakaway. The pair rode the descent on rails and were only caught just before the final climb, subsumed into a reduced group of 21 riders all chasing one Colombian clad in pink.

Jumbo-Visma regained control with Neilson Powless and Sepp Kuss on the early part of the Morecuro climb. However, it wasn’t long before Lopez began a series of sharp probing attacks that eventually snapped the Jumbo Bee’s iron grip on proceedings.

Only Roglic, Valverde and Rafal Majka (BORA-hansgrohe) could stay with Lopez’s pace and they quickly pulled out a lead as they went over the final summit and onto the long LONG descent. With Pogacar, Quintana, Carl Fredrik Hagen (Lotto-Soudal) and Dimension Data’s Louis Mentjes chasing behind them the Lopez group had everything to ride for, eventually crossing the finish with a minute in hand. Enough to see Valverde back on the second step of the GC podium and Lopez back into the white jersey.

The award today is shared by a brace of diminutive Colombian climbers.

First up is of course the rider who took the race by the scruff of the neck and made it his own – our stage winner Sergio Higuita.

The way he held his nerve and power as the likes of Roglic, Lopez and Valverde stalked his every pedal stroke was simply impressive. It was edge of the seat time as the seconds ticked down while he time-trialled his way over agonising flat run to the finish line. A first professional victory at your maiden grand tour is a special occasion in it’s own right, but I can’t think of anyone who wasn’t thrilled for the team after the Vuelta heartache they have been through

I went full gas to the finish line, as I was pretty motivated to give my team a stage win after such a difficult La Vuelta. I didn’t have any energy left, but I had my heart set on those dreams I’ve chased for so long. I didn’t assume victory was mine until 5 kilometres to go, as my chasers were quite strong and I was afraid they would catch me. My DS kept spurring me, and insisted I could make it to the finish line. I was very emotional at the finish line because there were so many Colombian fans there. At La Vuelta 19, I’ve learnt not to give up, not even in the worse moments, and to be resilient. Every day is whole different story on which one can triumph.

He shares the podium with a rider who also never gave up. When his initial blistering attack with 60km to go didn’t work out, he simply kept right on trying until it did. Chapeau Miguel Angel Lopez

We started this stage with a goal to do it as hard as possible and to gain time on my rivals. We aimed to do a war on the road, and I think, that we succeeded. I did a good move on Morcuera, but when I was caught back, I just kept on attacking more and more. I tried again and again, don’t how, how many times I attacked, but in the end, I went away in a small group, dropping some of my rivals. I knew, I had to count on myself only, so I pushed and pushed on the first position in the group, trying to get as much time as possible.

In praise of Pogacar

He may have lost ground on GC and his white jersey, but Tadej Pogacar was never anything less than impressive today.

🗣️Pogačar: "I did everything I could to stay with the front group today. Of course I'm a little disappointed but I gave it my best, maybe it was just a bad day." pic.twitter.com/pIBQwy5gf4

Of course it’s a Movistar conundrum

The official Vuelta website is here; for full race review, go to cyclingnews.