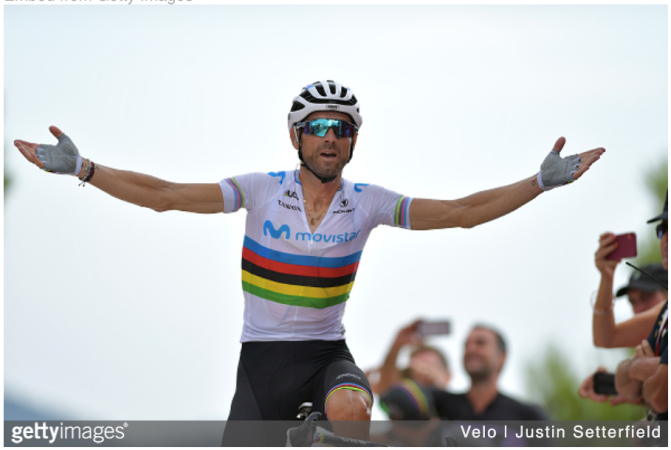 The thing that has always made the Vuelta special for me was witnessing the overall contenders sprint up unimaginably steep passes as they battled for both stage victory and the elusive leader’s jersey. Prior to today’s finish, I had been missing these types of finishes that I associate with Purito Rodriguez and my youth in this year’s race. Luckily, the Vuelta delivered today with one of their famously punchy, steep finishes that made me fall in love so many years ago.

.@PhilippeGilbert and Sergio Henao, the only survivors of the breakaway, are about to start this monster of a climb, Mas de la Costa (4.1km, 12.3% average gradient).#LaVuelta19 pic.twitter.com/80SEppbd3a

The final climb of the day — Mas de la Costa — was a measly 4.1km long, but featured ridiculously hard gradients that rarely dipped below 10 percent, and finished with a 17.5 percent ramp to the finish line. As he so often does, world champion Alejandro Valverde proved he remains the man to beat in explosive finishes. The 39-year-old outsprinted Jumbo’s Primoz Roglic, Astana’s Miguel Angel Lopez, and his Movistar teammate Nairo Quintana to take a thumping victory.

In the race for the red jersey, Lopez reclaimed the top spot after both overnight leader Dylan Teuns and second placed David de la Cruz were dropped on the penultimate climb today. With a potential sprint day for stage 8, expect Lopez to hold the jersey a bit longer for a day or two this time around.

Let’s not sugarcoat this. . . Alejandro Valverde is a suspect character. Many of us don’t like him for one reason or another, but dang it if he’s not a good cyclist! After allowing Quintana and Roglic to set the pace up the climb, Valverde made himself known at the front of the group in the final few hundred metres before launching his prominent sprint. Lopez and Quintana were quickly distanced with only Roglic able to follow, but unable to come around the wily Spaniard before the line. His history aside, the way this man can win a bicycle race is stunningly impressive, and for that he deserves to be celebrated today.

"Thanks to the whole team, because they made a huge gamble for us to try and win the stage – and thanks to @NairoQuinCo, because he really drove the pace well through the climb so I could get that victory" – @alejanvalverde #LaVuelta19 #BalaArcoíris 🌈 pic.twitter.com/AEwd2SjJma

Movistar Gets It Right… Finally!

We all love to poke fun at Movistar for their team shenanigans. Whether it’s Landa riding past Quintana without even a glance at the Tour, Valverde dropping Quintana earlier this week when the Colombian was 2nd overall, Quintana squabbling in the press about who the team is backing, or any of the other thousand examples of Movistar blemishes, it’s easy to make jokes.

However, it is important to give them credit for today’s performance as a team. Movistar controlled the race for much of the stage, riding as a cohesive unit who looked to finally have an agreed-upon plan. When Lopez, Quintana, Roglic and Valverde joined together at the front of the race in the final kilometres, it was Quintana who bore the brunt of the pace-setting while Valverde saved energy in the draft. While it may remain unclear who is the team leader, Movistar showed today that they can, on occasion, act as a team to achieve grand tour (stage) greatness.

The official Vuelta website is here; for full race review, go to cyclingnews.