The final grand tour of the season is often the spiciest! Both on the road and in the twitterstream …

What’s been goin’ on

First red went to Astana’s Miguel Angel Lopez – one of the favourites for the overall title – when his team won a crash-marred TTT.

Astana wins the opening stage of the Vuelta a Espana and Miguel Angel Lopez becomes the first Colombian in three years to lead the race.

Then the red went to Nicolas Roche thanks to some very bad tactics from Astana on stage 2. The stage was so bizarre, Nairo Quintana attacked and won on the flat!

Astana were caught off guard by series of attacks in the final 30km, with their team leader Miguel Angel Lopez losing the race lead and falling to fifth on GC. Read the full article at Vuelta a España stage 2: Nairo Qu… https://t.co/fW4rfjzyT0 via @cyclingboomer #bike #cycling pic.twitter.com/t5TiHqoBr9

This is good to see. Roche has spent most of the last decade working for others. A fitting reward. Hope he gets to keep it for a few days https://t.co/AViKPhMSgt

So far in the Vuelta, Astana have won a TTT and Quintana a stage with a flat finish and no big mountains. pic.twitter.com/Zkf9w72tDH

The Burgos kit is the best in the race but it really clashes with the KOM jersey pic.twitter.com/efKsxMBNaG

Boasting the same dream-like surrealism as Zabriskie Point in Michelangelo Antonioni's 1970 film, this photo from Saturday's opening stage of #LaVuelta19 is a strong candidate for best picture of the season.
Photo: @GettySport pic.twitter.com/Zuk5UKlO1V

From our lips to God’s ear …

Shhh don't say it too loud, but Esteban Chaves is reportedly on really good form for the Vuelta a Espana. The Mitchelton-Scott leader stays coy on rumours that he's back to his best.https://t.co/W1DnfesRPO pic.twitter.com/a1adV7ojam

Primoz Roglic might not consider himself a favourite for the win, but the JumboBees have a super strong team around him. That said, water on the TTT course caused the JumboBees to crash hard, leaving Roglic to start Stage 2 40sec behind. But the team he has around him is stong, so hopefully his Vuelta hasn’t ended before it started.

Primož Roglič: ‘I know many consider me a favourite for the Vuelta a España but I don’t know if I am’ | https://t.co/v4mqCbQvTv pic.twitter.com/nVjSCr5hFU

Astana. Jeeez, they really want to win this, don't they? Vino sent some crazy firepower to Spain. 😰 Superman Lopez will have a monster team at his side, all loyal to him. I always said that he will win the Vuelta one day and it might be this edition. #LaVuelta19 pic.twitter.com/rAUW14aJro

No excuses now, Nairo – and so far he’s delivered …

Nairo Quintana won't be grumbling about sharing leadership duties following Carapaz's late-hour exit from the Vuelta Read the full article at Open road for Quintana at the Vuelta a España on https://t.co/00mfeWjOP6. https://t.co/3y7sOhMwXM via @cyclingboomer #bike #velo pic.twitter.com/5pVx3Swsuh

Although the real prize for Movistar is the team prize

Movistar will still be hard to beat. https://t.co/v7eekFyOdE

In the Bora corner, it’s all about Sammy B.

Going away for some time……

Of course, the hardest hardman in the peloton, Thomas De Gendt, has started his third grand tour this year.

Ready for my 7th @lavuelta and my 17th grand tour in total. Another 4weeks with my roomy @Toshvds #gordoYdelgado We will do our best to take a stagewin home #ForBjorg https://t.co/B0gT4rjTtB

And only the mighty TDG would consider a gruelling grand tour ‘a holiday’!

For me every race feels like a holiday with a group of lads.

First Kenny Elissonde was on the team, hell, he was even on the little announcement film!, but then, once he landed in Spain on Thursday … two days after this tweet was posted … he was told that he wasn’t riding the Vuelta this year so adios.

It's nearly time for #LaVuelta19!

Elissonde to CN: "I travelled the whole day. I landed around 6pm to receive a call from Fran Millar saying she was so sorry but finally they changed the selection. I don’t know any reasons behind the scenes." https://t.co/9hSIRUsT6B

And no explanation given — not even to him. Shameful!

A short tidbit on CN quoting an AS interview with De la Cruz does mention the number of race days. Maybe he has a guarantee for a certain number?https://t.co/n2bFtYe14m

However, Ineos didn’t get off to a good start. Instant karma?

‘No excuses’ for Team Ineos at Vuelta a España 2019 as Tao Geoghegan Hart and Wout Poels out of GC race https://t.co/pHGX2Dp4t7 pic.twitter.com/QNeVtvkMeI

Kenny, we hope your new team in 2020 will let you ride something …

If teams were tourists!

Quickstep – the young boys on their first holiday without their parent.
Burgos – the family that are very active first thing in the day but fade and aren’t seen again for the rest of the day. 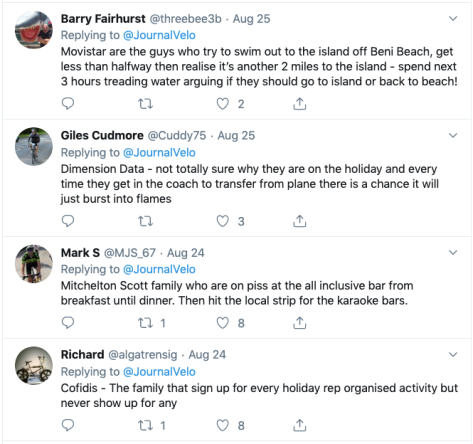 "Shadow Play" by Charles Beaumont is on @netflix, @hulu, @PrimeVideo, and DVD/Blu-ray. pic.twitter.com/FNFwMGJyag