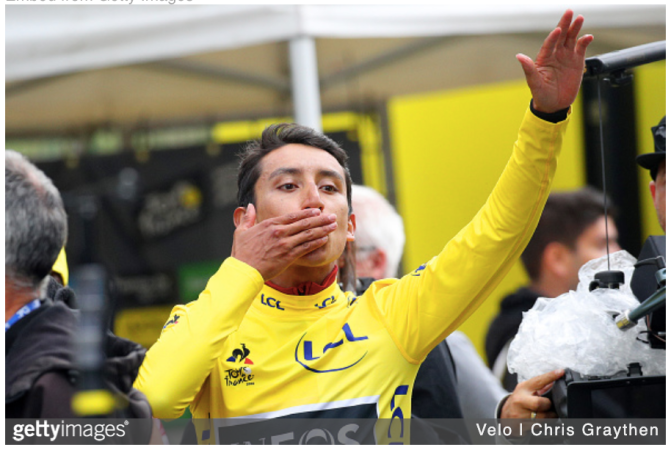 In a Tour de France that has continually surprised us, today could be considered the queen stage. It started with the dramatic abandonment of the race by French GC hopeful, Thibaut Pinot, in tearjerking circumstances. Then, just as the GC favourites crested the penultimate climb of the stage, the Col de l’Iseran, rumours of neutralisation started spreading … until it was confirmed that the stage would be stopped immediately, as a freak hailstorm had made the descent too dangerous (not least because of the landslides!). After much discussion by the race jury, it was decided that the time at the top of the d’Iseran would be the times for GC but no winner would be awarded the stage. Egan Bernal (INEOS) was awarded the yellow jersey, while Julian Alaphilippe and Geraint Thomas are in second and third respectively.

You would think that one of the most important stages of this year being suddenly stopped due to landslides, hail and snowstorms would be the most dramatic thing to happen today but it wasn’t. And you would think that on a stage where there was no stage winner, it would be difficult to find the Rider of the Race, but it wasn’t. I’d decided that well before the start of the Col de l’Iseran.

Heartbreaking. 💔 Thibaut Pinot abandons the Tour de France in tears with just two days to go. I so hope that he will come back one day and win it. COURAGE @ThibautPinot ! #TDF2019 pic.twitter.com/vKSIANGFPK

These are not the tears we want to see from riders. And as we watched Thibaut Pinot struggle and struggle before finally calling it a day, the tears weren’t only in Pinot’s eyes. It seemed that everyone watching, everyone commentating and everyone tweeting felt a huge sadness that Pinot’s biggest chance to win the Tour de France ended so painfully, just 40km into the stage. Suffering from a muscle tear in his right thigh, which occurred on stage 17, there was no way for him to continue.

Throughout this Tour, Pinot seemed to use the energy generated around Julian Alaphilippe‘s stint in yellow to ignite his own ambitions, animating the race with his instinctive stomping style and taking a beautiful, misty stage win at the top of the Tourmalet and attacking again the next day to take time out of his rivals. He rode with heart, he rode with passion, he rode with panache.

Thibaut Pinot is one of the primary reasons why this Tour has been the best for 30 years or even more. He's had lots of setbacks and has always bounced back stronger. Let's hope he will again #TDF2019

Luckily, Thibaut will be welcomed home to heal up.

Spare a thought for two donkeys in the sleepy French village of Haute-Saone:

And we can always dream of what could have been … We love you, Thibaut!

Narrator: And then Will woke up from his terrible dream of landslides in Val-d'Isère; just in time to watch his hero, Thibaut Pinot, win the stage in Tignes, take the yellow jersey and hug his pet goat on the finish line… #TDF2019🇫🇷 pic.twitter.com/TPDwr4IsUO

No winner, but there is a leader …

"There are no winners, only a leader." that's some dark, existential stuff there. https://t.co/A8NOMGt8Wb

The GC battle really kicked off on the Col de l’Iseran, as expected as the riders behind Alaphilippe in the GC needed to put him to the sword on the highest climb in this year’s Tour. With Dylan van Baarle and Wout Poels winnowing out the group on the front, the Frenchman was put under immense pressure that, ultimately, made him crack. Egan Bernal took his chance early, attacking in the final handful of kilometres of the climb. The Colombian’s power and speed up the climb was impressive, and by the time he crested, he was a minute ahead of teammate Geraint Thomas, JumboBee Steven Kruijswijk and Bora’s Emanuel Buchmann. The yellow jersey? He was trying to limit his losses with hopes for the descent and crested the climb 2min down from Bernal.

But not only hail.

The real reason of ‘There is no road anymore’ #TDF2019 pic.twitter.com/FPM2HRZfQC

Guy in the excavator is having the day of his life. +10 million people watching him doing his job.#TDF2019 pic.twitter.com/gvB2BNmBFt

Whether or not Alaphilippe could have made the time back on the descent and held onto the yellow jersey on the final climb is neither here nor there – that he wasn’t able to hold or lose the jersey on his own performance at the end is a shame. But although his time in yellow ended in confusion and tears on the car ride to the hotel, the thrills, the panache, the instinctive racing, the teeth-gritted climbing and the effortless descending he gave to this Tour is something that will be remembered for years to come.

Alaphilippe still having fun at the finish despite the chaos and losing yellow (📸 Bettini) #TDF2019 pic.twitter.com/n2m46cO05o

That we will never know what might have happened on that final climb into Tignes is also neither here nor there when we speak of the new GC leader. Egan Bernal has the legs, has the heart and – hopefully – will have the cool to take the jersey to Paris. Whether it was team tactics to give Thomas a chance to win his second Tour or Ineos just keeping their powder dry while LouLou and Pinot swashbuckled their way through the stages, we had to wait quite some time before the Colombian took the race by the scruff of the neck. But when he did, he climbed like a dream. We might not have liked Pinot’s tears, but we certainly loved Bernal’s. When riders show so openly just how much the maillot jaune means … you can’t help but love them.

‘It’s incredible. When I had the jersey and the lion, I wanted to cry. Tomorrow, I will do my best, but it still hasn’t sunk in yet.’

We absolutely love this 👏👏👏@Eganbernal shows exactly how much it means to wear the yellow jersey of @LeTour #TDF2019 pic.twitter.com/SI8BtQEeoc

Bernal may be ahead in the electoral college but I think Alaphilippe won the popular vote.

What’s up for tomorrow, LouLou?

Alaphilippe, asked if he can take the yellow jersey back after losing it before the stage was stopped: “I don’t think so, no. It was already a dream to wear it. I wore it for longer than I ever imagined.”

Congratulations to @eganbernal on the Yellow jersey, but I feel bad for @alafpolak1 losing the jersey this way. #JulianAlaphilippe #TDF19 https://t.co/bxEw5kjYNU