Nearly seven hours of racing came down to a sprint between some of the world’s best riders in the 2019 edition of Milan-SanRemo. Deceuninck-QuickStep’s Julian Alaphilippe continued the Belgian team’s one-day domination but it was anything but easy for the Frenchman.

I love Milan-SanRemo: I love the fact that any rider, from a Grand Tour contender to a sprinter and all those in between, can win it. I love the way it’s constructed so that after hours of racing, it all comes down to just a few minutes of decisive action. I also love Italian real estate and coastline, which is just as well as those few minutes are often prefaced with 250km of not a lot going on.

Perfect picture-postcard weather today on the Ligurian coast. The gap of the 10 leaders is down to four minutes now as we approach the Tre Capi climbs after five hours in the saddle. The race should start hotting up soon #MilanoSanremo pic.twitter.com/FYj6gJbo7k

As for the race, yes, there was a break. Yes, a couple of riders went off the front for a while. With 50km to go, the peloton’s heart rate monitors started doing their first meaningful work of the day. The race came to life as the riders stepped up the pace as they began fighting for position as they went over the Capi. The heart rates continued to go up as the peloton hit the Cipressa, but it was at the foot of the Poggio where the break was caught and all the riders were back together, as if the previous 290kms didn’t count. But every single picturesque metre had been sapping the legs and it would be the riders who were best protected who would battle it out at the finish.

And what a finish it was

Deceuninck-QuickStep drove the pace on the final part of the Poggio, where the race favourite Alaphilippe tried to go clear but Sky’s Michal Kwiatkowski (who pipped him at the line in 2017) reeled in the Frenchman whilst dragging a few others along for the ride.

At the foot of the Poggio, with just 2kms to the finish line, a mouthwatering array of talent had gathered – all together and all in with a chance. Check the names out: we had Alaphilippe, Kwiatkowski, Oliver Naesen (AG2R), Matteo Trentin (Mitchelton-Scott), Simon Clarke (EF-All the Words), Matej Mohoric (Bahrain), Wout Van Aert (Jumbo)… oh and Peter Sagan (Bora), Vincenzo Nibali (Bahrain) and Alejandro Valverde (Movistar) too.

With a dozen different scenarios of how the Monument could be won, the cream had truly risen to the top and was shaping up for an elite sprint. I’ll let Julian Alaphilippe finish the narrative: “With 600 metres to go, when Mohorič went to attack, I said ‘it’s now or never’. I saw my teammates after the finish and everybody was crying.” Oliver Naesen and Michal Kwiatkowski came in second and third respectively.

Rider(s) of the Race

While Julian Alaphilippe has to take the accolade, he was only one-seventh of the story and although Deceuninck–QuickStep have lost a lot of my respect this season, there’s no denying that this was a true team win.

The Belgian outfit kept calm early on. They didn’t feel the need to do any more than keep themselves protected. Once they hit to Poggio, they imposed themselves on the race and blew it to bits. Zdenek Stybar and Philippe Gilbert laid down a furious pace that not only gave cycling’s d’Artagnan his springboard to victory but also shelled out anyone who had the slightest tiredness in their legs – including Dylan Groenewegen.

Ironically, one casualty was QuickStep’s own sprinter Elia Viviani, who was unable to keep up the pace set by his teammates. Viviani must have woken up this morning thinking he could be finishing the day a Milan-SanRemo victor, but if he was finished the race disappointed, it didn’t show. It does seem that, for QuickStep, it really is one for all and all for one.

Alaphilippe paid tribute to his squad:

“It’s difficult to realise what I did and what my team did today. They protect me all day… We make the race harder and I have to do with no mistake… The last 2 kilometres I want to win – no second place anymore.”

Move of the race

Niccolo Bonifazio’s attack on the descent of the Cipressa showed the skills of the Direct Energie rider – and coupled with the position of the camera, it looked more like a Hollywood stunt than a bike racing move!

Warning: not for the faint-hearted or those who get motion sickness …

Been riding road bikes for 25 years, as long as Bonifazio has been alive, and I’ve never, ever leaned into a turn on a descent like that#MilanoSanremo 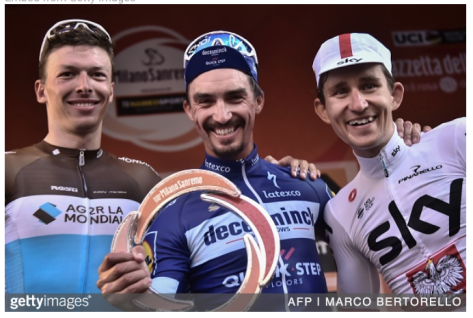 This tweet hasn’t aged well. Wonder which idiot wrote it?

Loads of people picking Alaphillppe for MSR. I don’t feel it. No idea why, he has the form and the pedigree. I just can’t see it.

For full review of the race, go to cyclingnews