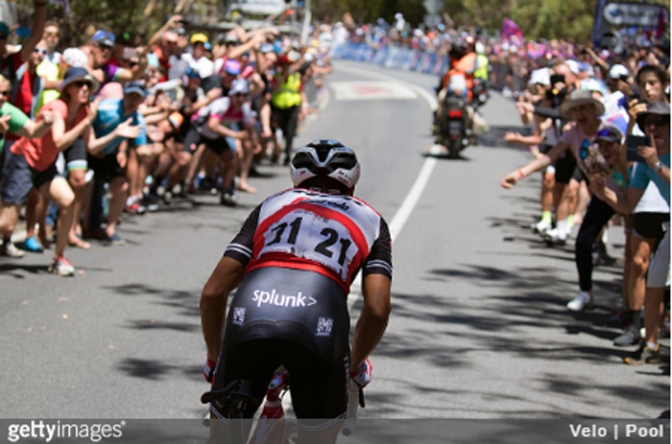 A special day at the Tour Down Under. Richie Porte makes it six Willunga Hill victories on the trot. Daryl Impey becomes the first rider to claim the ochre jersey back to back, and the cycling world says goodbye to one of their very best.

With a fierce headwind, victory on Willunga was going to be a matter of timing your effort. Team Sky definitely came with a plan with Kenny Elissonde and Wout Poels attacking on both ascents. Poels looked to be in control on the final climb,  right up until Richie Porte (Trek-Segafredo) sliced through the field with 1.3km to go. Poels held his wheel but when Porte attacked again at the 600m to go mark, nothing could stop the King of Willunga taking his sixth consecutive crown .

Going into the final stage Mitchelton-Scott’s Daryl Impey was only seven seconds behind the race leader Patrick Bevin (CCC). The injured Bevin was distanced as soon as the road kicked up and Impey played it cool as cucumber when Porte and Poels attacked. Pacing it perfectly to power back to them as the gradient lessened to cross the line in third place. The first rider to make a first successful defence of the ochre jersey.

Confirmation of the final race standings, and the winner of the 🔶@santosltd Ochre Jersey!! #TourDownUnder pic.twitter.com/1oqGGIcQwl

A massive congratulations to Jason Lea, he held the Subaru King of the Mountain jersey for all six stages of the @tourdownunder 👑 What a mammoth effort! pic.twitter.com/T67IZB3ql5

I tell you what, the last 300 meters were probably the longest 300 meters, it really hurt. But it was a sweet victory. Richie Porte (team report)

Happy to finish @TrekSegafredo boys hard work off with a win. Incredible atmosphere on #willunga. What a team, excited for 2019! @TrekBikes 📷 @McbeardBeardy pic.twitter.com/0Ua8sXw5Kb

That’s special to go back to back. I never dreamed to come here and win twice in a row. Last year I was a lot more ecstatic because I felt like I made a big step. I feel like I am maturing more as a rider, and that’s so exciting. Daryl Impey (team report)

REPORT: “That’s special to go back-to-back. I never dreamed to come here and win twice in a row. Every year we come here with strong ambitions. I took the pressure but having the faith of the team goes a long way." – @darylimpey #TourDownUnderhttps://t.co/UC5nhE4JmU

It was such a shame we did not see CCC’s Patrick Bevin able to ride the finale at full strength. He’s been full of attack and consistently strong all week, it would have been a treat to see him tussle with Impey.

I’ve had a great time here – an absolute blast coming here, racing from ‘kilometre 0’, and I plan on sticking to that all year. I’m going to go out and scrap for everything all year, and this race really only sets a precedent for what’s ahead. Patrick Bevin (Cycling News)

#tourdownunder Huge cheers from the crowd as @PaddyBevin crossed the line. He gave it everything but that crash was too much. Paddy still takes home the sprint jersey so you’ll see him on the podium soon.

Porte won the stage and Impey is the race winner. pic.twitter.com/peKRs3679Z

You don’t get to choose, but I couldn’t think of a better way to go out (Cycling News)

Mitchelton Scott’s Mathew Hayman rode his last stage the way he’s ridden all of his career – laying it all down for his team in true professional style. He was dropped on the first ascent of Willunga but fought hard to come back and position his leader perfectly for the second.

My whole family was on the hill, I didn’t know they were going to be out there, and that was really special. They are all quite emotional, but very special to have everyone come to see your last day of work. Mathew Hayman (team report)

We’re sure there will be pages written about this popular, unassuming rider and we know we’re going to miss him when the cobble season rolls around this year.

The dust will settle over the next few days, but #ThanksHayman for so many years of memories, heart and inspiration. We’re lucky to keep you in the family. pic.twitter.com/NxOZkKKmvo

#TourDownUnder: As @Mathew_Hayman hangs up the wheels, it's clear to see the impact he has had on the bunch.
Before we get to the business end of today, see what teammates past & present had to say & send a message to Mat yourself using #ThanksHayman. https://t.co/ukyfRL6whX