We had 11 categories, two weeks (or thereabouts) of voting and these are the results of the Veloshirians …

With 36% of the vote Toms Skujins victory on Stage 3 of the Amgen Tour of California took the title, beating Milan San Remo and Strade Bianche who each polled 23%. The Hatta Damn at the Dubai Tour and stage 6 of Tirreno Adriatico placed equal third at 9%

WHAT A FINISH🚴🏼‍♂️💨@Tomashuuns closing out the race in Stage 3 presented by @Lexus pic.twitter.com/OdhuZXPSVq

We had an absolute runaway victory with 78% of the votes going to that incredible finish at La Course. Stage 6 of the Giro Rosa and Trofeo Alfredo Binda were the closest rivals at 9% apiece. 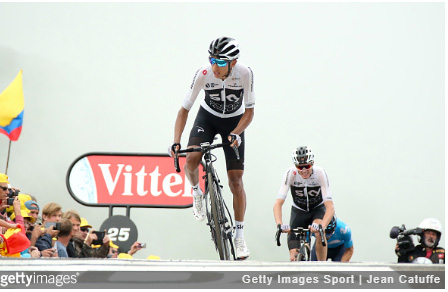 This was one of the closer categories. We had a three-way tie for second place with Pascal Ackermann, Sepp Kuss and Enric Mas, each polling 21%. But with 26% of the vote, the rider on the top step was Egan Bernal – a place we’re sure we’ll see him grace through the 2019 season. Fabulous to see write in votes for Remco Evenepol and Lucy Kennedy.

Inspiring Story of the Year

Many of you tweeted to tell us this was such a hard category to choose just one nomination. In truth, all of these stories were beautiful but with 29% of the vote the winner was Lawson Craddock’s ride at this year’s Tour de France. Just one vote behind at 27% came Molly Weaver’s story with Stig Broeckx‘s remarkable rehabilitation journey in third at 20%. There was one write-in vote for Philippe Gilbert‘s determination to finish stage 16 of the Tour de France, despite his heart-stopping crash and and awful knee injury.

Surprise of the Year

Mads Pedersen‘s grit and determination took him to second at Ronde van Vlaanderen and first in our poll with 33% of the vote. The Dane beat Romain Bardet‘s eclectic season into second (28%) with Chris Froome‘s exploits on Stage 19 of the Giro (17%) securing third, just in front of Elia Viviani and Greg Van Avermaet. We had one write-in vote for Silvan Dillier‘s remarkable Paris Roubaix.

For outstanding selfless help in the mountains, Jack Haig won this category with 37% of the vote – almost twice that of the entire Groupama-FDJ Giro squad at 19%. The votes were spread pretty much evenly between the remaining three nominees with Fabio Sabatini at 16% and a tie between Michael Morkov and Trixi Worrack on 12%. Daniel Oss and Marcus Burghardt received write-in votes.

Spine Tingling Moment of the Year

We had some thrilling moments nominated but the top tingle for most of our voters (37%) was John Degenkolb’s emotional victory on stage 9 of the Tour de France. The emotional post-La Course interview from Cecilie Uttrup Ludwig was second at 21% just pipping the Michael Woods’ La Vuelta victory on 19%. Simon Yates, Alejandro Valverde and Chris Juul Jensen were all close for 4th with a write-in vote for Chris Froome on Stage 19 of the Giro.

What a ride. What a man.

An emotional @johndegenkolb dedicates his victory to one of his best friends #TDF2018 pic.twitter.com/zhEDhCTUV3

Female Rider of the Year

This coveted title went to Annemiek van Vleuten by a landslide. The Dutch rider’s incredible season polled her 50% of the votes, more than double that of Anna van der Breggan in second place on 19%. Marianne Vos, Amanda Spratt, Ashleigh Moolman-Pasio and Coryn Rivera fought for the scraps. We had two write-in votes for Austria’s World Road Race Junior Champion  Laura Stigger and one apiece for Kristina Vogel and Cecilie Uttrup Ludwig.

Male Rider of The Year

We love him and so do you! Podiums a-go-go, panache and sheer joie de vivre gained Julian Alaphilippe 40% of your votes. Simon Yates was second with 26% with Michael Valgren, Elia Viviani and Primoz Roglic all around the 10% mark. Two voters nominated Peter Sagan with one each for Alejandro Valverde and Tom Dumoulin.

The category that came with a controversy warning! The Little Prince Damiano Cunego and Australian stalwart Simon Gerrans gained 12% and 14% respectively. Twenty percent of the voters were swayed towards Lance Armstrong to take him to third place. Megan Guarnier who announced her retirement and then a reversal in short order was second (24%). However, it was Sylvain Chavanel, un coueur de panache who claimed the title with 30% of the votes. BRAVO MONSIEUR!

You can catch our Awards Night Podcast here