The long parcours made for a brutal women’s race. It really did come down to one imperious display, two 40 kilometre rides of distinction and a rainbow podium of three fantastic solo efforts.

Anna van Der Breggan put any lingering disappointment from her silver medal performance at the TT with an utterly dominant display to take her first road race rainbow jersey. The Dutch rider bridged to the break after countering teammate Annemiek van Vleuten‘s attack. Then proceeded to power away solo for 40km – yes, you read that right – to add a worlds gold to her Olympic one.

Behind her Australia’s Amanda Spratt, who tried to go with van der Breggan at first, suffered on the brutal last climb but rode her own pace to take an emotional and well deserved silver.

With those two riders out front and looking safe for first and second, the battle for bronze was between six riders. Tatiana Guderzo grabbed her chance on the climb and rode away to add a bronze to the gold and silver already held by the veteran Italian.

Phenomenal win by Anna van der Breggen, but a magnificent ride by Australia’s Amanda Spratt as well. Both women time trialled solo for the last 40km for their respective medals. Guderzo with her first podium finish of the year for that bronze.

“This was a big goal for me and it wasn't a secret, so there was a lot coming at me. I didn't expect to win like this." – @AnnavdBreggen

Hear from YOUR NEW WORLD CHAMPION! 🌈

The last time trial Anna van der Breggen did here in Innsbruck gave her a silver medal. It was 10 km shorter than the one she just started on now. Judging from the way she dropped Spratt, the rest won't see her again before the podium… #InnsbruckTirol2018

FLAMME ROUGE for Anna van der Breggen. I think I would be vomiting with excitement by this point. She is smiling! #InnsbruckTirol2018 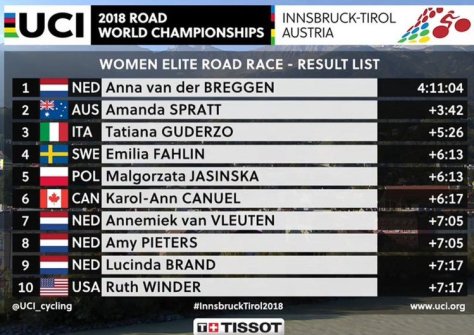 REPORT: “I’m definitely happy with the silver medal. I can be very proud of this. I’m glad to deliver a medal for the team. They’ve been supporting me, backing me since when the team was selected.” – @AmandaSpratt #InnsbruckTirol2018 https://t.co/ZewcndBs7L

This is some ride by Tatiana Guderzo. World champion back in ‘09, 2nd at worlds in ‘04 but only one top 10 individual finish this year. Currently riding for bronze.

I just love this quote from her post race interview

This bronze medal is as special and shimmers just as bright my Mendrisio gold medal. I didn’t expect this. I hoped and believed that the Italian team could ride well a get a medal but I honestly didn’t think I’d be the one to do it.

This is why the World Championships are so special and unlike anything else.

I don’t think yesterday has really sunk in. 4th in the World Championship!!! I truly didn’t believe that was ever gonna be possible!! Man, I had to dig deep so many times but sometimes it pays off!!!Innsbruck put on a true party ✨🔥🙌🇸🇪 pic.twitter.com/M7Js6gSfoW

Remco Evenepoel: "I'll try to dominate my race so i won't see anyone winning with my gap"