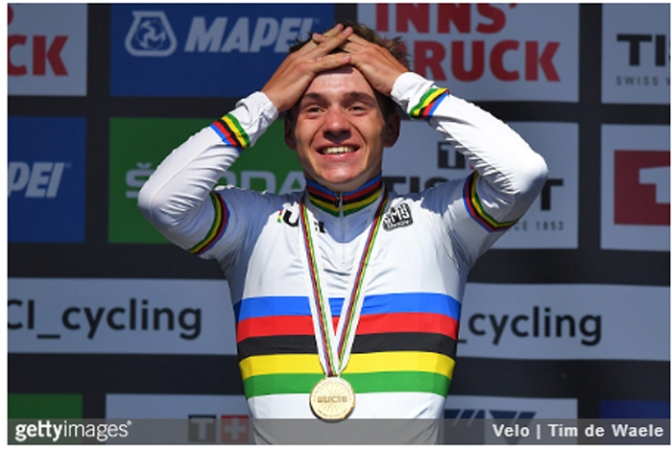 Day five and the juniors took the World Championships by the scruff of the neck and made them their own. Austria celebrated a home win and the Belgian prodigy struck again. WHAT – A – DAY – OF – RACING!!

If you get fed up with the formulaic, controlled racing we sometimes see at elite level, then you’ll LOVE this pair of races. Junior racing is best described as fearless, balls to the wall and full gas. – buckle up and enjoy the ride people. I’ve added the video below from FloBikes as it gives more flavour of the excitement. If you want more, the UCI YouTube channel has both races in their entirety.

Laura Stigger swept the rainbow jersey in a four up sprint in front of her home crowd – it really doesn’t get any better than that. The Austrian initiated the winning move with a vicious attack on the Igls climb, and then kept her cool in the sprint to take victory from Marie Le Net  (France) and Canada’s Simone Boilard.

New Junior Women’s road race champion Laura Stigger the first home winner of these champs. The Austrian is already junior world and European mountain bike champion, and turned 18 just 2 days ago. I think I was still getting over my first hangover at this stage after my 18th.

Marie Le Net fought her way onto the Stigger group after the Igls attack, held fast when they tried to shake her and used all her track skill (she’s a Madison champion) to launch her own bid for rainbows. Chapeau

Top ten in the time trial and a medal in the road race… goals achieved for Simone Boilard.

I’m almost at a loss to describe the junior men’s race. Every superlative I used about Belgium’s Remco Evenepoel time trial in the day three report:  take them as read – with bells on!  I’ve tried to add gifs of the action, because it wasn’t so much what Evenepoel did, but the manner of his doing.

The race was shaped by a huge crash as the peloton raced into the base of the Gnadenwald climb with 70km to go.

As a select group forged ahead, the overwhelming race favourite was seen still waiting for service, he must have lost around two minutes on the front group before he got going again. Did he panic? No. He proceeded to beast his way up the climb, picking off riders with ease, it was jaw dropping to watch. He made contact on the descent, but by that time two riders had flown the coop.

Hauling a train of anyone who could manage to stay on his wheel and keeping the pair out front within a minute, he then proceeded to attack. Each time forcing a smaller and smaller selection until only Marius Mayrhofer (Germany) remained.

With 19km to go, he dropped the German and just time trialled his way to claim an imperious double. His ride to the line and bike held aloft finish was joyous celebration – and I won’t stand for anyone saying it was over the top. If you can’t showboat after that sort of ride, when can you?

The German held on to take a well deserved silver, crossing the line at +1:25mins with the Italian Alessandro Fancellu outsprinting Alexandre Balmer (Switzerland) for bronze.

With all the headlines going to Evenepoel, I thought Mayrhofer produced the best he could on the day. Delighted he held on to take silver.

Simply at a loss for words at the moment, I am just so happy! It was a difficult race today but still managed to win. Huge thanks to my teammates and to every single fan for the incredible support! TT and road race world champion! 🥇🇧🇪 #InnsbruckTirol2018 #REV1703 pic.twitter.com/Ws23wvAHqV

Remco Evenepoel since picking up cycling 18 months ago: 35 victories in 45 races.

Just as I mistakenly marked his name for Tour of Flanders…

Evenepoel: "I am so far from the perfection. Champions are the ones like Merckx and Contador that won a lot in the Elites. I am not the new Merckx, I am the new Evenepoel. But my target is to win all the three Grand Tours" (Gazzetta)

At this rate, Eddy Merckx will wish he was the new Remco Evenepoel.

What else could be our #PicOfTheDay here in Austria? 😁
©bettiniphoto pic.twitter.com/r4BhiODWh2