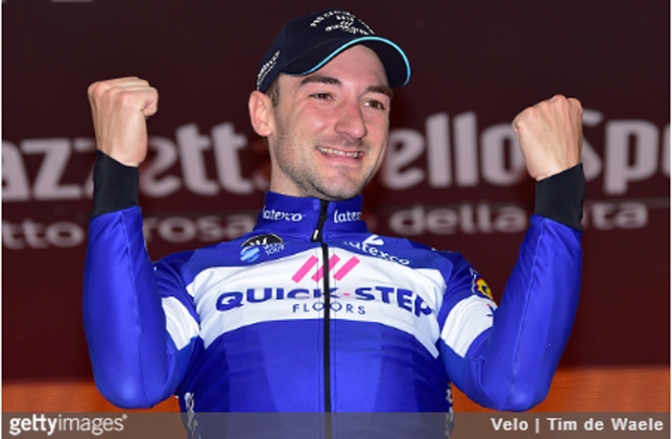 Quick-Step Floors played it cool to deliver Elia Viviani his fourth victory after a day of frantic action. With the maglia ciclamino still in play and never quite the right combination of riders in the break, BORA-hansgrohe and Mitchelton-Scott chased every attack and kept any move on a tight leash. Sam Bennett was boxed in on the run to the line, his late kick only enough for second place. Niccolo Bonifazio rounded out the podium. The GC contenders finished together, just pleased to have survived a day of full-gas action.

Stage seventeen started out crazy and just carried right on for the whole 155 kilometres. Tunnels, a big climb at the start, twisting roads, more climbs – left, right, up, down – all day long. When that was behind them, the riders faced road furniture and paint on wet roads slicker than a slick thing from slick town. All this and at a furious speed – best described as OUCH – which turned out to be an average of 46.50 km/h. There was some talk that today might be the day the break made it and many riders tried – over and over again. It was a race in flux for most of the 3 hours and 20 mins it took to reach Iseo. Yes the sprinters had their day in the end, but my rider of the race award goes to the break. To one man who was agressive from the first climb to the final 10km.

The end of the stage suggests a sprint, unless a strong breakaway makes the most of the uphill start and couple of lumps along the way. Looks like a day for Luis Leon Sanchez #Giro101 #HomeOfCycling

Astana’s Luis Leon Sanchez was indefatigable in his attempts to break clear. With a breakaway specialist’s nose for the right move and the legs of a pure finesseur to drive it on, he was in every significant move – so many that I lost count.

Fantastic race for @LLEONSANCHEZ who attacks and attacks… #Giro101

He wasn’t always happy with either his breakaway companions or the fact the peloton just would not stop chasing.

The presence of Sky’s Wout Poels in the group of four that managed to gain over a minute caused the resigned hand gestures to appear again – the Dutchman at only 10 minutes down being the reason they were chased so hard by Mitchelton-Scott. It wasn’t all needle though. Bidons were shared as the day wore on and there was no time for musettes or top-ups from team cars.

Jens Debuscherre has been dropped! The Lotto FixAll sprinter is out the back as we see a red flag for a couple of corners then back to racing. De Marchi and Sanchez sit up, have a bit of a chat and a smile. Good work. Break caught. 11km to go. #Giro101

By the time the sprint teams brought it back together with 11km to go, Sanchez had been in one break or another for just about 140km – all while looking cool as ice.  Chapeau sir!

In the end we still fought for a stage, working hard until the end, but it just did not work. Yeah, this is the Giro d’Italia of this year – no way for any breakaway so far. – Luis Leon Sanchez.

It was all about the the points jersey for the Quicksteppers today. They didn’t get involved in any chasing, indeed we didn’t see them until they took control in the finale.

We played a little bit today, but I think we played right. The second-to-last (sprint) stage before Rome, and we thought it was perfect for Bennett. If he gained points on us, he would come closer (to the points jersey). We didn’t want to take responsibility, so our next goal would be to win in Rome. For sure if we are having a bunch sprint, I said to my guys, ‘Organize a really good lead out.’ We did perfect – it was amazing today. – Elia Viviani

The win for Viviani just about wraps up the maglia ciclamino for the Italian sprinter who has now amassed 290 points to Sam Bennett’s 232. Understandably the BORA-hansgrohe’s speedster was disconsolate on the line after the sprint did not go to plan. His post stage  interview was just raw emotion…

'I just ran out of road' @Sammmy_Be is absolutely gutted after losing stage 17 to his points jersey @eliaviviani#Giro101 pic.twitter.com/xgL1vXcQ1M

Stage 17, over-simplified: Stage follows traditional script for sprints, but without the boring bit in the middle; fastest guy is still the fastest guy.

Things I loved about the giro today

Tifosi and peloton at the start #SeaofColour

Kenny Elissonde in the break

Nice to be back in action today , And try to make the race hard with @wout.poels . 💨 Now into the mountains ⛰🚲. #giro101 #cycling