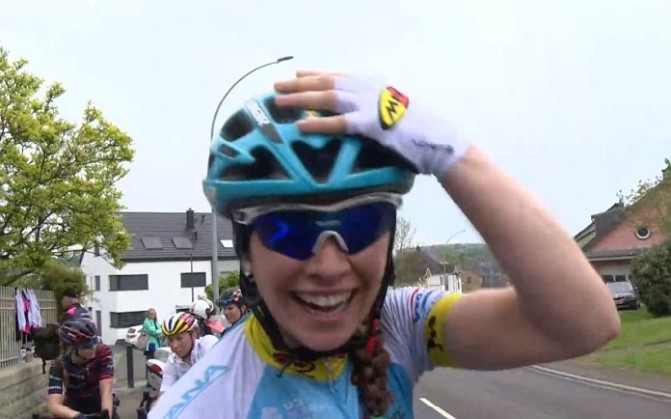 The Tour de Romandie wrapped up with a sprint finish on the streets of Geneva. Over in Luxembourg a fantastic day of racing on the final stage of the Festival Elsy Jacobs ended with the GC turned upside down by a phenomenal young Italian talent.

Love this from two days ago

Letizia Paternoster (Astana Women’s Team) blazed through a chaotic sprint to claim the stage victory, the overall by one second, the points and the best young rider jerseys – she is just EIGHTEEN. Lotta Lepisto (Cervelo-Bigla) and Elisa Balsamo (Valcar PBM) were second and third on the day. With only 12 seconds separating the top 10 on GC, the racing was action packed from the start. Christine Majerus and her Boels-Dolmans team worked hard all day to defend her race lead but had to settle for the second step of the podium with Alexis Ryan (Canyon-SRAM) third at +6secs.  It was a clean sweep of jerseys for the Astana team as Sofia Bertizzolo secured the Queen of the mountains.

Video…  Here’s the sprint finish. The whole stage can be seen here, it’s well worth watching to see a great day of racing unfold

Yellow, green, blue and white: it was an unbelievable @Festival_Elsy for us #elsy18 pic.twitter.com/VhhRGueTeY

Tried with all I had but it wasn’t enough.
Thanks everyone 4 coming out & cheering along the course & if not I hope you enjoyed the livestream (something some of those fancy WWT races don’t have…)
Thanks 2 my team &organisation 4 the work & congrats to @LetiziaPater on the win pic.twitter.com/9K3CZ9Ep32

Thank you @Festival_Elsy and sponsors for organising a professional race, to enabling an open and lasting record of attacking and counter-attacking racing to be captured by @Motomediateam. Hard racing action nuance that would be lost in short highlights videos. #Elsy18