A Tour de Romandie breakaway success in Switzerland and a chaotic Shanghai sprint at the Tour of Chongming Island.

A lumpy day that should have been one for the sprinters finished with a victory for the break-of-the-day, taken by who else but Lotto Soudal’s Thomas de Gendt. The peloton rolled over the line some two minutes later with Sonny Colbrelli (Bahrain-Merida) sprinting to grab second place from AG2R La Mondiale’s Samuel Dumoulin. The GC remains unchanged, Primoz Roglic (LottoNL-Jumbo) goes into Stage three’s mountain time trial a sliver of a second ahead of BMC’s Rohan Dennis with Geraint Thomas (Sky) in third at +0:04secs.

I wanted to post a pic of my victory today and say some motivating words about the team effort and the big help i got @VCampenaerts but instead i’ll show you for whom i am suffering so much. My 2 biggest supporters. They see daddy only a few days a year. Every victory is for them pic.twitter.com/tDnPL702IP

Watch out Tirrenno-Adriatico, Tour Down Under and Itzulia Basque Country. He’s making his plans right now – using WhatsApp if his post stage interview is anything to go by.

Nathan Brown (EF Education First-Drapac p/b Cannondale) started the day just 26 seconds down and certainly gave the GC guys pause for thought when he made it into the break.

“Once I lost contact with him, I still had 3’50 on bunch. If I stayed away, I would still take the yellow jersey. I left it all out there. They got me at 2km. It for sure stings a little, but gives me confidence that I have good form.” (4/5) pic.twitter.com/J55vfhXXWU

Two crashes in the finale – the last with about 250m to go – left many of the favourites out of contention and a select group to battle for victory. Swiftest of these was Giorgia Bronzini (Cylance) with Kelly Druyts (Doltcini-Van Eyck Sport) and Silvia Persico (Valcar PBM) rounding out the podium in second and third respectively.

Video from the Wiggle High5 team. Check out their Instagram account too, they’re posting up a storm.

The peoples champion Giorgia Bronzini, and one very happy DS…

YESS! WE DID IT! thanks for believe in me @CylanceCycling! Amazing girls and staff! pic.twitter.com/PZokHLf8d0

The one nice thing from all the chaos was to see the people’s campionessa, @GiorgiaBronzini take her first win for the year! 🙌🏼🙌🏼🙌🏼 #bravissima #chongming #peopleschamp #wwt

Before start the race I promised to my @CylanceCycling girls we will all wear a wig if we win the 1st stage 🤦🏻‍♂️😂🤣 @UCIWomenCycling pic.twitter.com/YsoPochJTR

Brought everything home except for my @Garmin If anybody finds him, please let me know 🙏 pic.twitter.com/YmTtmpFRCR

Oefffff, landing on the asfalt is never the best way to get off the bike 😦 but kirsten vs asfalt 1-0 💪🏼 and a big thanks for the help during the bonisprints and final from @WiggleHigh5 teammies! pic.twitter.com/uYE9wWY3ot

🔴@Lucygarner94 takes the polka dot jersey as leader of the Mountain Classification at Tour of #Chongming Island🇨🇳after stage 1. #UCIWWT pic.twitter.com/lFXV5ejmXn

All those KOM points count, even the bridges.

Yes, that KOM is on a bridge.

Just in case you were wondering why the UCI-WWT twitter account was behind the times. It’s not that easy live tweeting from China. 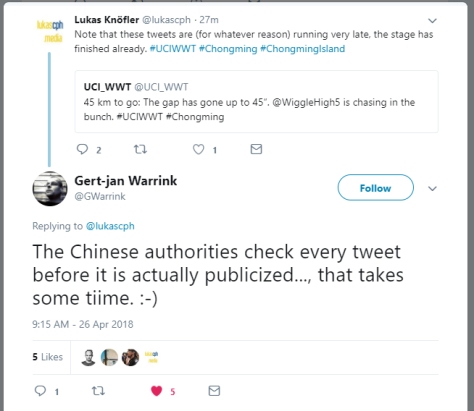