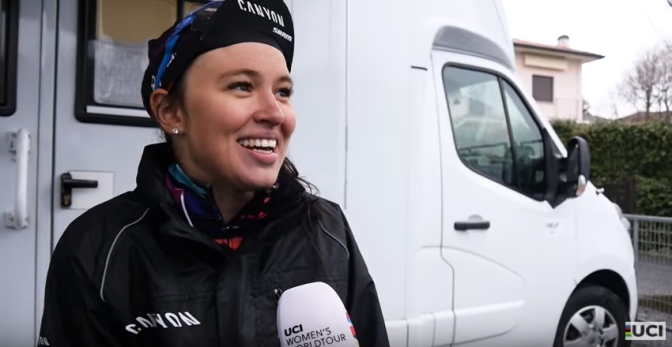 Two daring solo attacks full of fierce joy. What a weekend of racing!!

The first monument of 2018 ended in a ballsy, beautiful, solo victory for Vincenzo Nibali (Bahrain-Merida). Caleb Ewan (Mitchelton-Scott) took the bunch sprint for second with Arnaud Demare (Groupama-FDJ) rounding out the podium.  Watch the video and enjoy cheering him home again… What a racer, what a win.

Second at Strade Bianche, Canyon SRAM’s Katarzyna Niewiadoma claimed the top step with a glorious gutsy solo victory after a fierce attack on the final climb. Holding 8 secs at the crest with 10km to go, she descended like a demon to cross the finish line 23secs before the chase group. Chantal Blaak (Boels-Domans) pipped Marianne Vos (WaowDeals) for second.

Just push as hard as you can and never look back.

#TrBinda "My victory was because of an amazing team. It's been another really tough day because of the weather conditions. We stayed calm and put into practice our plan and I can say on behalf of the team that we were in control of the race" @KNiewiadoma #UCIWWT pic.twitter.com/OlCASgMOv9

I couldn't follow much of the Italian commentary @TrofeoBinda, but "talento enorme" was fairly self explanatory, watching Kasia Niewiadoma ride off the front in the last 10k. Brilliant win! #TrofeoBinda