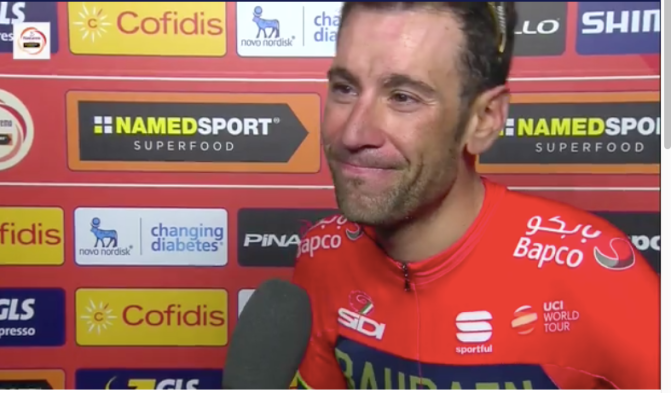 This year’s Milan-SanRemo started with rain and ended in sunshine – and it was a very mixed bagged for the riders as well. There was disappointment along the way with crashes that saw Andre Greipel (Lotto-Soudal) break his collarbone and Mark Cavendish (Team Dimension DAta) hit an unmarked, unattended bollard at speed, causing him to flip over and land horrifically hard on his back. There was of course elation as well, with Vincenzo Nibali (Bahrain-Merida) doing what everyone thought he would do (attacking on the Poggio) but surprised everyone by making it stick! In a nail-biting final kilometre, he kept the chasing pack at bay to win his third career Monument by a few bike lengths over Caleb Ewan (Mitchelton-Scott) and Arnaud Demare (Groupama-FDJ). It’s an edition to remember.Rider of the Race 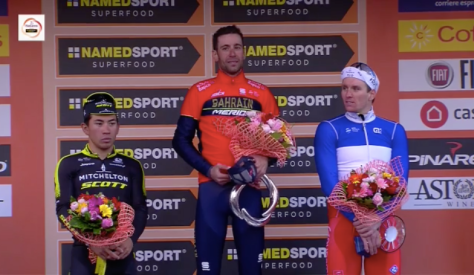 I’m not even going to pretend that I considered anyone else – today’s Rider of the Race goes to Vincenzo Nibali. Everyone knew he was going to attack on either the Cipressa or the Poggio (and predicted failure) – yet when the attack inevitably happened, the riders behind either couldn’t organise themselves quickly enough or didn’t realise the gravity of the challenge laid down before them and they let the Shark of Messina get a gap, which he extended on his daredevil descent down into SanRemo. With 9sec in hand and a charging bunch of sprinters believing they could catch the Italian, from the flamme rouge to the finish, it was one of the most thrilling games of ‘catch me if you can’ this season. While there have been times in Nibs’ career that I’ve been less than enamoured with him, when he gets it right, when he’s willing to risk everything to win and rides with such panache, he’s an amazing rider to watch.

There are a lot of ‘first since’ stats from Nibali’s win – the first win by a Grand Tour winner since Sean Kelly in 1992, first solo win since Fabian Cancellara in 2008 and, certainly for the tifosi out on the road the most important stat, the first Italian to win since Filippo Pozzato in 2006. With four Grand Tour and three Monument trophies in his cabinet at home (two Lombardias 2015, 2017 and today’s), His Nibs has a palmares that other riders can only dream of – and I doubt he’s finished. Riding Flanders for the first time in a few weeks, he looks to want to rival Philippe Gilbert in the #StriveForFive competition. As he’s already placed second in Liege-Bastogne-Liege (2012), don’t count him out in the Ardennes. He’s saying never to Roubaix, but I wouldn’t put it past him – and his cool on the 2014 Tour de France Roubaix stage pretty much sewed the race up for him. Could he resist if that was the only Monument left?

Vincenzo Nibali wins a Grand Tour or a Monument every year since 2013. Crazy stuff. #MSR

Marked out (again) Surprisingly, neither Peter Sagan nor Michal Kwiatkowski figured in the race much at all this year – Sagan put his team on the front intermittently but never got much traction, and Kwiatkowski was near the back when they were going up the Poggio. It wasn’t unlike Strade Bianche a few weeks ago, where they both missed the faint whiff of danger as a rider went off the front, only to be alert to it once there was nothing they could do. Kwiatkowski is normally excellent at reading a race and responding to the moves that make the difference, and Sagan, well, he’s just a beast who is more often than not in the thick of it at the end. But today, looks like the rain in the early part of the 294km race dampened their squibs, with Sagan finishing 6th and Kwiatkowski just out of the top 10 at 11. Or maybe all the trash talk before the race took the fight out of them.

#StriveForFive As mentioned above, Philippe Gilbert is trying to win all five Monuments before his career is over and he had high hopes this year, working with Tom Boonen at the MSR team camp (who I thought was working with Lotto-Soudal now, but maybe it’s a race to race kind of commitment with Tommeke). Whether he could have won or not is a moot point as he was stuck behind the big Cavendish crash, putting paid to any hopes of notching up number 4 (it’s only MSR and Roubaix to complete the set).

Shit day of #Unluck It certainly was for Mark Cavendish, who was riding MSR even though he was still recovering from a broken rib from an opening day crash at Tirreno-Adriatico a week or so ago. That crash was after he went down hard in Abu Dhabi, when he rode into the back of a race car when it braked suddenly, causing him to suffer a concussion and whiplash. News from the team is that he is miraculously fine – with no broken bones, just whiplash (which in itself isn’t something to be shrugged off). Today’s crash was significant also because there was a bloody great bollard in the middle of the road without a flag or a steward to warn the riders. MSR is a dangerous race at the best of times, it doesn’t need these kinds of hazards on the course as well. At any rate, it doesn’t seem to be Cav’s spring, that’s for sure, but I do believe the tweets asking if it was now retirement time for the Manx Missile are a few years premature.

Unluck also heaped a pile of poo on Marcel Kittel today, in the form of tough climbs and what might have been a hunger bonk. Coming off the high of two sprint wins in Tirreno-Adriatico, he must have had high hopes for his first Milan-SanRemo. As with many hopes in cycling, however, these were dashed when he was dropped almost as soon as the peloton started the climb of the Cipressa. The ArgoSunGod was always going to struggle with the climbs – he’s a big, big guy – but to see him being dropped so quickly was a bit of a surprise. “As we came into the final, I was completely empty. I had big problems as we came to the last climbs. It’s a hard reality.”

#MSR "It was definitely a very hard race. I think the most important lesson that I learned today was even when you think you’ve eaten enough, you still need to eat more." @marcelkittel FULL REPORT => https://t.co/TkwVFOMaax pic.twitter.com/aXP3u6HBuw

One thought on “Milan-SanRemo 2018 : The Shark jumps the peloton on the Poggio”