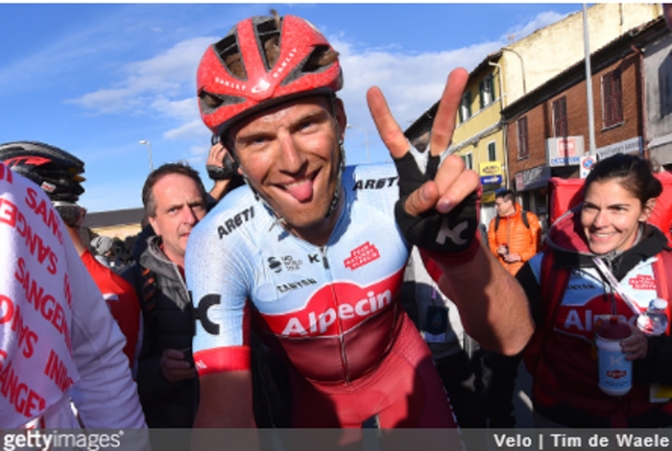 Last chance for the sprinters in the Race of the Two Seas.

It was fast, chaotic and ended in victory number two for Marcel Kittel and his Katusha-Alpecin train. Peter Sagan (BORA-hansgrohe) lost position as he somehow avoided getting tangled in a crash with 8km to go, time-trialled 4km to get back on, bunny hopped over traffic islands to move himself further up and sprinted in for second. Max Richeze (Quick-Step Floors) rounded out the podium. The GC podium remains unchanged with Michal Kwiatkowski (Sky) on the top step.  However, BMC ensured Damiano Caruso picked up a crucial 1sec bonus which puts him at only +3secs from the maglia azzurra.

The 10km TT is going to be a thriller…

Caruso has beaten Kwiatkowski in the last two ITTs at Tirreno. No wonder Kwiatkowski went for those bonus seconds today. BMC shut him down and it could be a lot closer than many expect tomorrow.

The World Champion was on one of those days #SupermanSagan…

These spring stage raced have taken a toll on so many riders and the crash today claimed another Milan San Remo hopeful.. #HealFastFernando

Unfortunately, @FndoGaviria sustained a broken metacarpal on his left hand after crashing earlier today in #TirrenoAdriatico and he'll now require surgery. Join us in wishing him a speedy recovery! pic.twitter.com/fxJJxajDim