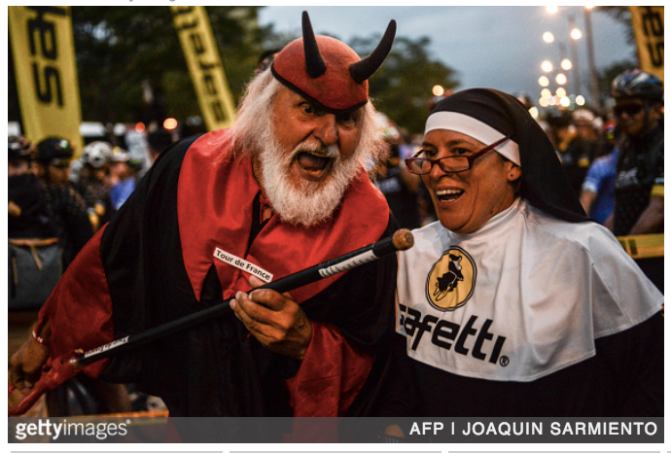 A brand new award to cover all those moments that left us laughing, enraged or just downright perplexed.

Wawa as TdF most combative – really????

Midge: Thomas de Gendt spent over 1000km, nearly a third of the entire race, as part of the breakaway. He won the people’s vote for most combative rider but these staggering statistics were not enough for the jury to award him the Super Combatif prize and a trip to the podium in Paris. They picked Warren Barguil.

Midge: ‘When you gotta go, you gotta go’. We all watched as the race leader Tom Dumoulin came to stop on the queen stage of the Giro. Uh-Oh, puncture? Bike Change? Then the jersey came off, the bibs … The Dutchman retained his jersey but his lead was slashed as arguments regarding whether the group of favourites should have waited raged back and forth.

The behaviour of Gianni Moscon

Kathi: He painted quite a picture this season – and it wasn’t pretty. Racial slurs, accusations of deliberately causing another rider to crash, general overbearing arrogance … don’t see this ending well if he carries on like this.

Sheree: I’ve already nominated this as my ‘if only’ moment but it’s so outrageous I’m nominating it again – what were they thinking?

The only thing highly possible is that I am going to drop every single Pinarello rider from now on, even @chrisfroome if needed #PinarellNO pic.twitter.com/xrcd84WzUu

Panache: Pinarello’s advert for their new electric bike caused a storm of outraged comments – quite right too.

Velocast: Despite having the glorious backdrop of the Izoard and Annemiek van Vleuten‘s dominant win on it, ASO’s La Course continued to confound as the format changed once again, and went back to being a one-day event when all agree it should be growing.

One thought on “VeloVoices Awards 2017: What the hell?”