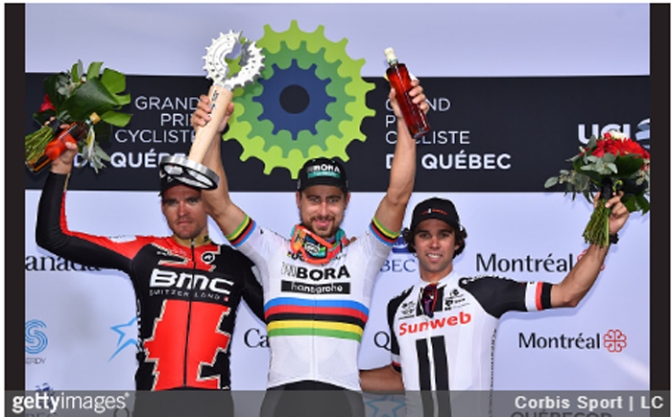 It’s a sprint celebration with a centennial feel. Lets’s party!!!

On a wet day with technical finish Orica-Scott negotiated the final decisive corner perfectly and Caleb Ewan rocketed to stage win number three. Things weren’t quite so smooth for Fernando Gaviria (Quick Step Floors) and LottoNL-Jumbo’s Dylan Groenewegen who finished quite a way back in second and third respectively. The GC podium remains unchanged with Lars Boom holding the jersey by 8 secs from Jumbo Bee teammate Victor Campaenaerts.

He must have been drinking Anglian Water! pic.twitter.com/CwxEwLyNKT

When the Tour of Britain comes to your neighbourhood…

Was it worth it? pic.twitter.com/GJPi9nL1QG

The first of the Canadian WorldTour double bill ended in a fierce bunch battle and a second victory for Peter Sagan – the 100th of his career!!!! On a course that suits the punchy classics men the BORA-hansgrohe team controlled the final laps, delivering Peter perfectly for the Grande Alle uphill drag to the line.  Just like last year BMC’s Greg van Avermaet finished a close second to the World Champion, and will surely be hoping history repeating itself again in Montreal where he claimed the top step. Michael Matthews (Sunweb) finished in third. Looks like we are going to have one heck of a battle for the World Championships in Bergen.

I’m sure we’ll be marking this milestone at VeloVoices Towers. Until then, here’s a gif capturing each of them

Why I love #GPCQM – they give out Quebec maple syrup for prizes. The high quality stuff, not the stuff they send to Ontario.

That’s no way to treat maple syrup. Whatever would Ted King say?

It’s a good thing you can’t spray maple syrup like champagne. Sacrilege for even thinking about it, Peter. #GPCQM pic.twitter.com/TnNJOf6boM

I love the vibe of Canadian WorldTour races, it seems so relaxed. All the teams travel in a charter aircraft together,stay in marvellous hotels and wander the beautiful old streets in their lycra outfits without anyone batting an eyelid.