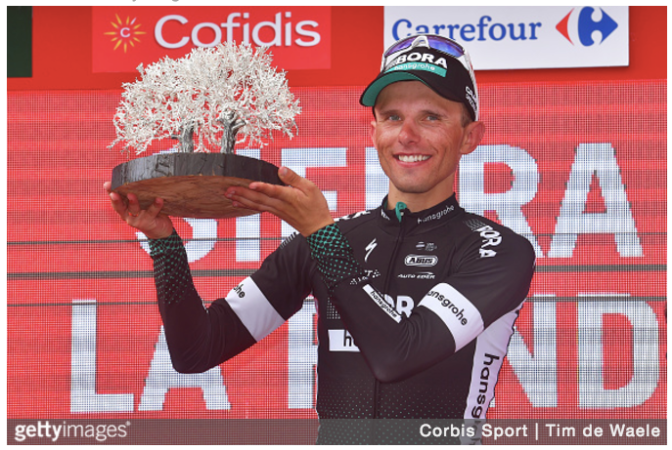 The first HC climb in Vuelta 2017 and it was supposed to be a battle for the stage by the GC boys. But Bora’s Rafal Majka had other plans, getting into a ten-man break early on and soloing to a career-defining stage win on top of La Pandera. Although the GC was shaken up, Chris Froome kept his lead, Vincenzo Nibali put more time into his rivals and Esteban Chaves fell off the podium.

I’d never consider myself a fan of The Winker, but his ride for the stage win today was so full of panache that it would be churlish not to name Rafal Majka rider of the race. Riding all day out front in a ten-man break, it looked touch and go as to whether the peloton would shut the break down before the last climb. Indeed, Trek-Segafredo, Astana and Bahrain-Merida gave it their best shots, riding hard to cut a gap of 7mins to half that by the penultimate climb. Then Katusha took over the riding and blew the peloton to pieces, whittling the time down even more before they blew themselves out with the pace.

The break whittled down to five – with Rui Costa the only rider in that group that could possibly challenge Majka if the GC didn’t swallow them up – the steep 20% ramp coming into the climb of La Paradena broke it up even more. With 10km to go, Majka struck out on his own – and he made it stick, riding an uphill time trial with unbelievable calm as the red jersey group behind him was chaos incarnate. The launch of Miguel Angel Lopez, Astana’s stage 11 winner, was the only point in that final 10km that it looked like Majka could lose it. But Lopez went too late, Majka was too focussed and he made it the third win by a Polish rider in this Vuelta.

Chaos in the GC

While Majka was wading through the crowds on his way to victory, the red jersey group lower down the climb were all-stations chaos. Katusha, trying to set something up for Ilnur Zakarin, rode so hard they blew themselves up – at which point a rested Team Sky (who didn’t have to do any work bringing the break back as Trek, Astana and Bahrain did all the chasing) took over and turned the screws on the remaining group. Oh the bitter pill of unfathomable tactics …

Bedhead Bardet made a stab at glory on the last climb, taking Movistar’s Richard Carapaz with him, then getting caught by Esteban Chaves – which filled all our hearts with joy and hope, only to fall back after some attackity moves from Alberto Contador and Vincenzo Nibali who went on their own quest to catch The Winker. That fell by the wayside as Chris Froome bridged with Lopez – Lopez then went off like he was fired from a cannon – and Zakarin, Chaves and Wilco Kelderman (Yes! Wilco!) were able to hitch back on.

Then it was a race for third place bonus points, which were taken by Nibali, after the group split again, with Nibs, Froome, Zaka and Wilco finishing together and Contador 7sec later. Chaves was distanced and lost 26sec on the Froome group, falling from third to fifth and being replaced on the podium by Wilco Kelderman (Yes! Wilco!).

So once again, the GC was shaken up – all but the race leader and second, two that gained yet more time on their rivals.

I’ve said it before, I’m going to say it again – my heart hurts for Fabio Aru. He tries so hard, he gets distanced but he never just sits down and toodles up the climbs – he rides immodestly as he desperately chases the pack and chases the pack and chases the pack and, for me, it’s just heartbreaking. I don’t know what it is about him, but he always seems so … naive and tender hearted and he’s just getting totalled in these GC battles. And yeah, he’s got a pain face but FFS, Carlton Kirby, stop insulting the guy every chance you get.