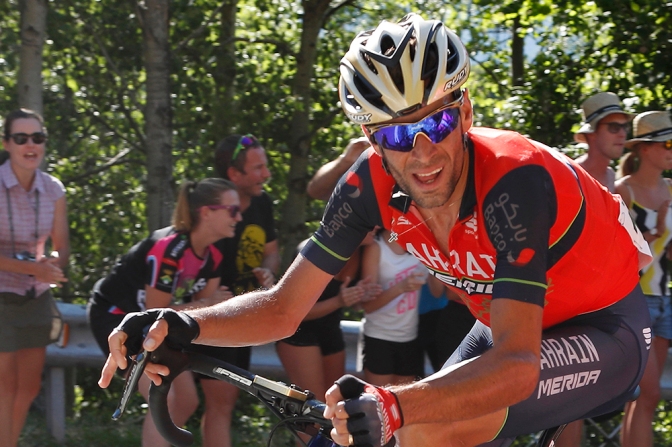 Vincenzo Nibali was dropped on the climbs but he fought back on descent of the Comella to join the leaders. Then in true shark style he harried and stalked down BMC’s Nicolas Roche before storming across the line to take his second Grand Tour stage for Bahrain-Merida. David de la Cruz (Quick Step Floors) grabbed his chance and swept past Chris Froome (Sky) for second. Froome’s crafty attack for the intermediate sprint and bonifications for third place were enough to see him on the race lead podium at the end of the day.

Riders of the Race

You have to love La Vuelta, we’re only on  day three and already the riders faced a day in the mountains. We all expected fireworks in Andorra and the closing kilometres did not disappoint. The award today is shared Sky’s leader Chris Froome, and the only GC contender who could stay with his attack – Esteban Chaves (ORICA-Scott). What a joy to see the smiling Baby Kangaroo right back at his best after a subdued Tour.

It will never thrill me to watch Team Sky race, but there’s no denying that they do what they do well. The Sky- train was deployed on the penultimate climb to shake loose all those with bad legs, and there were many. They upped the pressure on the final ascent with Gianni Moscon setting such a fearsome pace that his captain had to call for him to slow down. You just knew what was coming and when the final man in black peeled away with 8km to go Froome spun it up and got the gap – and right on his wheel was the Esteban Chaves.

The mis-matched pair may have been caught on the run in, but they never looked like being bested on the climb. Here’s what they said post race.

It was a really unbelievable final. Sky did a really good job and I am also really happy because the team works unbelievable and I can stay with Froome on the climb. In the final I can’t really change with him in the flat, but anyway we arrive in the first group and I am happy for that. Chaves

Chaves did a great ride today, he was the only guy who could follow me over the top of that climb. Nibali is very focused on being ready for this year’s Vuelta, he’s still very close and there’s only two seconds between myself and the next group of favourites. I’m going to have to fight for every second I can at every opportunity. Froome

Quickstepper of the day award

You can not keep this team away from the podium. It was never going to be day for race leader Yves Lampaert to keep the jersey, but step up to the plate David de la Cruz. The young Spaniard who showed great form with third place at the recent Vuelta a Burgos, climbed with the best today. Like Nibali, he fought his way back to the elite group on the final descent and narrowly missed grabbing the Italian’s wheel on the run to the line. Second on the stage and second overall, watch this name in the coming days.

The early break contained 4 riders, and one of them was everyone’s favourite breakaway guy (and Panache’s man-crush)  Thomas de Gendt (Lotto-Soudal). I honestly think he just kept riding after the Tour de France.

There's only one break away king in the peloton: Thomas de Gendt. From the Tour down Under untill the Vuelta. Impressive! @DeGendtThomas

Big Ben may not be bonging anymore, but the world goes on: Thomas De Gendt is in the breakaway. #LV2017

And HOORAY he’ll keep on trying

I certainly will keep attacking in this Vuelta. You must often try a lot before you can finally raise your arms, but my ultimate goal is to win a stage in the Vuelta as well. There will be other opportunities later on.

Alberto Contador (Trek-Segafredo) has the pistol victory salute, some riders prefer the two hand in the air or a simple point to the sponsor name. Not Vincenzo Nibali. No, The Shark of Messina regaled us with his very own elasmobranch inspired over-the-line celebration. I’m not sure about it, but I do know an attackity shark will certainly spice the Vuelta up.