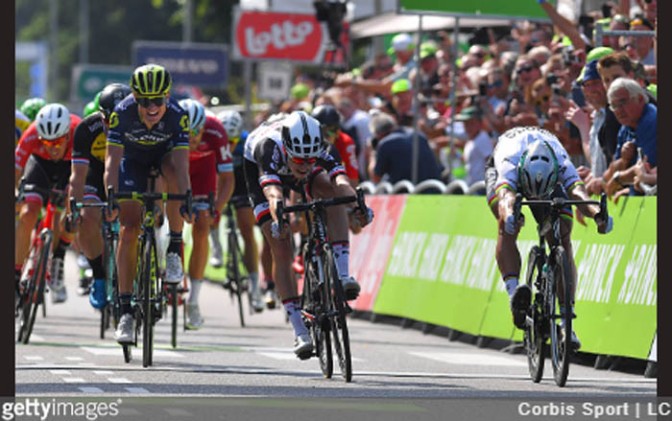 It may well have a new name, but this old favourite stage race still produced the chaotic, close Eneco Tour sprints we’re used to.

Peter Sagan gave BORA-hansgrohe the first stage win and the race lead. However, it took a photo and high powered magnifying lenses to separate him from Sunweb’s Phil Bauhaus after identical lunges for the finish line. Magnus Cort (ORICA-Scott) rounded out the podium.

One, one thousandth of a second…

Peter Sagan:  My body was second, my bike was faster.

Don't know if I'm happy or not, but not a shame to lose with 1mm against the world champion. Congrats to @petosagan #BinckBankTour

BinckBank, it so FUN…

Excellent adherence to team orders from Movistar’s Alex Dowsett. He placed 174th out of 176on the start line, right next to Maceij Bodnar (BORA-hansgrohe) and Tom Dumoulin (Sunweb).

Instructions for today's stage, finish as near the back as possible (for an early tt start due to weather forecast). I must say, I aced it.