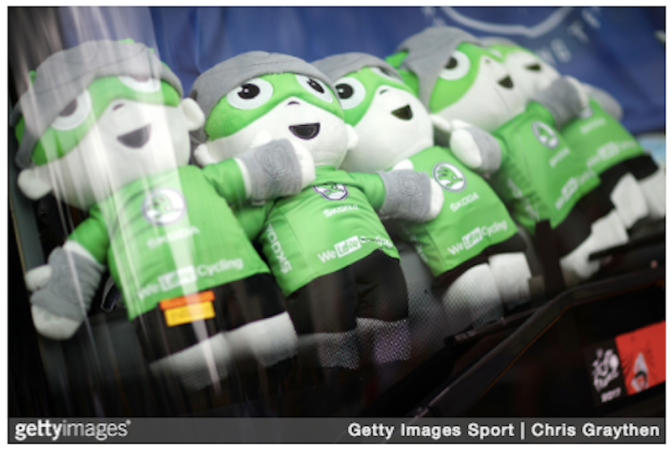 Another one of those few stages where I’m not sure where to begin, what to put in and what to leave out. So, I thought why not start with the ArgoSunGod, Marcel Kittel? Because he’s a beast and we love him. Then it’s on to rules – unwritten, of course. Then we’re in a rather crowded recovery room before we join the gruppetto. Kids, it is TOUR TWEETS OF THE WEEK!

A league of his own

Full of dramatic music – all for the ArgoSunGod

Kittel could be at the back of the peloton eating cassoulet with 2km to go and still win. That’s how reliable Sabbatini is #tdf #tdwtf

FWIW, in the interactions I’ve had with Kittel over the years, he’s always been a gentleman. A very real guy, actually quite humble #TDF17

This is what a SunGod looks like on a queen stage full of climbs. That, my friends, is what I call ‘giving people the dead eye’ – there’s nothing left. Not even the will to comb his hair …

I don’t think this really needs an introduction, does it? If you do, just raise your arm.

Grab some popcorn. Bcz I think it may be time to get rid of "gentleman's rules" WRT mechanicals in stage races. https://t.co/CBHwRzr8Mh pic.twitter.com/9lE7P6ta4g

If we want to get rid of the peloton's unwritten rules, surely all we need to do is write them down? #TDF2017

Mind you, given the cavalier manner in which the actual rules are applied it's hardly surprising folk are confused about unwritten ones. 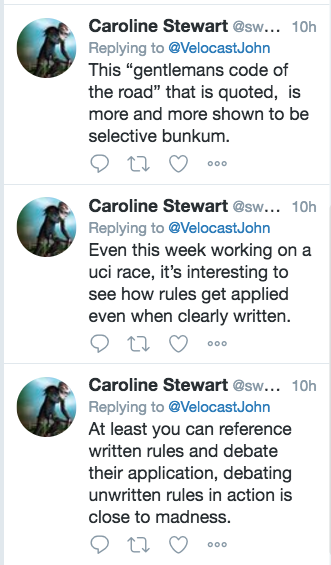 Surely that stage, of any in recent cycling history, was full on from kilometre 0. Everything up fro grabs every second and metre of the way 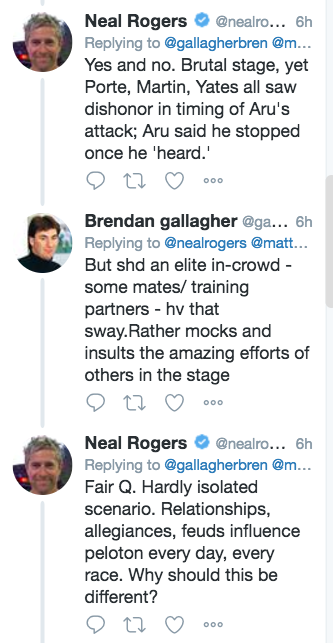 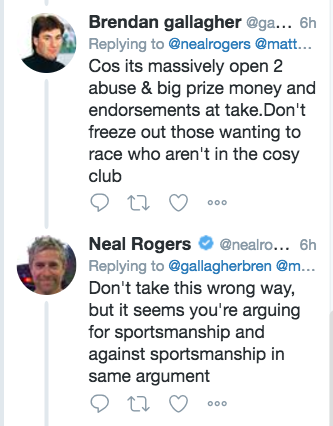 Is it time for these unwritten rules to be binned? Equipment issue? It’s your equipment choice/mechanics fault. Illness? Body failure.

Perfect. I've isolated the yellow jersey. But instead of attacking him I'll help him chase the attack. Yip, just watched 2days stage. Epic.

Why not leave the chase of Bardet to the yellow jersey? None of them think they can beat Froome for GC. They’re sniping for stage wins.

Without a doubt that was the most intense bike race for a long time. #TDF2017

And now a word from the recovery room

Watching the Tour is a bit like watching Game of Thrones. You just get invested in someone and the next minute, they're gone. #sbstdf

Haven't watched today's stage and 100% won't be after reading some of my mates have been hurt. Really hope all who crashed today are ok.

Robert Gesink just has #unluck – he was just coming back into form after a storming stage on Saturday and went down in a crash just a few kilometres into Sunday’s stage and fractured a vertebrae. Here’s to a full recovery!

Out of @LeTour with a fractured vertebrae (L1) 😞fortunately there was a big show to watch on TV. Hope all are okay. pic.twitter.com/AToOKLACMO

Combined with my yellow shirt and some glasses 👓 I'll look like a #Minion the next 6weeks! 🤓 pic.twitter.com/O1jK882u03

It seems that Geraint Thomas is like a magnet and the road surface is steel. He hit the pavement on Sunday … and didn’t get back on the bike due to a broken collarbone. Will he try for the Vuelta? 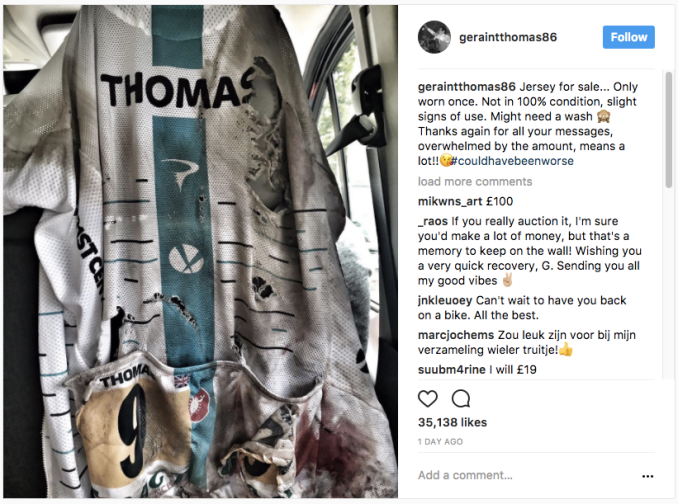 We all saw Richie Porte‘s crash (too many times, if you ask me) and were all so worried to see him stretchered into an ambulance after getting so much treatment on the road. It was a collective sigh of relief when the news came through that his injuries – miraculously – were not anywhere near as bad as it looked. Here’s wishing him the speediest of recoveries.

📹 #TDF2017 @richie_porte speaks about his condition, the crash and his supporters around the world. 📝 👉 https://t.co/tmaSTiZ0RZ pic.twitter.com/sS8lYJVRQS

As a wife of a TDF rider i have tears in my eyes seeing a crash like Richies. I know the worry of how loved ones must be feeling #TDF2017

Oh, poor Bling. That jersey isn’t going anywhere but on the shoulders of the big blond from Germany.

Michael Matthews:"I sent Richie a msg & he replied 'Bring home that green jersey & I'll be the happiest guy on earth'.I got quite emotional"

This is a very sad note. Adriano Malori has announced his retirement from professional cycling. If you recall, the Movistar rider had a terrible accident two years ago, which he never really recovered his form. We wish him the best of luck in the future and every success.

This kid knows class when he sees it!

Moments like these ❤
This boy had photo cards of Koen from all different years! #TDF2017 pic.twitter.com/XhBiBWrO2l

The Mighty Degs is getting closer – he came in second to Kittel on Tuesday’s stage.

For the French speakers among us or fans of snowy white kit.

Some people have been shouting about the Mickey Mouse way the Tour has been run this year but we thought they were speaking figuratively.

No way is that hat aero, Hugh.

They cycle nearly 200km but they’ve still got the energy and racing spirit for this. Gotta love PhilGil – he really wanted to win!

Not a tractor but a very VERY creepy piece of roadside art. 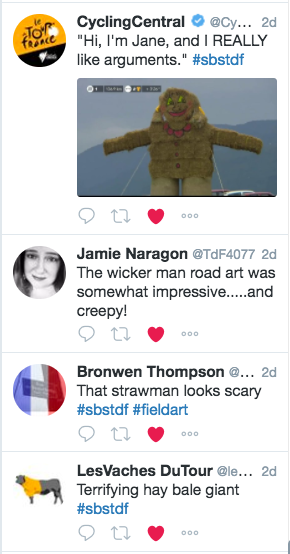 On a scale from 1-10, how bad do you need this restday today? pic.twitter.com/qrd6jJrsHE

I just thought this was very funny.

Mont du Chat is not French for WhatsApp. #TDF

CHATEAUS ARE NOT TRACTORS!

One thought on “Tour Tweets of the Week: Kittel’s lucky 13, unwritten rules, and Wolverine on a bike”