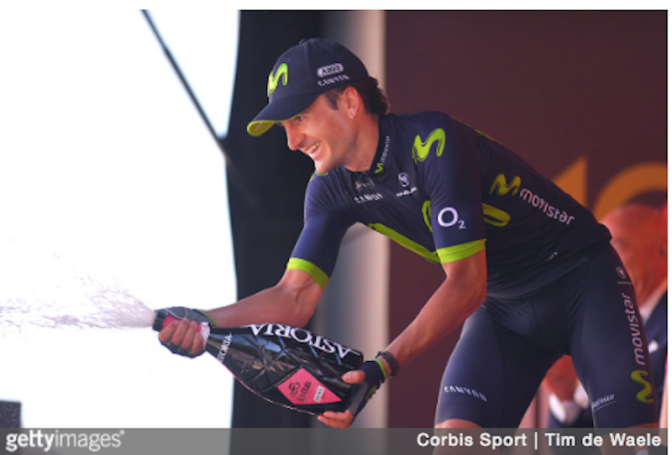 Flat, hilly, tortuous: Giro Stage 8 had it all and the pace was fast and furious throughout. The route demanded patience and power and the winner delivered with Gorka Izagirre picking his moment to take his first Grand Tour stage win. Mikel Landa launched an attack near the end, threatening the lead of Bob Jungels, but a diligent QuickStep team helped the Luxembourg rider retain the pink. Astana’s Luis León Sánchez offered his tribute to his late teammate Michele Scarponi by soloing on a long breakaway and just missing out on the win.

In what looked like a very Basque route, lumpy with a twisty and steep finale, it seemed fitting that a Basque rider took the spoils in exemplary fashion. Gorka Izagirre (Movistar) worked tirelessly, first to chase Sanchez, then to power away from a diminished group to cross the line first, just in front of Giovanni Visconti (Bahrain-Merida), earning the ever-coveted VeloVoices Rider of the Race.

It was a race of two halves: flat as a pancake for the first 90 kms, then a game of attrition for the rest. A climb up Monte Sant’ Angelo saw the first proper attack by Sánchez, who crested first and alone. But the stage was designed for puncheurs and the final 5km to Peschici resembled a skateboarding bowl.

Switchbacks and nervy corners delivered the riders to the last climb up Via Montesanto, with ramps up to 12%. Sagan, Cancellara, Gilbert, Kwiatkowski and dare I say Valverde were all missed in this classic-style finale with 200 metres to the line on paved surface. Like the final climb to Siena in Strade Bianche, this one was to be taken seated for as long as possible, powering up on sheer anaerobic prowess, only standing on the pedals at the last possible moment to dash to the line. Sanchez was very impressive in his effort, taking mountain classification points on the way, but he was caught by a small chasing pack, including a fired-up Valerio Conti (UAE Team Emirates) and (confusingly) Visconti.

Izagirre was part of the chasing group, working hard at the front yet still able to perform some Jedi mind tricks by hiding in such a small group once he’d bridged, to regain some energy. When Sanchez launched his final attack at 8km to go, Izagirre mixed patience with power and retook the lead, taking Visconti with him. Landa threatened to spoil the party but the Movistar rider kept his cool and on the last climb he blasted past Sanchez (after Conti kissed the tarmac on a treacherous turn) and had time for a lengthy salute to the crowd as he crossed the finish line.