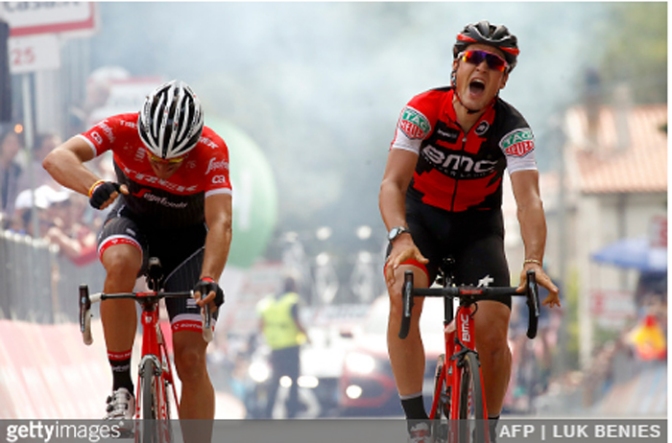 The first stage on the Italian mainland delivered a fizzing will-the-break-make-it finish and a maiden grand tour victory for Silvan Dillier. The Swiss rider put it in the big gear with 150m to go and kept his wheel in front of a fast-finishing fellow escapee Jasper Stuyven. The difference between first and second was centimetres on the road but an ocean of emotion as Stuyven banged his handlebars while Dillier celebrated. Lukas Postlberger has a real taste for this Giro, adding a third place on today’s uphill drag to his victory on stage one. The status quo was maintained amongst the GC contenders, leaving Bob Jungels resplendent in pink for another day.

I just love a stage like this, the sheer sweaty-palmed excitement of watching that tussle between the break and the peloton. The award has to go to one of the five riders who went away and stayed away but who?  Silvan Dillier (BMC) deserves it for never giving up on the the uphill run to the line. Similarly Trek-Segafredo’s Jasper Stuyven who did everything right except win. However, I’m going with Jasper’s young teammate and Giro roommate Mads Pedersen.

Now, most of you know I have more than a passing interest in riders and racing haling from Denmark. However, this is not just because he’s Danish – though you may well imagine the excitement when I saw the first tweets pop up on my twitter line. [We’ve had to pop her with an elephant tranquilliser – Ed]

Mads has been on my list of riders to watch out for a while now, and today he showed all those qualities of strength, aggression and downright ballsiness that I love in a rider. He attacked to force the break at the start of the race. His presence in the group gave the team a huge advantage and he powered along taking huge pulls at the front to make sure it stayed away. With the finale in sight, and having been dropped once, he clawed his way back to make one last huge effort to whittle the break down before grinding almost to standstill, job done. His comments in the team’s stage report show a maturity beyond way beyond his 21 years:

We wanted to get Jasper in the breakaway, and it would be good to have two, so I thought if I was the first guy attacking, Jasper could counter. But suddenly Jasper was in my wheel, and [Lukas] Postlberger was there. So we were three guys, and we went full, full, full for 25 minutes – the worst 25 minutes of my life!

Reports on the Danish press say  his DS is super impressed and that he may be given his own chance at some point. I can’t do anything other than agree with his team. First year at WorldTour level, first Grand Tour… you bet the future is bright! No wonder we chose him as our VeloVoices Giro #YoungDude, I can’t wait to hear what he has to say when Sheree catches up with him later in the race. Oh, and maybe I should fly out to present the award. I wonder what my editor thinks … [Sure! – Ed]

#Giro100 And a big cheer for @Mads__Pedersen after giving everything he has to help this breakaway try & survive. Young talent, big future. pic.twitter.com/vjV9NC9BYF

Quick Step are not only having the best Giro, but they’re also styling it with panache. Will you just look at the trims to those bibshorts #LOVE [I second that #LOVE – Ed]

They’re all the rage

Those Panini Giro d’Italia album stickers are causing a huge buzz. Everyone wants them, and there have been many social media pics of riders and fans all busy swapping and joking about – it’s like being 10 years old again. Even VeloVoices favourite Daniel Oss is getting his sticker excitement on, and he’s not even riding the Giro. What is the probability of finding your own sticker, I wonder?

5 thoughts on “Giro 2017 Stage 6: Dillier delivers a ding-dong battle of a victory”