The unpredictability of life is often what is great about it – but that same capriciousness can be unbearably heartbreaking. And so it was on Saturday when Italian cyclist and bon viveur Michele Scarponi was tragically killed in a collision with a truck on a training ride near his home in Italy. Tributes flooded in all weekend and many, after the initial shock of the event, were memories of a man who was full of charm and warmth for everyone he met. Today’s Tweets of the Week remembers Michele with a smile on his face and a parrot on his shoulder …

Michele Scarponi was one of the most loved riders in the peloton@carltonkirby leads the tributes from Eurosport pic.twitter.com/9CceZyenU3

.@EuroHoody captures perfectly why I'll miss Scarpa. In an era of big riders with big egos, Scarpa always seemed to just be riding his bike. https://t.co/H4lJjfkp6M

One big family. We will miss Michele Scarponi. His humor & always-being-in-good-mood. Our thoughts go to his family & @AstanaTeam teammates

@TonyMartinFans It's hard to believe. The one with the big smile

When Michele touched my leg and was up for a laugh, which seemed to be the case on most days. https://t.co/hfb9cH2zB3

Cycling lost one of its most gregarious personalities today: Tributes for Michele Scarponi. https://t.co/eLxoMRO9KQ pic.twitter.com/24Jdsa3B1R

What a terrible news @MicheleScarponi. I'll never forget the times you started singing a song in the middle of peloton. #RIPMichele

His fine-feathered friend, Frankje, would come along on rides with Michele.

RIP Scarponi – I chatted with him over winter about Frankje-always a funny, exuberant presence https://t.co/aWsmfZGe6T

Michele Scarponi may have won the 2011 Giro, but he was perhaps best known for training with his parrot Frankie.

Why am I so sad about Michele Scarponi's tragic passing? Many reasons- but this is one you should all see:https://t.co/xtdEgS4500

Nibali wins the 2017 Tour of Croatia. More with the heart than his legs. In memoriam Michele Scarponi…#TOC2017 pic.twitter.com/4XaHYuJio4

It was not easy to race, but we did it for Michele… #LBL Photo by @bettiniphoto : https://t.co/byifuyLDPf pic.twitter.com/tgjPDOBuf1

Absolutely devastating to see the tragic news about @MicheleScarponi . One of the nicest guys you could ever meet. RIP my friend. pic.twitter.com/hJrx4hgdoE

@MicheleScarponi, you were the person who brought team spirit up, made us smile in toughest moments, always thinking positively.

We learned of Scarponi's death from NPR headlines at the top of the hour. Even mainstream US media recognizes his importance.

I didn't know you very well but you always showed me respect. RIP @MicheleScarponi and may we all think about his wife and kids #RIPscarponi

This thread by James Gordon is just about perfect. 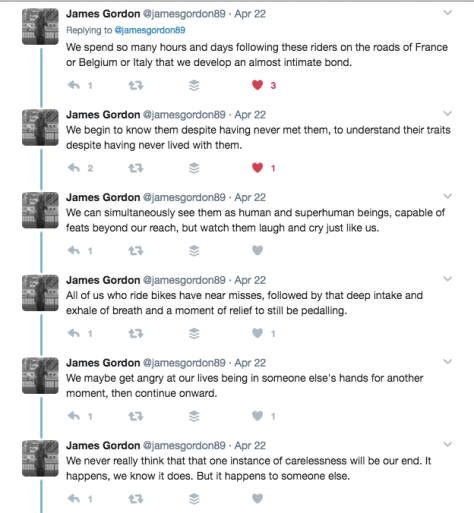 Scarponi to @Gazzetta_it in 2012: 'Some mornings I get lazy, struggle to get up & dressed. But once I'm on my bike, life feels light again.'

2 thoughts on “Tweets of the Week: Let us smile through our tears”