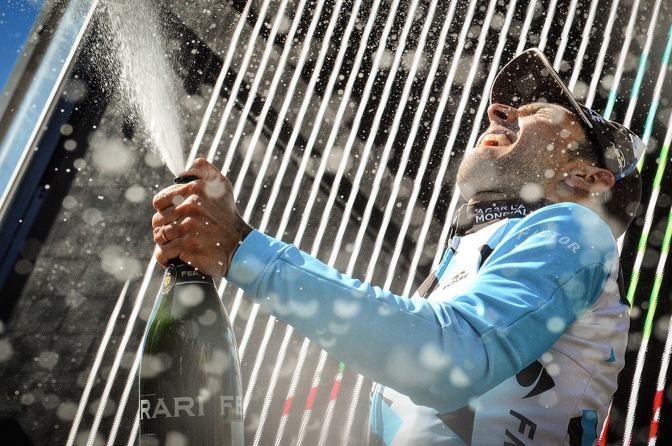 Stage four gave us tension and excitement. A breakaway caught at the flamme rouge, scares for the GC, and a full on unexpected sprint finish. More please.

Matteo Montaguti (Ag2r-La Mondiale) took his first victory in seven years, narrowly edging out Thibaut Pinot (FDJ) with Rohan Dennis (BMC) in third. The sort of result you might expect on a summit finish maybe? Not a bit of it. This was a sprint finish after a hoolie doolie of a stage where the break nearly made it, and Hubert Dupont (Ag2r-La Mondiale) gave Team Sky a heck of a scare. As it was Geraint Thomas (Sky) finished safely in the chase group to retain his lead, Pinot moves back to second place (+13secs) thanks to bonifications.

Highlights (we pick it up with 9km to go)…

I love days like these. There you are keeping half an eye on the race when suddenly twitter lights up. Hubert Dupont started the day at +1:02 from the lead. Attacked out of the peloton with 30km to go on behalf of his leader Pozzovivo. Made a huge solo effort to catch the duo out front. Gave it everything to keep the break away and for several glorious kilometres was the virtual leader. I don’t think anyone would have been upset to see him take his first ever win.

Watching a muted pirate feed of the Italian broadcast of #tota. No idea what's happening but Hubert DuPont is giving it the fucking beans

Ride of the day to Hubert Dupont. Not easy being out there in no-man's-land for so long, real grinta from this guy #TotA

Go Hubert Dupont – 13 years of pro @AG2RLMCyclisme – zero wins in his pro career. Is it going to happen? #tota

Full report at Tour of the Alps site