An epic solo victory, a hard crash, a soft spoon – wow, the Ronde Van Vlaaderen had it ALL! We have Belgian legends Boonen & Gilbert, a sanguine Sagan and much much more! The Twitterstream was teeming with cobbley goodness for today’s Tweets of the Week!

The legend that is Boonen

It was his last Ronde. He was looking for a record fourth title. The crowds at Antwerp clapped him in on the day – oh how I wish I’d been there. 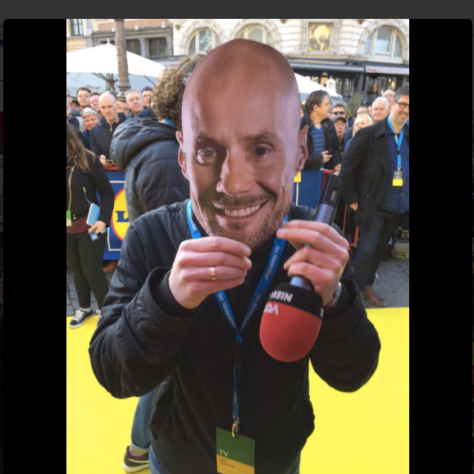 It would have been a fairytale finish – Tom Boonen, arguably the greatest Classics rider of his generation (and possibly of all time), finishing his prestigious career with the Ronde/Roubaix double. I wanted to believe. But alas.

It started out so happily. A wheelie at the presentation – a heroic photograph. SuperSagan was ready.

Then … in a desperate attempt to catch back up after being caught out on the Muur, Sagan, GVA and Oliver Naesen were riding full gas. And this happened. 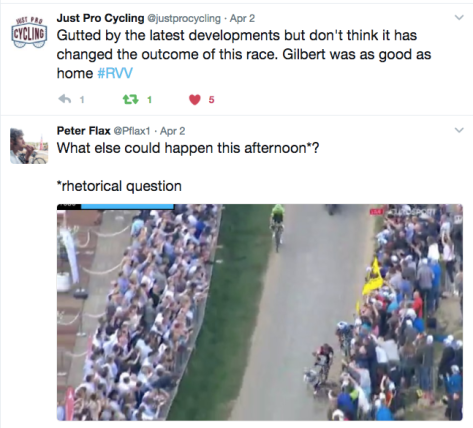 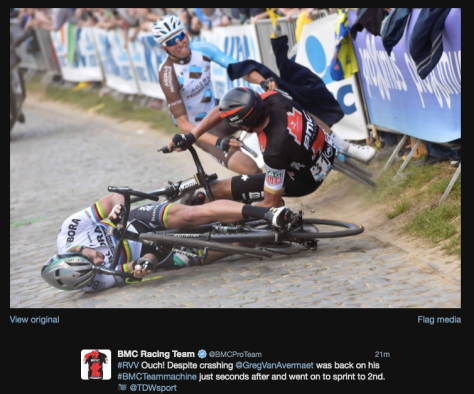 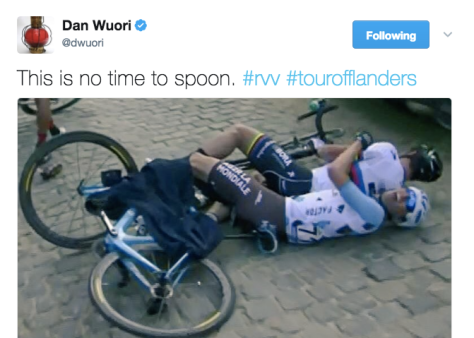 Opinions flew on Twitter – much like Sagan’s sunnies – was it a jacket? Was it a fan’s fault? Did Sagan clip the barrier? What went on? Who is to blame, dammit, WHO!

Apparently #Jacketgate is still a thing – even though it shouldn't be.

This video shows that Sagan got brought down by a jacket snagging his handlebars. And while he was probably seething inside, he did say “These things happen in races” – and he’s right. They do. It’s the price we pay for having such an open sport, where people can get so close to the action. Did the guys put their jackets on the barriers hoping to bring a world champion down? Of course not. They wouldn’t have expected the riders to get that close – that was the risk that Sagan decided to take.

Video that shows my crash at the @RondeVlaanderen was caused by a jacket that caught my left arm. These things happen in races (@Seal_jobs) pic.twitter.com/ZcTorQaG6X

“Ha! Remember when you wouldn’t drag me to the finish so I could win Gent-Wevelgem? Remember how you thought that *I*, Niki Terpstra, should work in the break?! Well! Payback is a bitch, Peter. And now I smash your sunnies!”

Hey Terpstra
This means war
YOU CAN NOT JUST BREAK HIS GLASSES MOTHERFUCKER
Look how sad is he looking at them lmao pic.twitter.com/NRok0B3TUS

Sweet Victory for the King of Belgium

The crash of the two big favourites for the win should not, however, mar the amazing achievement of Philippe Gilbert. Would he have won if they hadn’t crashed? Who knows. But they did crash, he did win and it was a victory earned with grit, guts, patience (riding by yourself for 55km? patience has to play a part) and unbelievable stamina.

It was a bit nip and tuck at the end – could he keep the pace up with GVA, Terpstra and van Baarle riding after him? He could. Chapeau! 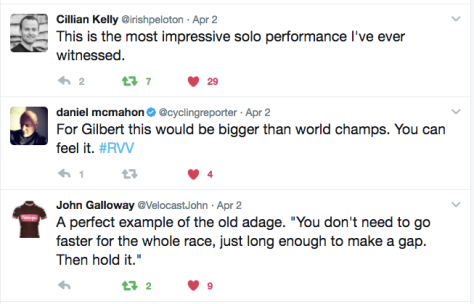 He gets a hug from his mum – and his teammate.

An amazing palmares for Gilbert (‘don’t call me G’) 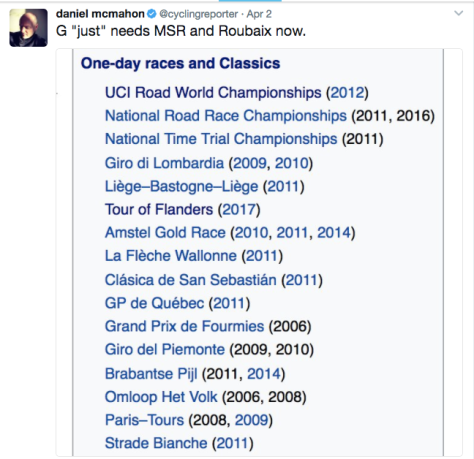 All along the cobbles

Just like some of the cobbled sections, this is the part where I throw all the other great tweets from the race onto the road in a crazy-paving kind of way.

The way we spent this day on Tour of Flanders! #RVV pic.twitter.com/gGQYQtFM25

Cannondale … so unlucky. SO unlucky!

Take some time to have a read of this. It’s fantastic.

Both Sagans were in the race on Sunday. Yes, really.

Only because it was funny – otherwise I would never *ever* allow Ben Stiller in this post. #Unfan 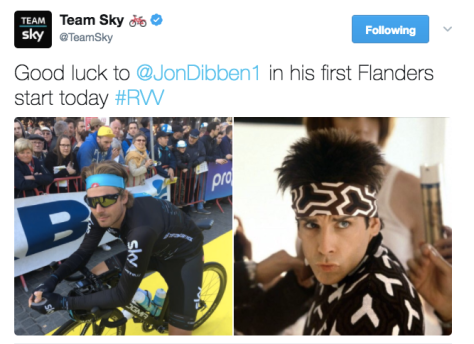 The race was so batshit crazy that Pippo finished 8th. Yes, really!

I love this description of Sylvain Chavanel – so true. And the Muur definitely sang for its supper – an aria even – as with GVA and Sagan missing the Boonen surge, that set up the entire rest of the race. #StayAlert

I hadn’t even noticed the fridge but now that you mention it – what a ride by GVA, though. Trying to catch up nearly the entire race, flipping over Sagan and hitting the cobbles, jumping up and riding with what I can only imagine was the deafening sound of his own heartbeat in his ears, and finishing SECOND! Wow.

I love that Andre Greipel loves the Ronde. The Ronde, however, seems indifferent to him. But one day he might feel the love.

Are there two races on the cycling calendar that are more rock’n’roll than Ronde and Roubaix? No sirree!

Betancourt. He’s still riding? (Well, I should say, he’s actually on a team?)

Swimming pools, yachts … it must be Belgium! 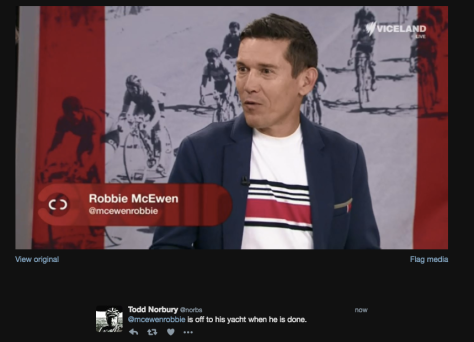 Stunner of a photo from Marshall Kappel. Looks almost apocalyptic … 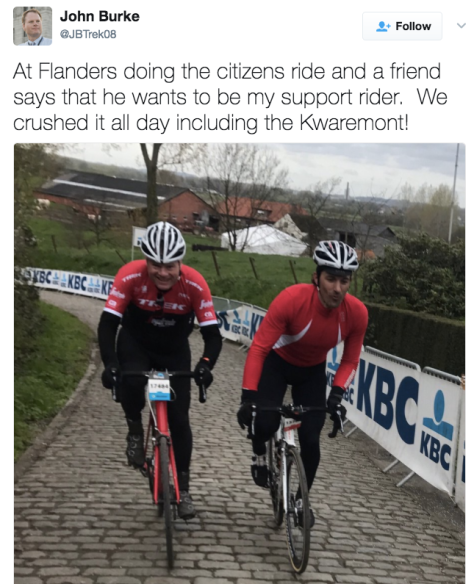 This made us sad … Ashley House broke the news on Saturday. No more #FlechaWatch, no more coordinated wardrobes, no more Contador laughing and smiling through a post-stage interview on Eurosport during the Grand Tours. That is such a shame.  They brought a lightness of heart and a passion for the race to proceedings.

What does Sunday have in store for us? More cobbley goodness …