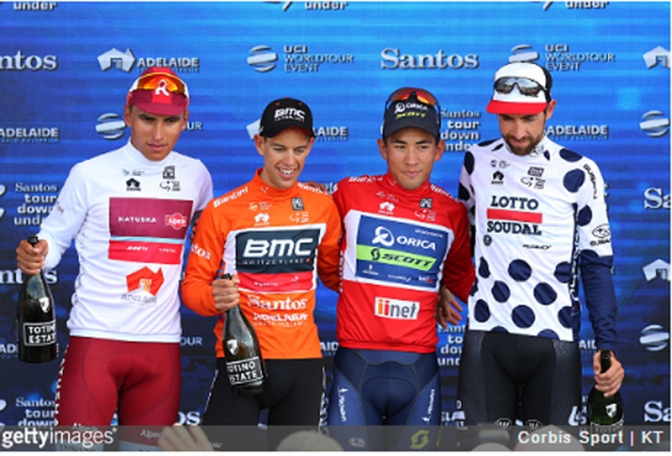 Caleb Ewan made it a record equalling four wins from four sprint stages. Twice the bridesmaid in 2015 and 2016 Richie Porte finally got to walk down the Adelaide aisle in full bride mode (now there’s an image for you all).

Caleb Ewan (Orica-Scott) got the jump on Peter Sagan (Bora Hansgrohe) once again claiming both victory and the sprint jersey. Fast finishing Marko Kump (UAE Abu Dhabi) popped up for third – the team’s their first ever podium finish.

BMC brought Richie Porte safely to the finish with his 48sec lead over Esteban Chaves (Orica-Scott) intact. The fight for third place went right down to the wire as Jay McCarthy (Bora Hansgrohe) claimed a vital 3 secs in an intermediate sprint leapfrogging Nathan Haas (Dimension Data) to the podium. Thomas de Gendt (Lotto-Soudal) got out in the break again and made the polka dot jersey his own. Jhonatan Restrepo (Katusha-Alpecin) was best young rider and UniSA-Australia were delighted to be best team.

It’s all about that low aero, what a shot!

Jack Bauer (Quick-Step Floors) the breakaway king. We LOVE him

Lots of fun at the #TDU start with @estecharu spreading his cheer to @TrekSegafredo & why not, they have the best bikes in the peloton 😍 pic.twitter.com/jDmNsHiEch

One thought on “Final KM: Santos Tour Down Under Stage 6”