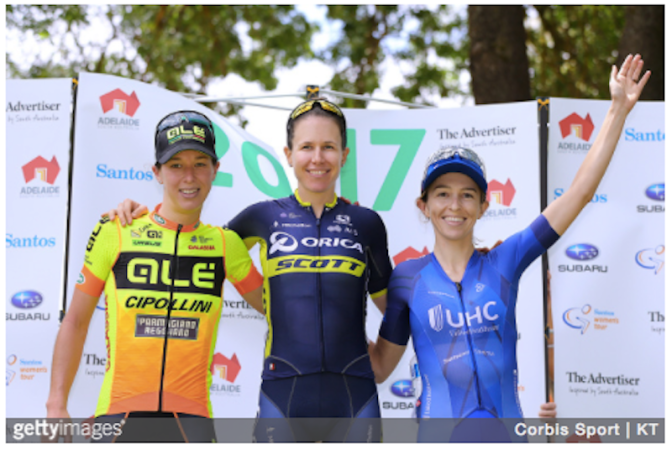 It might be cold, grey and wet here in the northern hemisphere, but the it’s hot, sunny and full of lycra-clad racers down under. Social media abounds with photos of pro-cyclists with cute joeys, stoned Koalas and scary looking snakes – it can only mean one thing.  HELL YES!!! the off season is OVER, people, and we’re shivering on the brink of a great year of racing, I feel it in my bones. Leading the peloton charge is the Santos Women’s Tour.

Longest of the four stages over a constant rolling parcours, and a stinger of an 11% climb at Paris Creek Road with 5km to go. Today was crucial for any team with with GC ambitions. Orica-Scott came with a game plan and they piled the pressure on in the closing kilometres. Amanda Spratt  attacked with 10km to go, kicked again on the last climb with 3km to go drop Ale Cippolini’s Janneke Ensing  to take a strong solo victory by 19secs and a handful of jerseys. Katie Hall (United Healthcare) rounded out the podium, just pipping Dani King (Cylance) in the bunch sprint.

There is no livestream for the Women’s Tour – a fact I can hardly believe we are still having to report. However, as we know by now there are brilliant people who bring the race alive for us, and it is very definitely worth making the effort. Sarah Connolly makes it easy for us with all the details of who, what, and where on her blog  and you can catch her on twitter too @_pigeons_ Our own roving reporter is in Adelaide too, keep up with Sheree on the blog and on Twitter – she’s promising pictures of cute and cuddly animals and as much race action as she can squeeze in!!