I first met Ashley at 2012 Tour de France and we’ve bumped into one another from time to time, more particularly at recent Grand Tours. So, I felt the time was ripe for an interview with this very engaging, popular and charming sports presenter. Having already chatted with his colleague Laura Meseguer about life on Tour, I thought I’d find out about the qualities you need to become a presenter, not to mention the full wardrobe!

Sheree: Let’s go back to the start of your career. After university, you were teaching and then you had a change of heart?

Ashley: I studied Italian and Economics at Durham University and teaching was something I sort of fell into. In some ways it’s very similar to being on television, with one big difference: my audience in a classroom was right there in front of me and now it’s just a camera. The skills are entirely transferable but the audience on a television show is far better behaved!

The television presenting just sort of happened. I did a course in sports’ journalism and started writing about sport. A friend of mine went out to Madrid and started the English language version of Real Madrid television channel and asked if I wanted to come out to Madrid as they needed a presenter. And that’s how it all started. Later, I was frequently coming back to London to present the rugby on Sky, tennis on Eurosport, a bit of football on Channel 5 and so on. In the end the logistics got too difficult, so I just moved back to the UK.

Sheree: So, you worked your way up, did your apprenticeship. According to your LinkedIn profile, you’ve been working constantly.

Ashley: There are many things I’ve done which you won’t find on my LinkedIn profile that have set me up very well but which I don’t necessarily talk about.

Ashley: With my first television job, I had a mentor at the BBC and he advised me to work on a shopping channel. He said it would be the most difficult thing I’d ever do in my entire life and the best preparation for anything else on television. He was right. You’re on air for three hours with no script, so you have to ad lib. You know very little about what’s in front of you, no idea who’s watching, everybody is mucking about in the studio, which comes through your earpiece so you really have to concentrate. I did six months of it and everything I’ve ever done since has been a walk in the park by comparison. You know, I’ve never told anyone else about that in an interview and not a lot of people even know about it.

Sheree: Let’s now turn to your work with Eurosport’s cycling coverage. You and Juan Antonio Flecha have established a great on-screen chemistry. Why do you think that is?

Ashley: Partly, it’s because Juan Antonio is so good. The way he analyses the race, the riders, the teams and their tactics, the way he can read the race as it unfolds – just brilliant. Before I started watching cycling, I thought it was just a load of people racing to see who could get to the finish line first. But, particularly in grand tours, we know that’s not in any way the whole story. It took me some time to get my head around how this sport works, let alone trying to understand it properly.

@tweetingashley have a great day, thanks for everything you do all year for cycling. keep dancing 🐐 https://t.co/IBWtJcqgb7 #dusseldorf2017

I had two brilliant teachers before I did my first Tour de France, both of whom are huge cycling fans. They explained how things worked and a little bit about the tactics. But the more you watch cycling, the more you realise there’s so much more to learn. Having Juan Antonio is extraordinary because he sees things that even other pundits or ex-pros don’t.

At the first Giro d’Italia we did together in 2015, we were standing next to the Astana vehicle with all the bikes on top and Juan Antonio turned and looked at them – they all looked the same to me. He directed the camera to Fabio Aru‘s bike, which had a slightly smaller bottom bracket than the others, an 11 rather than a 12 sprocket. It would’ve taken me a while to count the sprockets. From that moment, I knew Juan Antonio was just going to be incredible to work with. He notices every tiny thing from changes in the road surface, stuff on the side of the road to revs on the motorbikes in the peloton. He’s so good at what he does; he’s easy to work with. Plus he’s funny and by now, certainly, we have such a good rapport that we take the mickey out of one another. Basically, we really enjoy working together.

Sheree: Aside from an ability to get on with people, what other skills do you need in your role?

Ashley: You have to be able to deal with anything, literally anything. Naked people running on set, people pulling your trousers down, without any of that showing on your face. You need to be able to put on a mask and keep it in place, so that you never look stressed or not in control.

Next is the one people find most difficult – you have to be able separate the two parts of your brain so that you can talk and listen at the same time. While we’re on air, I’ll be listening to Juan Antonio, thinking about my next question, with four or five people all talking to me at the same time in my earpiece, all telling me different things. One will be telling me which camera to look at, one will be telling me to turn my body slightly toward the lights, another will be telling me what’s coming up next, someone will be giving me a rundown on the race situation. Then the camera man might point in different directions, so I need to keep an eye on him too.

You also need to be a calm person. I’m someone who never really gets angry, only about once every three years maybe. Of course, when I do it’s horrific and I feel terrible about it afterwards. Next, you have to love what you do, and you have to able to talk for Britain. For example, if we were just about to switch to a video that’s not working, I immediately have to lengthen my 10-second question to maybe 30 seconds while we figure out how to fill that three-minute slot. You have to have a sense of humour and, very important, you mustn’t disagree with the pundits.

In one of my first big jobs presenting rugby for Sky, I was in the studio with Shaun Fitzpatrick and Michael Lynagh. We were watching a Tri-nations game and the referee made a decision I didn’t think was right. In the half-time analysis, we replayed that moment and I asked Michael and Shaun what they thought. Then I made the mistake of explaining what I thought and the voice in my ear said: ” We don’t give a fuck what you think!” [LOL-Ed] So my job is to ask the pundits the types of questions people sitting at home would ask. I have a view but mustn’t express it. I can play devil’s advocate but I can’t say, I don’t agree with them.

Sheree: Okay, now let’s discuss your wardrobe. We love the colour co-ordinated look, the bright trousers, the matching watch. How did it all come about? Do you shop specially? 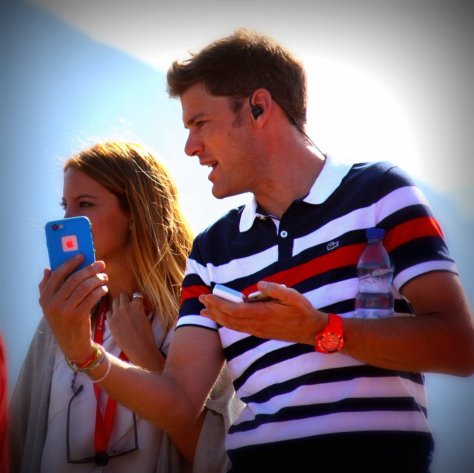 Ashley: Yes I do. At last year’s Giro, I bought their official polo shirts (black with a pink trim and pink with a black trim) and wore one on the show. Almost immediately people responded positively. So the next day, I wore the other polo shirt. Day three, I just wore what was to hand and people were querying why wasn’t I wearing any pink. So, by accident, it became a thing.

Now it has taken on a life of its own and I get criticised if I’m not wearing something in one of the colours of the race’s jerseys. The weird thing is that no one else on any channel in the whole wide world does anything similar! Now it’s something I really enjoy doing so I go out specifically to buy clothes and accessories in pink, yellow, green, white and red. The only thing I haven’t managed to find are some polka dot trousers.

Sheree: You may have to get those specially made. [Dear God, NO! – Ed]

Ashley: I know and I think I will. And the other thing I don’t have is a pink watch for the Giro, largely because I haven’t yet decided whether I can get away with wearing a pink watch…

Yup – normal #Bilbao get-up 😂
No – I will NOT be dressed like this for #VueltaExtra later!!#LV2016 #pink #matador pic.twitter.com/4NGoJmOwr2

Sheree: Oh, I think you can carry it off, no trouble. Let’s talk about your work outside of the sporting arena.

Ashley: Because my degree was in economics, I do quite a lot of corporate and business stuff: seminars, webinars, award presentations, speaking at AGMs, largely for financial institutions. I moderate debates such as the one for Accenture, which was 12 hours on sustainability and involved business leaders and prime ministers. All of which is absolutely fascinating. I really love doing it.

I’m doing more and more cycling for Eurosport. We’re doing the Revolution series again, which this year is along the lines of a global Champions League and, though I can’t be more specific, there’s going to be another series of races that we’re hopefully going to show on Eurosport. So that’s all very exciting. I’m very fortunate that, outside of the grand tours and cycling season, to some extent I can pick and choose what I do. I like to work but I work so I can live and I know how lucky I am.

Sheree: Ashley, it’s been a pleasure. How about a message for my fellow VeloVoices?

One thought on “The Big Interview: Eurosport’s Ashley House”