Today’s largely downhill to the coast sprint stage was never going to match yesterday’s for excitement. Jempy Drucker took a tow on Gianni Meersman‘s wheel and timed his sprint for the line to perfection. He finished a bike length ahead of runner-up Rudiger Selig and third-placed Nikias Arndt. The GC contenders all rolled in together, leaving Nairo Quintana still looking good in the red leader’s jersey.

Here at VeloVoices we love it when a rider like BMC’s Jempy Drucker takes his first Grand and WorldTour victory but, as @irishpeloton was quick to remind us, everyone in today’s top ten was in yesterday’s bumper grupetto, which rolled in some 53 minutes down, well outside the cut-off. Exceptionally they were allowed to continue. Not everyone was in favour of this decision.

Contador: "No motos helped yday, my legs did the work, Sky has no reason to complain. It's unfair for riders who made the cut"#LV2016

Consequently, my Rider of the Race is Luis Angel Mate (Cofidis) from today’s six-man break and one of only two in the break  – the other was Cannondale’s Davide Villella – who finished within yesterday’s time-cut. 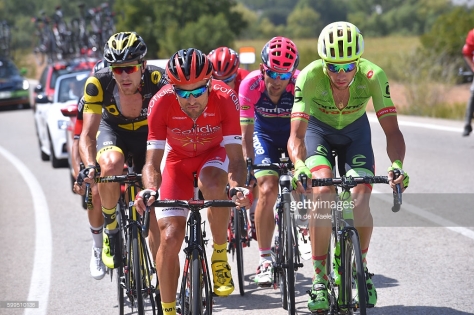 Mate took the honours over Villella on account of the additional effort he made (in vain) to stay away. Doing a Dan Craven™, Mate had asked his followers on Twitter whether or not he should try and get in today’s break. Of course, it was a yes … and he obliged …

The 32-year-old Madrileno has ridden for Cofidis since 2011, the year of his last victory (stage 4 in the Tour of Midi Pyrenees) and has only five victories in his 12-year professional career, though his palmares holds plenty of podium places. A habitué of breakaways, victory today would have been the cherry on the icing for him. I hope our award and being adjudged Most Combative for the second time in this Vuelta (along with stage 10) go some way to compensating him for today’s disappointment!