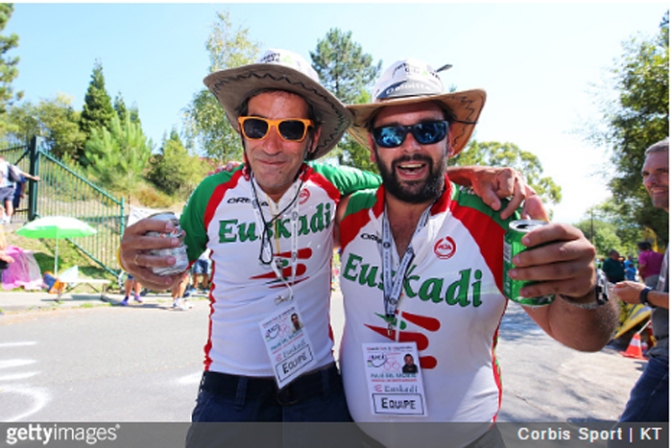 The organisers said the second week of the Vuelta would be the toughest, and boy they were right. From the Alto del Naranco and La Covadonga to the fearsome queen stage finishing atop L’Aubisque, the peloton have done nothing but face climb after climb after climb …

Etixx-QuickStep’s David De La Cruz took it all. His first stage win at his very first grand tour, and a trip to the podium for his home tour leader’s jersey. The young Spaniard launched his winning bid for glory, riding away from IAM’s Dries Devenyns with Moreno Moser (Cannondale) taking third. Our review is here.

Nairo Quintana (Movistar) took his first ever Vuelta victory on this fabled climb and with it the overall lead. The cool-as-a-cucumber Colombian first moved past Tinkoff’s Alberto Contador and then overhauled  Robert Gesink for the win. Sky’s Chris Froome looked to be in trouble on the slopes, but regained his verve and zoomed in to claim third spot on the day’s podium. Our review is here.

After a well-deserved rest day for riders and fans alike, it was business as usual … another summit finish at the Vuelta! Esteban Chaves attacked with gusto but had to give way to the battle between Chris Froome and Nairo Quintana. They sniped and attacked all over the slopes of the Peña Cabarga, with the Sky rider eventually taking a win by the narrowest of margins.  Alejandro Valverde finished six seconds adrift in third, making a great day for Movistar with Quintana still in the red jersey. Our review is here.

Recent first-time father Jens Keukeleire took his first ever Grand Tour victory in a thriller of a finish in the Basque country. Jens launched his sprint early leaving Quickstepper Maxime Bouet and Fabio Felline (Trek-Segafredo) in his wake to make it two wins for Orica-BikeExhange at the Vuelta. The GC came in together and Nairo Quintana (Movistar) remains in the lead. Our review is here.

With 20km to go, Valerio Conti (Lampre-Merida) attacked from the 12-man break of the day and was not seen again. Danilo Wyss (BMC) and Katusha’s Sergey Lagutin placed second and third respectively, nearly a minute behind. With the Queen stage looming, the peloton took it easy and rode piano all day – eventually crossing the line over half an hour after the stage winner. There was no change on the GC. Our review is here.

Three Cat One climbs and a summit finish on the Aubisque. A compelling contest for stage honours, GC contenders in full attack mode, and the Orica boys with an audacious plan. Day trips to France don’t come much better than this! Jumbo Bee Robert Gesink powered away from FDJ’s LePetit™ Kenny Elissonde and Egor Silin (Katusha) in the last few metres to take the Aubisque – and Vuelta Queen Stage – bragging rights. Chris Froome and Nairo Quintana engaged combat mode but finished on the same time so no change in the wearer of the red. Esteban Chaves and Simon Yates move to third and fourth in the overall. [Midge now needs a lie down in a darkened room – ed]. Our review is here.