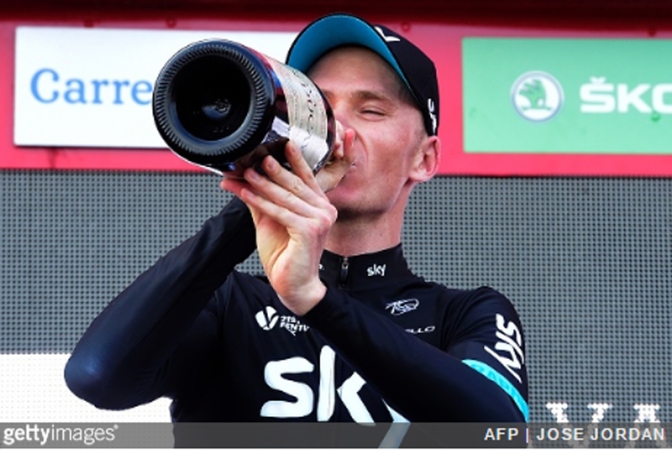 If you like your GC battle ‘red in tooth and claw’, today’s duel on the steep slopes of the Peña Cabarga had it all. Chris Froome (SKY) spun up the cadence and spun back the clock to take a second victory at the summit, repeating his 2011 triumph. He and Movistar’s Nairo Quintana duked it out in the last kilometres, their alternate surges catching a furious attack by Esteban Chaves (Orica- BikeExchange) in the last two kilometres. Alejandro Valverde finished six seconds adrift in third, making a great day for Movistar with Quintana still in the red jersey.

Choices, choices! Wow, what a battle we had on the final ascent. Both Quintana and Froome would be deserving of this award today, as would smiling Esteban for his audacious bid for glory. However, as the Vuelta has produced surprise stage winners, I feel I should honour this tradition and throw a curve ball of my own. Step forward Koen de Kort. Riding his last Grand Tour for Giant-Alpecin (he and the Mighty Degs™ will be seen in a Trek-Segafredo kit in 2017), Koen has been determined from the get go to get into a breakaway. Well, today he made it, and better still he was in the company of team mate Johannes Fröhlinger. It sounds like they had some fun before the pain kicked in…

For once, the break of the day did not battle it out for stage honours: Tinkoff had other ideas. 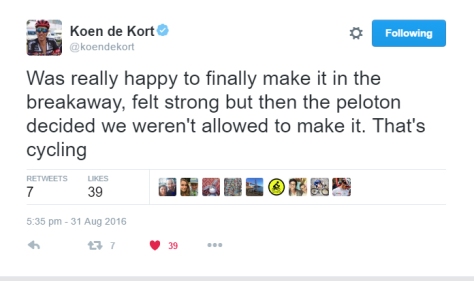 But you can bet your last euro Koen will try again. He and his Giant team mates have had a run of  bad luck that has to end at some point, and why not with the affable Dutchie? One of the many reasons I admire him as a rider is his willingness to engage on Twitter with fans on a wide range of subjects: most recently the spate of crashes and the 3km rule. If you haven’t checked his YouTube Vlogs yet you are missing a treat. Here he is at the start of La Vuelta.

Our tight knit cycling family has been shocked by the loss of another young life. Colombian Diego Suta, 22, lost his life in a crash on a descent at the Vuelta de la Juventud yesterday. All our thoughts go out to his family, friends and team mates.We thought it a fitting gesture for this gesture by fellow countrymen at the Vuelta.