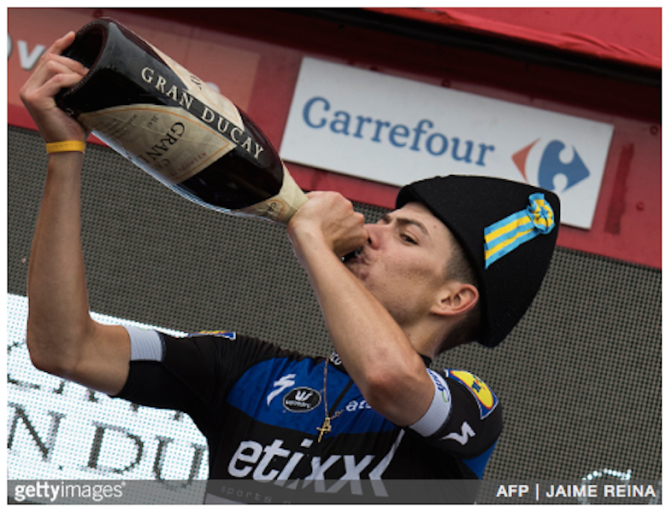 If there’s one thing that makes VeloVoices Towers ring with cheers, it’s the sight of a rider winning their first professional stage – especially when it’s in a Grand Tour. Today, the cheers rang out even louder as Etixx’s David De La Cruz not only took his first professional win, he also went into the leader’s jersey of his home country’s Grand Tour. IAM Cycling’s Dries Devenyns’ slight hesitation in the final 600m meant he finished 27secs behind the Spanish winner while Moreno Moser from Cannondale came in third. All the GC contenders came in together so they just nudged down one to make room for De La Cruz at the top.

It might have been an easy(ish) day for the main GC contenders, but that doesn’t mean that this stage was devoid of emotion. In fact, I defy anyone not to have suddenly got something in their eye when the cameras caught today’s stage winner – and our rider of the race – David De La Cruz tearfully accepting the congratulations from his climbing companion Dries Devenyns. And if that didn’t start you crying, you have a black, black heart indeed if the sight of the Spanish rider on the podium kissing the red jersey with tears in his eyes didn’t put a lump in your throat.

De La Cruz put his win together by getting into the day’s 12-man break, sticking with a blistering pace set by Lotto-Soudal’s Thomas De Gendt as the Belgian hardman duked it out for KOM points with FDJ’s Alexandre Geniez. A series of attacks and a lot of break-men looking around at each other meant that Devenyns and De La Cruz could get away over the crest of the penultimate climb and never been seen again. The two riders worked together to get enough time to ensure the double-digit gradient near the summit of the finish wouldn’t catch them out and it was a bit of cat-and-mouse until Devenyns looked at his pedals and De La Cruz made his break to victory. The peloton didn’t get their act together early enough to keep the Etixx rider from claiming red from Quintana – not a bad day’s prize for his first pro victory! (Irony of the day: Devenyns moves to Etixx next season … so he lost to a future teammate.)

From the very start, we’ve been huge fans of the IAM Cycling team – and their beautiful and elegant kit in all of its manifestations – so it was with a heavy heart we learned that the team would fold at the end of the year. Well, the team might be folding, but the riders’ fighting spirit and fierce joy certainly hasn’t! While Dries Devenyns was within touching distance of winning the stage today, his teammate Oliver Naesen was winning Bretagne Classic Ouest-France.

The team has enjoyed 17 victories so far this season, including most excellent stage wins in each of this year’s Grand Tours: Roger Kluge, Giro Stage 17;  Jarlinson Pantano, Tour de France Stage 15; and  Jonas van Genechten, Stage 7 this week. Add to that, the fact that IAM riders are almost always present and punchy in breakaways and it’s pretty obvious that the team spirit is as strong as ever. With a few months left before they hang up their wheels for winter and get their new team jerseys, we expect to see that beautiful white and navy kit with refined red accents still enjoying plenty of camera time.

When we were recording our Vuelta preview podcast, Midge and I agreed that one of the reasons we so love this race is because new riders get the chance to shine. With that in mind, we couldn’t have scripted this first week better. Nine stages in and we’ve had 8 different stage winners and 7 of those are first time GT stage winners! Sky’s Peter Kennaugh, Stage 1 (first GT victory); Etixx’s Gianni Meersman, Stages 2 (first GT victory) and 5; FDJ’s Alexandre Geniez, Stage 3 (2nd Vuelta career victory); Direct Energie’s Lilian Calmejane, Stage 4 (first pro victory!); OBE’s Simon Yates, Stage 6 (first GT victory); IAM’s Jonas Van Genechten, Stage 7 (first GT victory); Katusha’s Sergey Lagutin, Stage 8 (first GT victory) and, of course, De La Cruz today with his first ever pro win. We are loving this!!!!