The last mountain stage of this year’s Tour de France and while attacks on the maillot jaune over the five climbs would have been welcome, I can’t imagine they were expected by anyone watching today. So it was the race for a top 10 place and a stage win and this fight didn’t disappoint. First on the descent to Morzine, Movistar’s Ion Izaguirre outraced outstanding descenders IAM’s Jarlinson Pantano and Astana’s Vincenzo Nibali to take a fast and furious stage win. There were some changes in the top 10 but not the top 5 positions in the GC.

Rider(s) of the Race

I can’t pick just one rider in this race because there were four who absolutely saved the stage for me. We’ll start with the duo who kicked off the fireworks on the final climb – Jarlinson Pantano and Julian Alaphilippe (Etixx-QuickStep) – when they broke from the remains of the day’s break. Pantano has been a revelation this Tour and there are two things we learned about him in the last few weeks – he’s a demon descender, and he does not give up, no matter how many times he loses contact. The two things we learned about Alaphilippe is that he has an explosive kick that can get him gaps quickly and he seems to have an explosive temper as well. These characteristics stood both riders in good stead in this final set-piece. 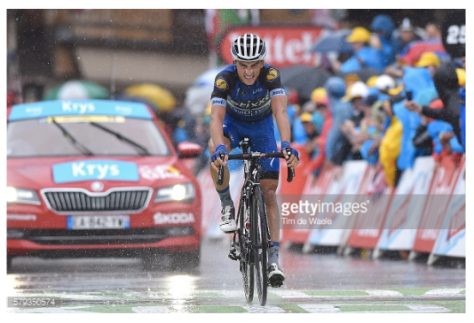 Working together on the climb, Alaphilippe would put in a dig or two every few kilometres, only to find Pantano working his way back up to his wheel. But it was the addition of a charging Vincenzo Nibali that really put the fire under the duo, particularly as we know that His Nibs is a demon descender in his own right. The three yo-yoed off one another on the climb until Alaphilippe lost contact, to be replaced by Ion Izaguirre, who had managed to bridge from the Kreuziger group on the final kilometres of the climb. Knowing the descending prowess of his companions, the Movistar rider did the smart thing and sprinted for the top to be able to get the jump on the downhill. And he dropped down that mountain like a stone – in a downpour – with Nibs and Pantone quickly losing contact. Meanwhile, Alaphilippe recovered himself and was riding like AngryPhilippe all the way to the finish. The Spaniard, however, kept the pressure on, winning the stage by 20sec over the relentless Pantano. The to-ing and fro-ing, the daredevil descending, the rain … these four made the hours of sitting on my candy ass worth it today.

Yesterday’s stage saw Bauke Mollema lose his podium place by being involved in crashes and then just not having the legs. Today, he made a valiant effort to redeem himself by attacking the yellow jersey group on the Joux Plane. He burned brightly for a few kilometres before losing the legs and being swept up and out of the Sky-controlled group. But that brief attack had some serious panache. Thank you, Bauke!

We joke about Fabio Aru a lot but I’m starting to feel really sorry for him. He was supposed to be the Astana leader but it never ever took off. His team left him behind when he had mechanicals, he wasn’t able to make his presence felt – even when his team were riding on the front (supposedly for him), and today, after another blistering ride by Astana, he blew big time with what looked like a hunger bonk. Even members from other teams were giving him encouragement! He came in 17 mins down from Izaguirre. This is one rider who will not be sorry to see the back of this race.

Most combative rider of the Tour

Yes, it was the Velvet Samurai who will be crowned most combative rider for 2016’s Tour de France and today is a good example of the kind of rider he is. Having sewn up the green jersey for another year, Peter Sagan took to the front of the break and nearly rode everyone into the ground, in the service of his teammate Roman Kreuziger who was looking to come away from this Tour with something that would help his contract search for next year. This is one of Sagan’s most admirable qualities – he might be the superstar of the peloton but he works hard for his teammates when they need him (in the opening week of the Tour, it seemed that it was only Sagan who was looking after Alberto Contador). I noticed a comment on Twitter this afternoon, saying that Tinkoff was disrespecting the World Champion by expected him to be a domestique, but I don’t see it that way at all. This is not like when Cav was in the rainbow and was put on bidon-collecting duty every day of the 2012 Tour. With his own goals accomplished, Sagan looks for ways to contribute to his team’s success – and that is to ride like the beast he is – and that honours the rainbow jersey and him as a gracious athlete.

Today’s stage saw Team Sky keep their leader free from attacks and safe on the wet descent to the finish to, for all intents and purposes, wrap up this Tour de France for Chris Froome. While both Froome and Team Sky are polarising for cycling fans, it has to be said (again) that the lack of competition among the main GC contenders isn’t the fault of Sky. Team Sky has a massive operating budget, which they use to sign riders who could easily be leaders in lesser teams. Having 8 potential GC contenders ride on the front of a peloton, one after the other, gives Chris Froome incredible armour to protect himself with. Add to that, the fact that when they come to the Tour, there is one – and only one – leader and there is one – and only one – goal and that is for that leader to stand on the top step in Paris. Astana doesn’t have that focus, neither did Tinkoff, Movistar or BMC – all big budget teams in their own right. So while I’m not a Sky/Froome fan and I find the races that Sky dominate to be, well, not my favourites, they were the only team to come to this Tour with one very clear objective and a plan to reach their goal. I just hope the teams get their acts together for next year …

One thought on “Tour de France 2016: Stage 20 – Izaguirre rides a demon descent to save Movistar’s pride”